A catastrophic drop in atmospheric ozone layers 60 000 to 100 000 years ago likely contributed to a population bottleneck during that period. According to a new study, the event was triggered by the eruption of the Toba supervolcano in Sumatra, Indonesia.

"Toba has long been posited as a cause of the bottleneck, but initial investigations into the climate variables of temperature and precipitation provided no concrete evidence of a devastating effect on humankind," said Sergey Osipov at the Max Planck Institute for Chemistry.

Osipov worked on the study along with KAUST's Georgiy Stenchikov and colleagues from King Saud University and NASA.

"We point out that, in the tropics, near-surface ultraviolet (UV) radiation is the driving evolutionary factor. [The] climate becomes more relevant in the more volatile regions away from the tropics."

"The ozone layer prevents high levels of harmful UV radiation reaching the surface. To generate ozone from oxygen in the atmosphere, photons are needed to break the O2 bond," explained Osipov.

"When a volcano releases vast amounts of sulfur dioxide (SO2), the resulting volcanic plume absorbs UV radiation but blocks sunlight. This limits ozone formation, creating an ozone hole and heightening the chances of UV stress." 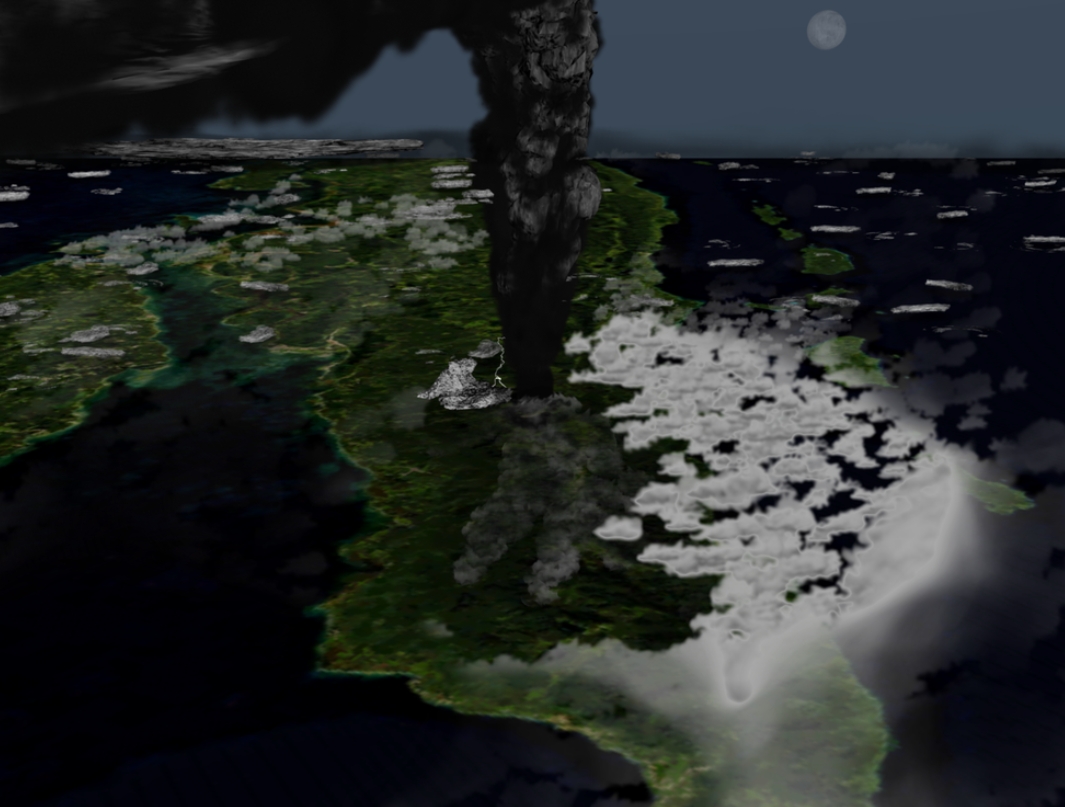 The team studied UV radiation levels after the supervolcanic eruption of Toba (VEI 8) using the ModelE developed by NASA GISS. They simulated the possible aftermath of different eruption sizes.

The climate model suggests that the Toba's SO2 cloud depleted ozone levels by as much as 50 percent and the effects are significant, even under relatively small eruption scenarios.

The health hazards that came from higher UV radiation at the surface would have significantly impacted human survival rates, resulting in a population bottleneck.

"The UV stress effects could be similar to the aftermath of a nuclear war," Osipov noted.

"For example, crop yields and marine productivity would drop due to UV sterilization effects. Going outside without UV protection would cause eye damage and sunburn in less than 15 minutes. Over time, skin cancers and general DNA damage would have led to population decline."

Supervolcano eruptions have occurred throughout Earth’s history and have major environmental impacts. These impacts are mostly associated with the attenuation of visible sunlight by stratospheric sulfate aerosols, which causes cooling and deceleration of the water cycle. Supereruptions have been assumed to cause so-called volcanic winters that act as primary evolutionary factors through ecosystem disruption and famine, however, winter conditions alone may not be sufficient to cause such disruption. Here we use Earth system model simulations to show that stratospheric sulfur emissions from the Toba supereruption 74,000 years ago caused severe stratospheric ozone loss through a radiation attenuation mechanism that only moderately depends on the emission magnitude. The Toba plume strongly inhibited oxygen photolysis, suppressing ozone formation in the tropics, where exceptionally depleted ozone conditions persisted for over a year. This effect, when combined with volcanic winter in the extra-tropics, can account for the impacts of supereruptions on ecosystems and humanity.