An earthquake measuring a magnitude of 5.9 on the open-ended Richter scale hit northwest Turkey late Thursday. A citizen panicked and died after jumping from the window, Kutahya Governor Kenan Ciftci told broadcaster NTV. The epicenter of the quake which struck around 2015 GMT was at Simav in Kutahya province, about 310 kilometers (190 miles) west of the capital Ankara, the agency said, citing the Kandilli seismological institute in Istanbul. 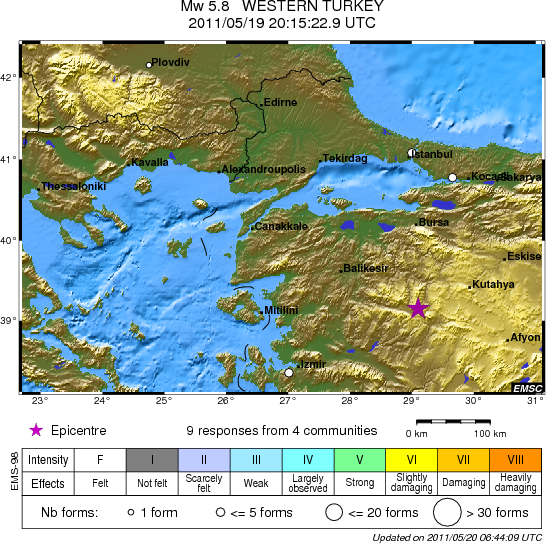 The quake was also felt in the neighboring provinces and as far as Istanbul, it said. Turkish television channels reported residents of the quake-hit region panicked, rushing out into the streets, and telephone lines were jammed making it difficult to contact the area for more information.
A 5.9-magnitude quake could be expected to cause damage in Turkey due to substandard home construction. An earthquake in Kutahya province in 1970 killed more than 1,000 people. And in 1999, two strong quakes in the heavily populated and industrialized regions of northwest Turkey left some 20,000 dead. (AFP)