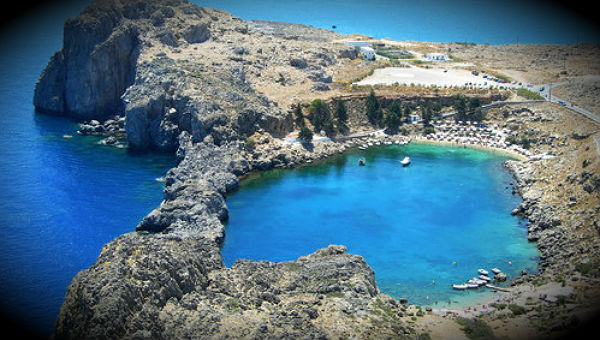 Most shallow earthquakes in central and northern Greece (depths less than 50 km) result from interaction between the Eurasia plate and the small Aegean Sea plate, which is moving southwest with respect to the Eurasia plate with a velocity of about 30 mm/year. The boundary between the Aegean plate and the Eurasia plate in central and northern Greece is diffuse. The Aegean Sea Plate (also called the Hellenic Plate) is a small tectonic plate located in the eastern Mediterranean Sea under southernGreece and far western Turkey. Its southern edge is a subduction zone south of Crete, where the African Plate is being swept under the Aegean Sea Plate. To the north is the Eurasian Plate which is a divergent boundary responsible for the formation of the Gulf of Corinth.

Shallow-focus earthquakes also occur in the volcanic arc that is associated with the subduction of the Africa plate beneath the Aegean Sea plate, in the Dodecanese and Cyclades Islands, over 100 km north of Crete. The region near the volcanic arc is characterized by normal faulting. The magnitude 7.8 earthquake of July 9, 1956, south of Amorgos, produced a large tsunami that affected the entire Aegean Sea. (USGS)

A belt of shallow-focus seismicity along the western coast of Greece to the north of Lefkada, and extending north along the Adriatic coast of the Balkan Peninsula, is characterized by reverse fault earthquakes occurring in response to northeast-southwest crustal convergence. 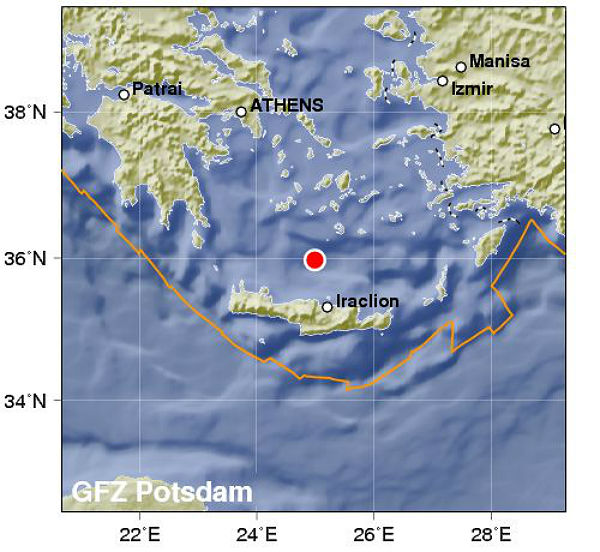 The Aegean area today is part of a microplate lying between the Eurasian, African and Arabian tectonic plates which is moving in a south-westerly direction. At its southern edge (about 100 kms to the south of Crete, at the Hellenic Trench, c. 4000 metres deep), it is pushing up over the African plate at a rate of a few centimeters per year. Crete has moved 400 kms nearer to Africa over the last 13 million years! The island itself is the remnant of a continuous fault massif, created more than 30 million years ago and forming a wide arc from the Peloponnese across what is now the Aegean Sea, via Crete and the southern Greek islands, to the mountains of Anatolia. Tectonic movements caused the Aegean plate (the landmass called Aegaeis) to weaken and sink below sea level, so that what were once the peaks of its mountains gradually became islands. These movements are on-going and affect the Aegean volcanic arc (which includes the active volcanos of Thera and Nisyros) that runs directly north of Crete, so it is not surprising that the island lies in the most geologically active area of Europe today, and is no stranger to earthquake activity. When Aegaeis sank and the waters flooded in to form islands.

About 10 million years ago a group of little islands that later formed Crete became permanently separated from the Peloponnese, and from Karpathos to the east. Over a period of several million years during the Pliocene period the plants and animals that lived in isolation on these little islands of Crete either kept their ancient identity or began to evolve into new species, resulting in the high degree of endemism found on the island today. Crete has acquired its present form from the folding, subsidence and uplifting of the land which began about 4 million years ago. In fact, the movement is still going on.

The western part of the island is rising faster than the eastern part, a fact which can be seen at Falássarna on the west coast, where it is clear that the ancient harbour became ‘high and dry’ through uplift of the land as time went on and had to be abandoned; by contrast in the east of Crete, the foundations of the ancient city of Olous are underwater.

The rocks of Crete range from pre-Neogene limestones of the Permian to Oligocene periods, which form most of the mountain massifs and karst landscape and erode to produce dark red, iron- rich soil, to softer neogene and quaternary limestones, found in the lower-lying plains and coastal areas, and eroding to a yellowish-brown soil. There are also calcium-free formations including granite, as well as high pressure metamorphic rocks such as phyllite, sandstones, and schists. Roughly speaking, the pre-neogene rocks of the alpine sequence are the remnants of the little islands which formed Crete, while the neogene sediments indicate areas covered by the sea at the time. Always a land of contrasts – Crete is both young and old at the same time! (Alpine.gr) 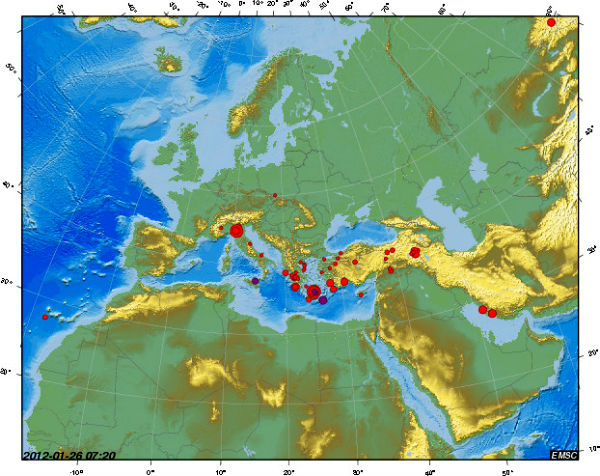