University of Alberta-led research has confirmed that a relatively harmless inorganic form of mercury found worldwide in ocean water is transformed into a potent neurotoxin in the seawater itself.

After two years of testing water samples across the Arctic Ocean, the researchers found that relatively harmless inorganic mercury, released from human activities like industry and coal burning, undergoes a process called methylation and becomes deadly monomethylmercury. Unlike inorganic mercury, monomethylmercury is bio-accumulative, meaning its toxic effects are amplified as it progresses through the food chain from small sea creatures to humans. The greatest exposure for humans to monomethylmercury is through seafood.

The researchers believe the methylation process happens in oceans all over the world and that the conversion is carried out by microbial life forms in the ocean. The research team, led by recent U of A biological sciences PhD graduate Igor Lehnherr, incubated seawater samples collected from the Canadian Arctic Archipelago.

Lehnherr says conversion of inorganic mercury to monomethylmercury accounts for approximately 50 per cent of this neurotoxin present in polar marine waters and could account for a significant amount of the mercury found in Arctic marine organisms. The researchers say this is the first direct evidence that inorganic mercury is methylated seawater.(TerraDaily) 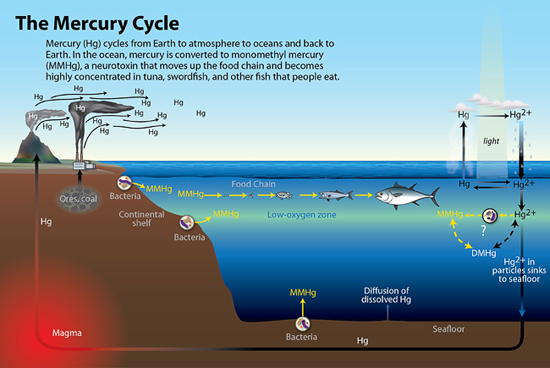 In the past, methylmercury was produced directly and indirectly as part of several industrial processes such as the manufacture of acetaldehyde. Currently there are few anthropogenicsources of methylmercury pollution other than as an indirect consequence of the burning of wastes containing inorganic mercury and from the burning of fossil fuels, particularly coal. Although inorganic mercury is only a trace constituent of such fuels, their large scale combustion in utility and commercial/industrial boilers in the United States alone results in release of some 80.2 tons (73 tonnes) of elemental mercury to the atmosphere each year, out of total anthropogenic mercury emissions in the United States of 158 tons (144 tonnes)/year. Natural sources of mercury to the atmosphere include volcanoes, forest fires and weathering of mercury-bearing rocks.

Methylmercury is formed from inorganic mercury by the action of anaerobic organisms that live in aquatic systems including lakes, rivers, wetlands, sediments, soils and the open ocean. This methylation process converts inorganic mercury to methylmercury in the natural environment. Acute methylmercury poisoning occurred at Grassy Narrows in Ontario, Canada (see Ontario Minamata disease) as a result of mercury released from the mercury-cell Chloralkali process, which uses liquid mercury as an electrode in a process that entails electrolytic decomposition of brine, followed by mercury methylation in the aquatic environment. 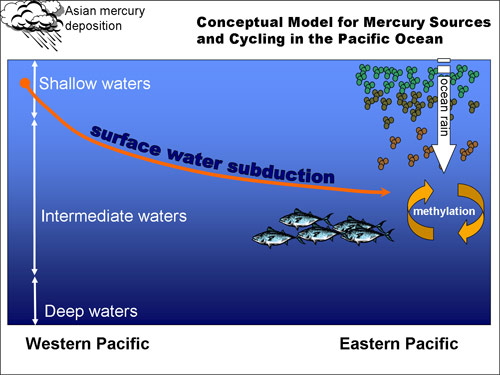 In recent years, there has been increasing recognition that methylmercury affects fish and wildlife health, both in acutely polluted ecosystems and ecosystems with modest methylmercury levels. Two reviews document numerous studies of diminished reproductive success of both fish, fish-eating birds, and mammals due to methylmercury contamination in aquatic ecosystems. A study by U.S. researcher Peter Frederick suggests methylmercury may increase male homosexuality in birds: Except a control group, all of 160 captured young ibises were given small amounts of methylmercury with their food. The reproductive behaviour of these coastal wading birds changed in such a way, that the more methylmercury was ingested the more male birds choose to build nests with other males, and snub females. (Wikipedia)

Amount of Mercury Entering the Ocean