Eruption of magnetic canopy of sunspot 1190

The magnetic canopy of sunspot 1190 erupted on April 15th, producing an M-class solar flare (SDO movie). The brief blast did not, however, hurl a cloud of plasma toward Earth. NOAA forecasters estimate a 55% chance of more M-flares during the next 24 hours. (SpaceWeather)

Solar activity is increasing with Multiple C-Class flares and an M1.3 Solar Flare at 17:12 UTC Friday. Sunspots 1190 and 1193 both could produce an M-Class flare. As per the latest SWPC update, a Solar Filament exploded and a possible CME may be partially earth directed. The solar flux has increased to 129.

NOAA Solar Report
Solar activity increased to moderate levels. Region 1190 (N13W26) produced an M1/1F flare at 15/1712Z. Associated with this event were discrete radio emissions ranging from 4995 MHz - 15400 MHz. Occasional C-class flares were also observed during the period. Region 1190 and Region 1193 (N17E44) remain the most significant regions. Both Regions 1190 and 1193 showed increases in areal coverage. A filament was observed lifting at 14/2324Z on GOES SXI. A CME was observed on SOHO/LASCO C2 imagery at 15/0036Z, with a speed of approximately 390 km/s. STEREO imagery showed the CME is expected to be geoeffective. 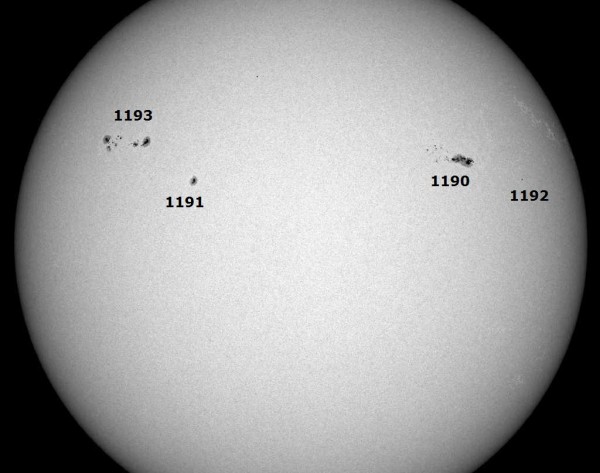 Solar activity is expected to be at low levels, with C-class flares expected for the next three days (16-18 April). There is also a slight chance for M-class flares during the period.