Finally, WISE team has released a data from its sky-mapping mission representing 57 percent of the sky as seen by WISE. This preliminary release will allow astronomers and astronomy enthusiasts worldwide to explore the sky as seen by WISE. It will also allow the WISE team to apply any lessons learned to the final release of the data next year that will cover the whole sky.

Many of the targets in the celestial catalog released online this week have been previously observed, but there are significant new discoveries. The mission's finds include more than 33,000 new asteroids floating between Mars and Jupiter and 20 comets. WISE ran out of coolant in October, making it unable to chill its heat-sensitive instruments and observe faraway objects. So it instead spent the next four months seeking out near-Earth asteroids and comets that should help scientists better calculate whether any are potentially threatening. The spacecraft went into hibernation in February. 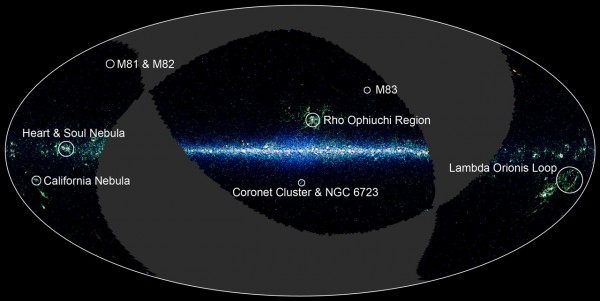 The WISE Preliminary Release includes data from the first 105 days of WISE survey observations, 14 January 2010 to 29 April 2010, that were processed with initial calibrations and reduction algorithms. Primary release data products include an Atlas of 10,464 calibrated, coadded Image Sets, a Source Catalog containing positional and photometric information for over 257 million objects detected on the WISE images, and an Explanatory Supplement that provides a user's guide to the WISE mission and format, content, characteristics and cautionary notes for the Release products.

Ancillary release products include an archive of over 754,000 Single-exposure Image sets and database of over 2.2 billion source extractions from those images, and moving object tracklets identified as part of the NEOWISE program.

Access to the WISE Preliminary Release Image and Source data products is via the on-line services of the NASA/IPAC Infrared Science Archive (IRSA). NEOWISE-reported moving object tracklets are accessed from the IAU Minor Planet Center.

"This publication makes use of data products from the Wide-field Infrared Survey Explorer, which is a joint project of the University of California, Los Angeles, and the Jet Propulsion Laboratory/California Institute of Technology, funded by the National Aeronautics and Space Administration." 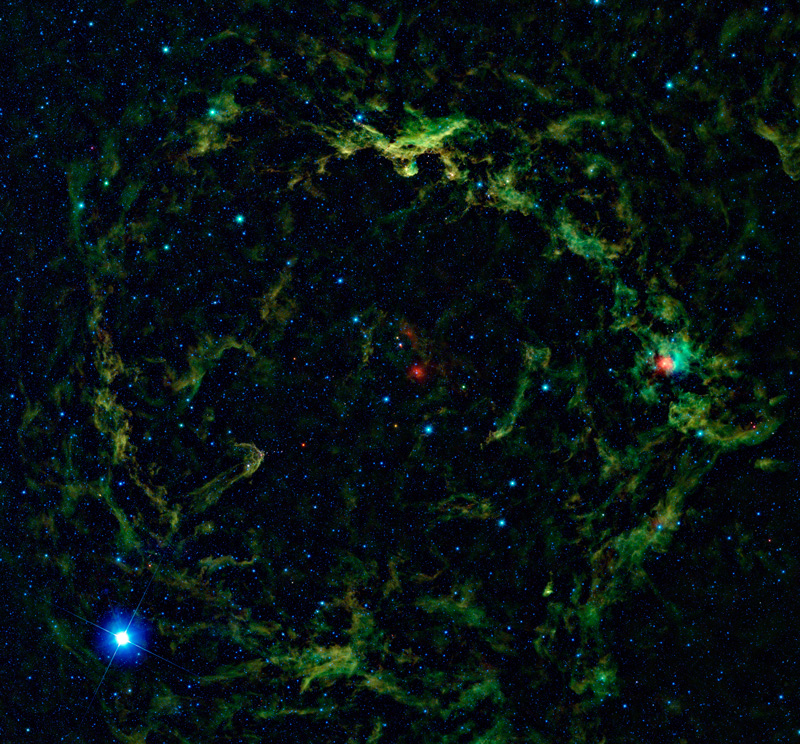 In Greek mythology, Orion was a hunter whose vanity was so great that he angered the goddess Artemis. As his punishment, Artemis banished the hunter to the sky where he can be seen as the famous constellation Orion. In the constellation, Orion’s head is represented by the star Lamdba Orionis. When viewed in infrared light, NASA’s Wide-field Infrared Survey Explorer, or WISE, reveals a giant nebula around Lambda Orionis, inflating Orion’s head to huge proportions.

Lambda Orionis is a hot, massive star that is surrounded by several other hot, massive stars, all of which are creating radiation that excites a ring of dust, creating the "Lambda Orionis molecular ring." Also known as SH 2-264, the Lambda Orionis molecular ring is sometimes called the Meissa ring. In Arabic, the star Lambda Orionis is known as “Meissa” or “Al-Maisan," meaning “the shining one."The Meissa Ring is of interest to astronomers because it contains clusters of young stars and proto-stars, or forming stars, embedded within the clouds. With a diameter of approximately 130 light-years, the Lambda Orionis molecular ring is notable for being one of the largest star-forming regions WISE has seen. This is also the largest single image featured by WISE so far, with an area of the sky approximately 10 by 10 degrees in size; equivalent to a grid of 20 by 20 full Moons. Nevertheless, at less than 1 percent of the whole sky’s area, it is just a taste of WISE data.

The bright blue star in the lower left corner of the image is the star Betelgeuse, which represents one shoulder of the hunter Orion. The name Betelgeuse is actually a corruption of the original Arabic phrase “Yad al-Jauza',"meaning “hand of the giant one." Betelgeuse is well known for being a red supergiant star, yet in WISE’s infrared view it appears blue, as do most stars in WISE images. This is because most stars, including Betelgeuse, put out more light in the shortest infrared wavelengths of light captured by WISE, and those shorter wavelengths are presented in WISE images as blue and cyan.

In visible light, Orion’s other shoulder is clearly marked by the variable star Bellatrix. In infrared light, however, Bellatrix is a somewhat unremarkable cyan-colored star in the right side of the image. In Latin, Bellatrix means “female warrior," which is perhaps why the name was chosen for a female witch character in the popular Harry Potter books.

Also seen in this image are two dark nebulae, Barnard 30 and Barnard 35, which are parts of the Meissa ring that are so dense they block out visible light. Barnard 30 is the bright knob of gas and dust in the top center part of the image. Barnard 35 appears as a hook extending towards the center of the ring just above and to the right of the star Betelgeuse. The bright reddish object seen to in the middle right part of the image is the star HR 1763, which is surrounded by another star-forming region, LBN 876.

Color in this image represents specific wavelengths of infrared light. Blue and cyan represent 3.4- and 4.6-microns, primarily light emitted by hot stars. Green and red represent 12- and 22-micron light, which is mainly radiation from warm dust.