In an unexpected juxtaposition of cosmic objects that are actually quite far from each other, a newly released image from NASA's Wide-Field Infrared Survey Explorer (WISE) shows a dying star, called the Helix nebula, surrounded by the tracks of asteroids. The nebula is far outside our solar system, while the asteroid tracks are inside our solar system.

The portrait, discovered by chance in a search for asteroids, comes at a time when the mission's team is celebrating its fourth launch anniversary — and new lease on life. In August, NASA decided to bring WISE out of hibernation to search for more asteroids. The mission was rechristened NEOWISE, formerly the name of the asteroid-hunting portion of WISE.

"I was recently looking for asteroids in images collected in 2010, and this picture jumped out at me," said Amy Mainzer, the NEOWISE principal investigator at NASA's Jet Propulsion Laboratory, Pasadena, Calif. "I recognized the Helix nebula right away." 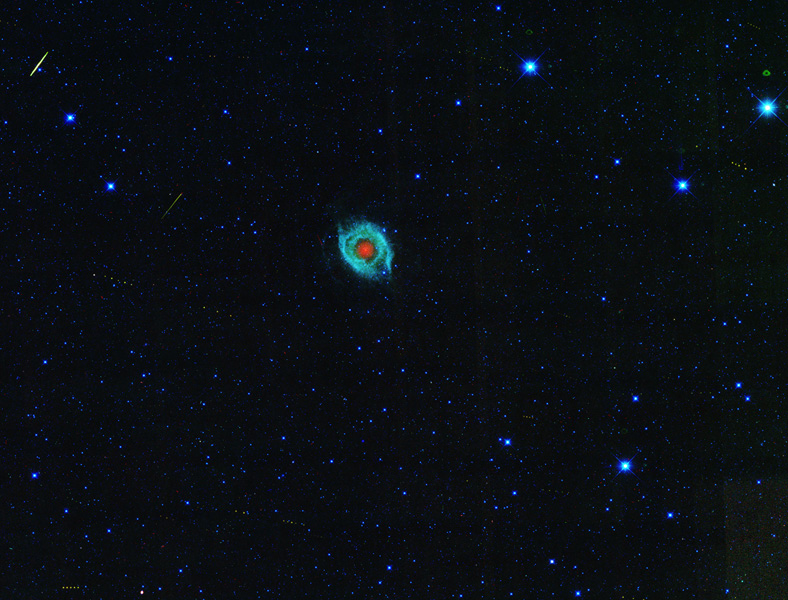 WISE launched into the morning skies above Vandenberg Air Force Base in central California on Dec. 14, 2009. By early 2011, it had finished scanning the entire sky twice in infrared light, snapping pictures of nearly one billion objects, including remote galaxies, stars and asteroids. Upon completing its main goals, WISE was put to sleep. Now, engineers are bringing the spacecraft out of slumber, as it cools back down to the chilly temperatures required for infrared observations. The spacecraft no longer has onboard coolant, but two of its infrared channels still work and can be used for asteroid hunting.

"WISE is the spacecraft that keeps on giving," said Ned Wright of UCLA, the principal investigator of WISE before it transitioned into NEOWISE.

In the Helix nebula image, infrared wavelengths of light have been assigned different colors, with longer wavelengths being red, and shorter, blue. The bluish-green and red materials are expelled remnants of what was once a star similar to our sun. As the star aged, it puffed up and its outer layers sloughed off. The burnt-out core of the star, called a white dwarf, is heating the expelled material, inducing it to glow with infrared light. Over time, the brilliant object, known as a planetary nebula, will fade away, leaving just the white dwarf.

Skirting around the edges of the Helix nebula are the footprints of asteroids marching across the field of view. Each set of yellow dots is a series of pictures of an asteroid. As the asteroid moved, WISE snapped several pictures, all of which are represented in this view. Scientists use these data to discover and characterize asteroids, including those that pass relatively close to Earth, called near-Earth asteroids. Infrared data are particularly useful for finding the smaller, darker asteroids that are more difficult to see with visible light, and for measuring the asteroids' sizes.

The other streaks in the picture are Earth-orbiting satellites and cosmic rays.

Featured image: A dying star, called the Helix nebula, is shown surrounded by the tracks of asteroids in an image captured by NASA's Wide-field Infrared Survey Explorer, or WISE. Image credit: NASA/JPL-Caltech/UCLA