A team of Brazilian astronomers led by Denilso Camargo of the Federal University of Rio Grande do Sul have made a remarkable discovery, a cluster of stars forming on the very edge of the Milky Way galaxy. This is the first time astronomers have found stars being born in such a remote location.

Our galaxy has a barred spiral shape, with arms of stars, gas and dust winding out from a central bar. Viewed from the side, it would appear relatively flat, witm most of the material in a disc and the central regions.

Stars form inside massive and dense clumps of gas in so-called giant molecular clouds (GMCs) that are mainly located in the inner part of the galactic disc. With many clumps in a single GMC, most (if not all) stars are born together in clusters.

Denilso’s team looked at data from NASA’s orbiting Wide-Field Infrared Survey Explorer (WISE) observatory. They not only found GMCs thousands of light years above and below the galactic disc, but that one of them unexpectedly contained two clusters of stars.

The new clusters, named Camargo 438 and 439, are within the molecular cloud HRK 81.4-77.8. This cloud is thought to be about 2 million years old and is around 16 000 light years beneath the galactic disk, an enormous distance away from the usual regions of star formation, in the direction of the constellation of Cetus. 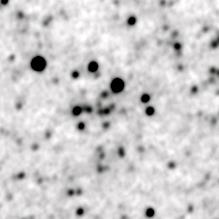 WISE W1 image of the newly found cluster Camargo 438. The cluster is about 16,000 light years away, so the image is about 24 light years across. The black dots in the image are individual stars. Credit: D. Camargo/NASA/WISE

Denilso believes there are two possible explanations. In the first case, the Chimney Model, violent events such as supernova explosions eject dust and gas out of the galactic disk. The material then falls back, in the process merging to form GMCs.

The other idea is that the interaction between our Galaxy and its satellites, the Magellanic Clouds, may have disturbed gas that falls into the Galaxy, again leading to the creation of GMCs and stars.

Denilso commented: “Our work shows that the space around the Galaxy is a lot less empty that we thought. The new clusters of stars are truly exotic. In a few million years, any inhabitants of planets around the stars will have a grand view of the outside of the Milky Way, something no human being will probably ever experience.

‘Now we want to understand how the ingredients for making stars made it to such a distant spot. We need more data and some serious work on computer models to try to answer this question.”

The Chimney Model would need several hundred massive stars to have exploded as supernovae over several generations, creating a ‘superwind’ that threw HRK 81.4-77.8 into its present position. Over millions of years, the bubbles created by the explosions may then themselves compress material, forming more stars and fuelling the ejection of material in a ‘galactic fountain’, where the dust and gas eventually rains back on to the disk.