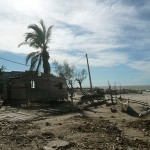 Victims of Cyclone Bingiza in Madagascar were 34 people, injured more than 200 thousand, informs ITAR-TASS. Tropical Cyclone Bingiza "raged for over a week in Madagascar. During this time, 77 thousand people lost their homes and more than 200 thousand were injured. Extensive damage caused to infrastructure and, above all, agriculture. Floods have destroyed crops of rice and a large number of livestock. Season of tropical cyclones in the southern Indian Ocean lasts from October to April. On average, there emerges about 15 vortices. The maximum number of cyclones (27) recorded in 1973. This season has brought so far only one cyclone, but strong! "Bingiza" has reached its maximum development, crossed the island on the diagonal and lasted more than 7 days. Tropical storm Hibbert caused death of 78 people last year.(GisMeteo Novosti)