A slow-slip event began under the Kāpiti-Horowhenua area, New Zealand in mid-September 2021, and is expected to continue for several more months.

The part of the subducting Pacific Plate 30 – 50 km (18 – 31 miles) beneath Kāpiti has started moving slowly again after 5 years of being ‘stuck’ to the overlying Australian Plate, GeoNet reports.1

The Hikurangi subduction zone – the boundary between the Australian and Pacific Plates – extends along the east coast and dives underneath New Zealand's North Island.

"We frequently have slow-slip events on the shallower part of the subduction zone off the east coast, but this time, it’s the deeper part under Kāpiti that is slowly slipping," said GNS Science Geophysicist Laura Wallace.

"This slow-slip event began in mid-September under the Kāpiti-Horowhenua area and is expected to continue for several more months, as has been the pattern in this region in the past.

"We have recorded about 6 cm (2.3 inches) of movement on the plate boundary so far," Wallace added. 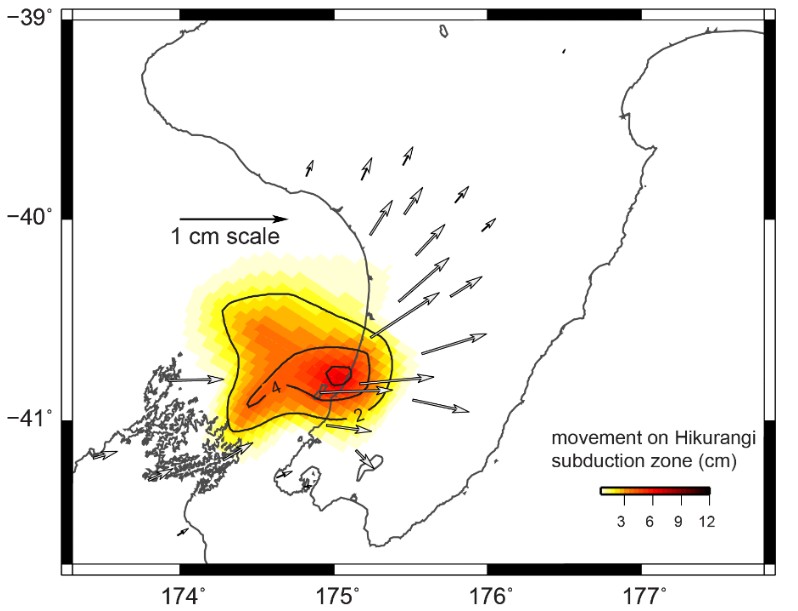 Model showing the amount of movement on the Hikurangi subduction zone since mid-September this year, in centimeters. The arrows show displacement of GeoNet continuous GPS sites used to detect the slow-motion earthquake. Image credit: GNS/Geonet

The country sees shorter events more frequently offshore the east coast, but these Kāpiti events typically only happen every five years or so and tend to last about a year. The last time a slow-slip event occurred in this area was after the 2016 Kaikōura earthquake.

"Slow-slip events can involve the same amount of movement on the plate boundary as a magnitude 7 earthquake, only they occur so slowly that no one would know. They can also produce some local felt earthquakes, although we haven’t observed any noticeable ones yet that we’d associate with this event," Wallace said.