Heavy rain associated with the front derived from the extratropical cyclone forming off the coast of southern Brazil this week caused severe floods in parts of southern Bahia, leaving 3 people dead.

The cyclone emerged from an area of ​​low pressure of 1 010 hPa off the coast of Rio de Janeiro earlier this week. As it moved south it began to deepen into the open sea and started to organize a spiral of clouds typical of cyclonic formation on Thursday, December 9, MetSul reports.1

Forecasters expect the cyclone to intensify further through Friday and move west toward the south of the country without approaching the coast.

The cyclone will change little in intensity over the coming weekend, with its minimum central pressure remaining around 995 hPa or 996 hPa, but it should accelerate its departure from the continent as it heads south and southeast to dissipate between two high-pressure centers in the South Atlantic earlier this week. 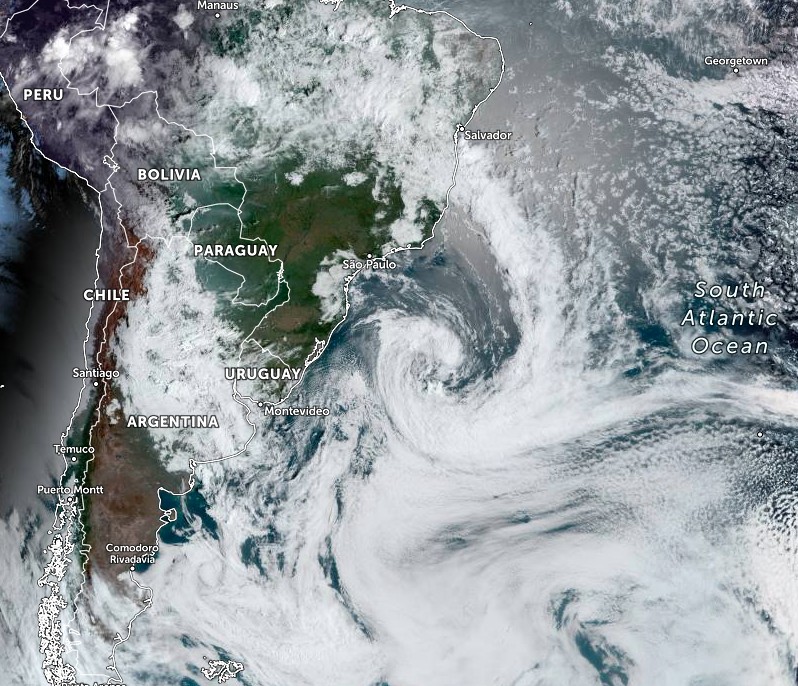 Because it is far from the coast, this extratropical cyclone does not pose risks in southern Brazil, MetSul meteorologists said.

"On the contrary, as it is common for this type of phenomenon to drive dry air to the west of its position, what it brings is sunshine and the predominance of steady weather. This storm at sea was also responsible for bringing cooler air from the maritime trajectory with frost in Rio Grande do Sul and Santa Catarina, as well as winter weather in the city of São Paulo."

A front link to the cyclone brought absurdly high amounts of rain to parts of southern Bahia over the past couple of days.

Rain gauge from the National Center for Disaster Prevention (Cemaden) recorded 450 mm (17.7 inches) of rain in the municipality of Itamaraju in Bahia and 171 mm (6.7 inches) in Porto Seguro.

Severe floods that followed in the municipal administrations of Itamaraju and Porto Seguro forced local authorities to declare a state of public calamity.

In Itamaraju, three people from the same family died and at least six houses collapsed in a landslide on December 8.