A streak of heavy snow and freezing rain is expected from Wyoming into Minnesota this week, severe thunderstorms and locally heavy rain in the Central Plains and the Upper Midwest, and heavy snow across the California mountains.

A low pressure system with a frontal boundary extending from the Southwest to the Upper Great Lakes is forecast to slowly propagate northeast over the next couple of days, NWS forecaster Zavadoff noted.

To the north and east of the primary low pressure center, cold temperatures and shortwave energy will work in tandem to generate moderate to heavy snow from the Northern Plains to the Upper Midwest.

While northeast Minnesota will likely receive the highest snowfall totals of 15 – 20 cm (6 to 8 inches), widespread accumulations of 5 to 10 cm (2 to 4 inches) are possible across the affected areas.

As such, Winter Storm Warnings and Advisories are in effect primarily in South Dakota and Minnesota until tomorrow morning. 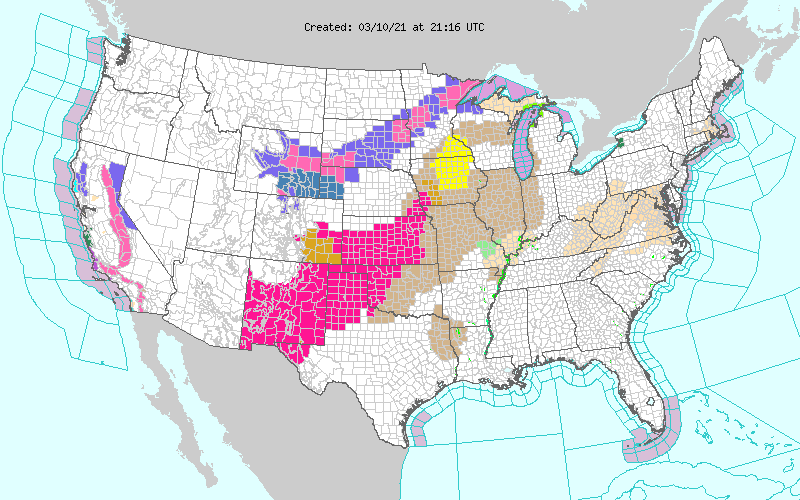 In Minnesota, Wisconsin, and the Michigan Upper Peninsula freezing rain is also likely to develop due to rain changing over to snow as temperatures drop through the evening hours.

Showers and thunderstorms will persist along the leading edge of the frontal boundary through Friday evening, March 12 and could become severe at times.

The Storm Prediction Center has issued a Slight Risk for severe thunderstorms for portions of the Central Plains and Mississippi Valley through tomorrow morning.

The primary region of concern tomorrow is an area extending from northeastern Oklahoma to southern Illinois, while northern Texas, central Oklahoma, southern Kansas, and southwestern Missouri will be at greatest risk on Friday.

These thunderstorms will also have the potential to cause flash and urban flooding due to their slow motion and high rain rates.

At present, a Marginal Risk for flooding has been issued for portions of Northern Wisconsin and the Michigan Upper Peninsula.

The risk for flash flooding will be carried throughout the period as the system is expected to move very slowly through the Middle Mississippi and Ohio Valleys tomorrow and subsequently stall over the Southern Plains on Friday.

Short wave energy associated with a low pressure center, positioned off the West Coast will provide the impetus for showers and thunderstorms along the coast and high elevation snow into tomorrow morning.

Further inland, a second low pressure center will drive the development of snow throughout the Central Great Basin as well as the central and southern Rockies.

The combination of these two low pressure centers into one system on Thursday afternoon will help prolong showers and thunderstorms in the Southwest and snow in the Intermountain West and central/southern Rockies into Friday. 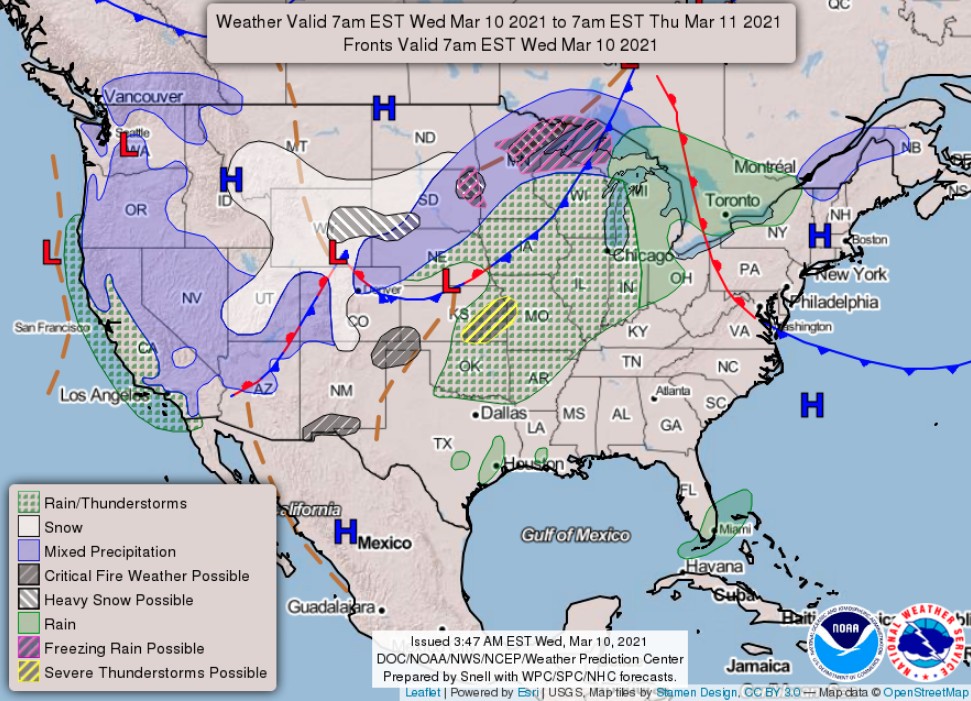 "There is increasing confidence that a major storm system will bring heavy snow to parts of the Central Rockies and central High Plains Friday through Sunday, March 12 to 14, 2021," NWS Weather Prediction Center said Wednesday, March 10, 2021.

This includes the I-25 urban corridor from Cheyenne, Wyoming to Colorado Springs, Colorado.

While it is too early to determine exact snowfall amounts, there is an increasing chance for more than 30 cm (12 inches) of snowfall across the Front Range of Colorado and Laramie Range, Wyoming, extending east into the High Plains of Colorado, Wyoming, and Nebraska Panhandle. Locally, much higher amounts are possible, WPC said.

Strong winds gusting above 48 km/h (30 mph) are likely, which will combine with snowfall rates in excess of 2.5 cm (1 inch) per hour to produce difficult road and air travel.

The snow is likely to be heavy and wet, leading to the potential for scattered power outages and tree damage.