Researchers at the University of Massachusetts Amherst and the University of Copenhagen's Center for Ice and Climate ​are proposing a new hypothesis for how Greenland's "Grand Canyon" formed: a series of catastrophic floods abruptly drained huge meltwater-filled lakes repeatedly. The findings also suggest that Greenland's subglacial canyon network has impacted the island's ice sheet since its formation.​

Although periodic outbursts have been proposed as the mechanism by which the Columbia River and other North America canyon networks formed, they had not been considered initially as having played a role in forming the landscape concealed beneath the Greenland ice sheet, according to lead author Benjamin Keisling.

"If the floods we propose occurred, they could have influenced ocean circulation, causing abrupt climate changes with regional and perhaps global significance," he stated. "The megacanyon beneath northern Greenland also influences how ice and water flow in the subglacial environment today, which affects present-day ice-sheet stability."

Keisling recalled that in most studies, scientists would use the modern ice sheet as a starting point, but he and his colleagues took a different approach by finding out what Greenland looked like before the widespread glaciation. "We wanted to better understand the dynamics of 'glacial inception'– how, where, and why the ice sheet first grew on an ice-free island."

The team also wanted to further understand how the ice sheet grew back after melting. "We know from prior work this has happened multiple times in the past and could again in the future, given enough global warming." 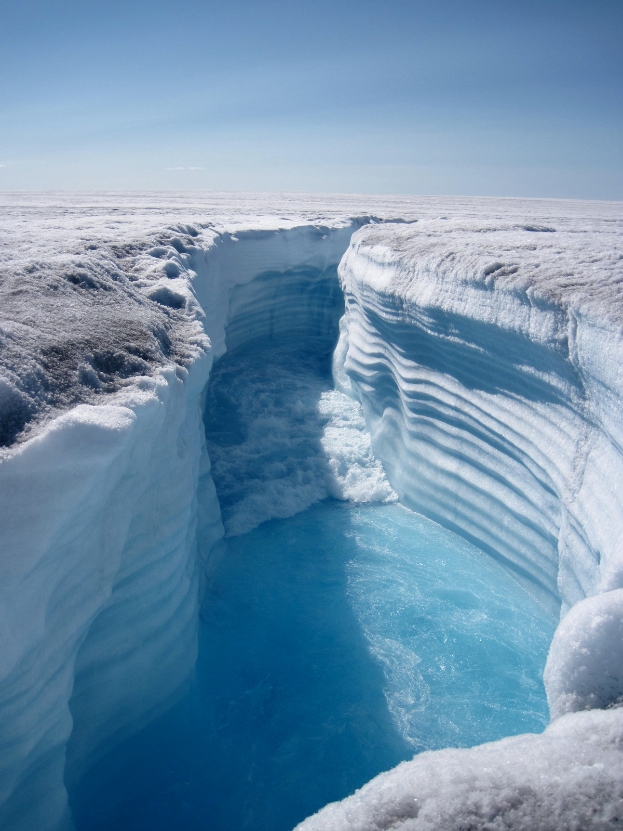 To simulate Greenland's ice sheet's evolution over many glacial-interglacial cycles in the past million years, the team used coupled ice-sheet and climate models. They discovered that following long periods with stable temperatures, a remarkable warm period could cause the ice sheet to quickly pull back, leading to large lakes of melted ice in areas where the bedrock was still sunken from the weight of the old ice sheet.

The findings show the ice dams give way, resulting in large outburst floods over time. "It appears that the filling and draining of these lakes as the ice repeatedly retreated and advanced carved Greenland's megacanyons," said Keisling, adding that similar floods have been recorded at the edge of other retreating ice sheets.

Comparing Greenland with modern outbursts, the researchers estimate that hundreds of floods carved its Grand Canyon. Results indicate testable hypotheses for future research that could solve the long-standing debate about whether the ice sheet's stability has evolved over time.

"This helps paint a picture of what happened during past warm periods when the melting ice sheet caused global sea levels to rise– a phenomenon we are also seeing today."

The Greenland ice sheet (GrIS) covers a complex network of canyons thought to be preglacial and fluvial in origin, implying that these features have influenced the ice sheet since its inception. The largest of these canyons terminates in northwest Greenland at the outlet of the Petermann Glacier. Yet, the genesis of this canyon, and similar features in northern Greenland, remains unknown. Here, we present numerical model simulations of early GrIS history and show that interactions among climate, the growing ice sheet, and preexisting topography may have contributed to the excavation of the canyon via repeated catastrophic outburst floods. Our results have implications for interpreting sedimentary and geomorphic features beneath the GrIS and around its marine margins, and they document a novel mechanism for landscape erosion in Greenland.