A new study shows that natural hazards on Earth, specifically earthquakes and tsunamis, can create much more disturbances in the ionosphere than previously assumed. The researchers studied the catastrophic 2011 M9.0 Tohoku earthquake and tsunami in Japan, and found that the ionosphere over the country was significantly affected.

Lead author Min Yang Chou of the University Corporation for Atmospheric Research (UCAR) said the Tohoku event not only triggered a devastating tsunami but also sent unprecedented ripples at the space-atmosphere interaction region.

"Although the earthquake was a transient local event, the tsunami ocean waves backscattered by seafloor topography in the Pacific Ocean continuously excited gravity waves and planar traveling ionospheric disturbances (TIDs) propagating toward Japan for more than 10 hr," the authors said.

Unusual ionospheric band structures referred to the midlatitude nighttime medium‐scale TIDs (MSTIDs) and plasma irregularities developed following the planar TIDs over Japan. It is common to observe the nighttime MSTIDs traveling along the Japan island during the summer; however, they are rarely seen in March, they said.

"What drove the appearance of MSTIDs and ionospheric irregularities in March was likely the reflected tsunami wave‐induced gravity waves. Such space weather phenomena have an adverse impact on Global Navigation Satellite System navigation and applications."

The researchers used 30‐s sampling GNSS observational data in Receiver Independent Exchange format from the GPS Earth Observation Network in Japan. The GPS Earth Observation Network is a compact system of ground‐based GNSS receivers that primarily operated for precise point positioning for navigation, surveying, and related activities. It is the largest GNSS network of the world, consisting of 1 200 GNSS permanent stations, providing an opportunity to study ionospheric TEC perturbations with very high spatial and temporal resolution. 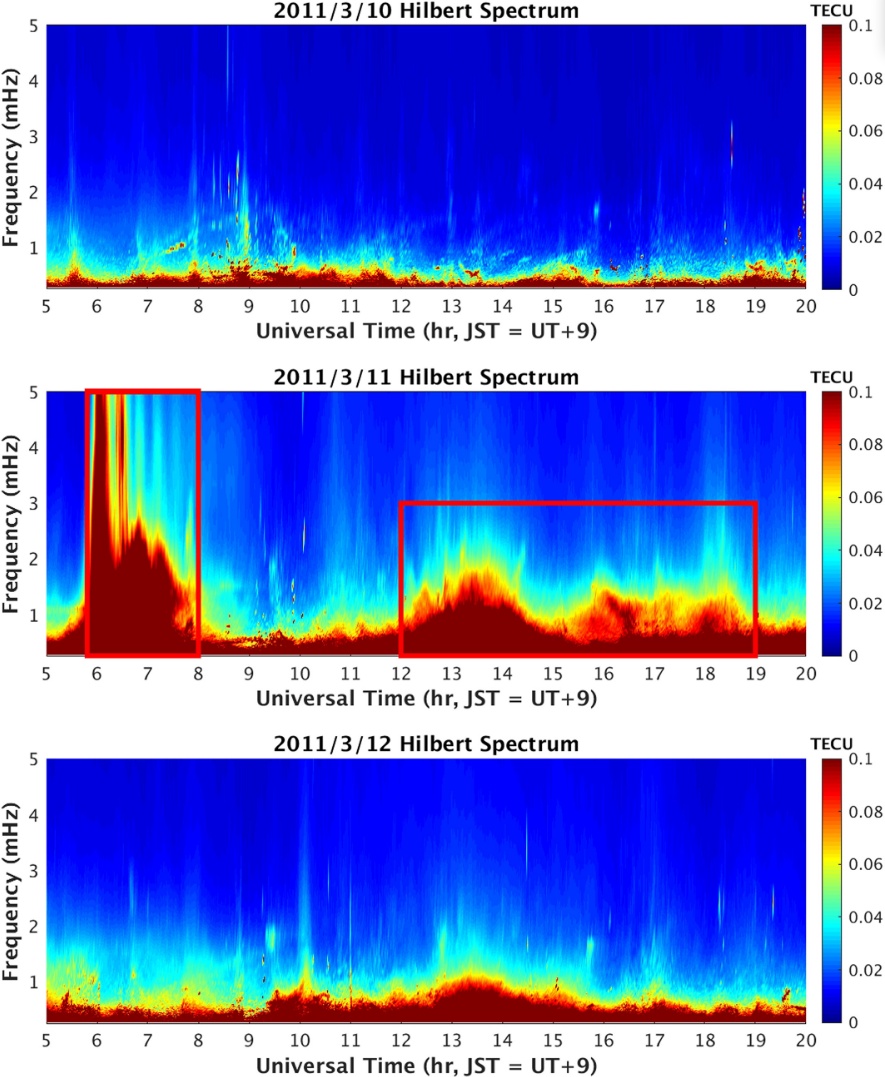 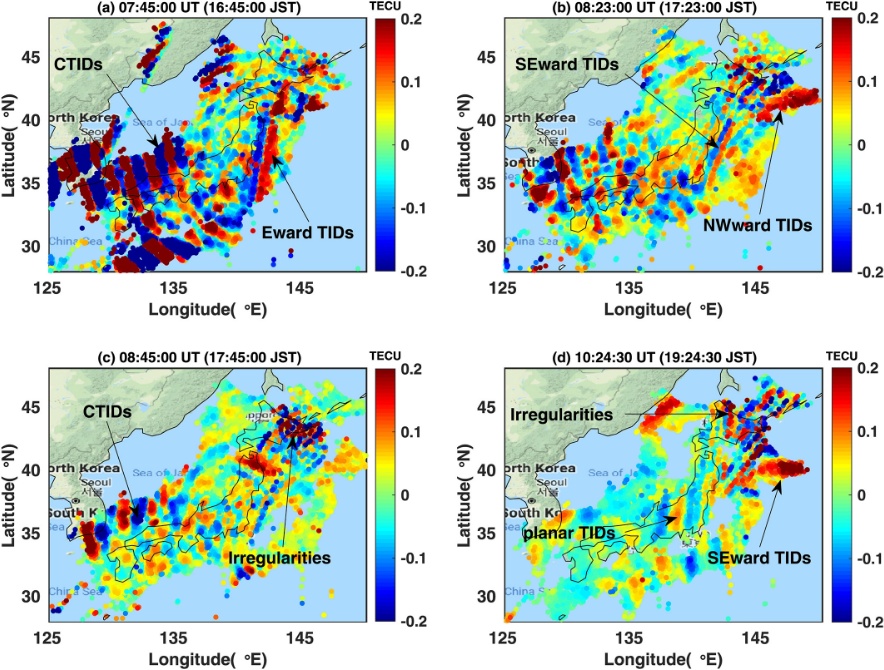 To understand the origins of the planar TIDs, the researchers compared them with the Method Of Splitting Tsunami model simulations. The next figure shows the tsunami propagation and evolution from Movie S1 of Tang et al. (2012). 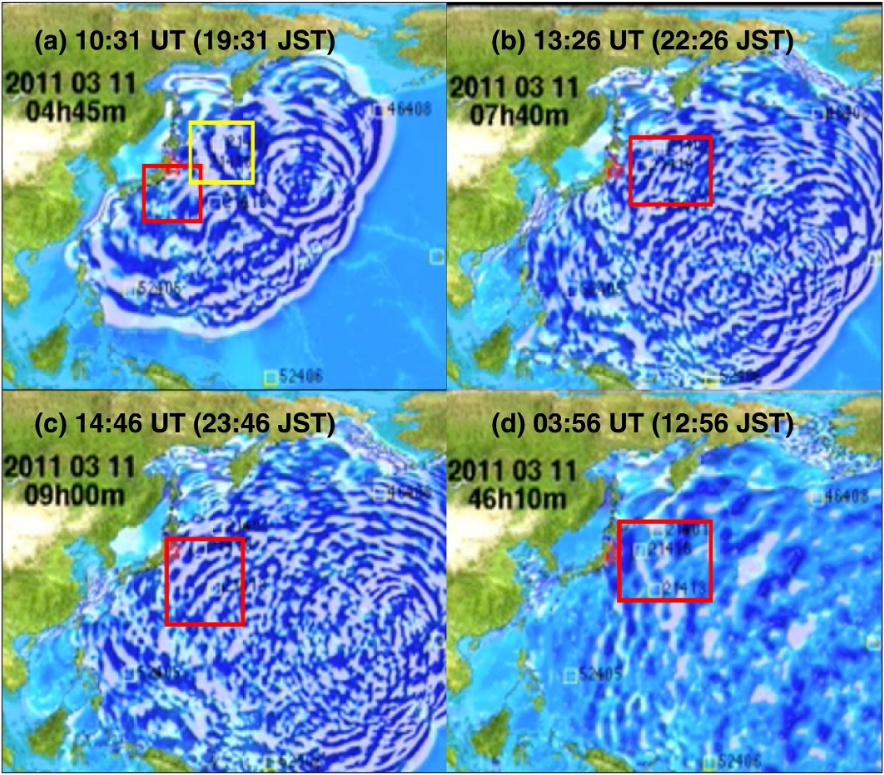 Overall, the planar TIDs reflect the wavefront orientation of the reflected tsunami waves at different times, suggesting that their source is the tsunami. It is noteworthy that the time latency between the tsunami and planar TIDs maps is approximately 1–2 hr, which is reasonable time delay since the tsunami‐induced gravity waves may reach the ionosphere ~1–2 hr after excitation at the surface.

This study reports that the ionospheric responses to the Tohoku tsunami and its subsequent disturbances last for many hours, and the induced gravity waves can significantly impact the ionosphere and thermosphere system. The extended effects have important implications for space weather applications and should be taken into consideration for future space weather forecasts.

Gravity waves are a potential source to generate ionospheric irregularities such as Es layer instability and equatorial and midlatitude spread F, which can cause amplitude scintillations and phase fluctuations in transionospheric radio signals, leading to degradation in GNSS performances.

Significant scintillations typically occur in the equatorial and auroral regions, as the intense ionospheric disturbances are usually limited to low and high latitudes. At midlatitudes, localized ionospheric scintillations occur most frequently during summer nighttime and solar minimum years, in association with the well‐known midlatitude spread F.

Yoon and Lee (2014) investigated the potential impact of midlatitude nighttime MSTIDs and irregularities on GPS‐based navigation systems. They found loss of lock of GPS signals frequently occurred during the MSTID events, especially when the ionospheric spatial gradient is significant, leading to potential threats to users of ground‐ and space‐based augmentation systems.

These studies demonstrate that the observed nighttime MSTIDs and small‐scale ionospheric irregularities can be a source of midlatitude ionospheric scintillations. They can also cause large ionospheric spatial gradients, leading to errors in GNSS radio occultation retrievals, which in turn result in errors in space weather forecasts.

The study found that the impacts of TIDs and plasma irregularities have a nonnegligible effect on GNSS navigation and applications.

Furthermore, the ground‐based GNSS networks have proved to be a useful tool for the tsunami early warning system

It was previously thought that only solar flares could cause disturbances to the ionosphere to a great extent. Solar flares send waves of ionization rippling through the ionosphere, and it turns out that earthquakes and tsunamis generate the same effect, said Dr. Tony Phillips of the SpaceWeather.com.

The disturbances over Japan was even, in fact, similar to X-class solar flares, Chou added. Tsunamis are even worse in some ways as the disturbances they create go on for days and can be very complicated because of reflections. Reflected waves near Japan caused nighttime twinkling of GPS satellite signals in 2011, which was enough to cause some devices to entirely lose lock.

At the present time, the Sun is undergoing one of the deepest Solar Minima of the past century, meaning there are no solar flares. In the absence of solar flares, earthquakes and tsunamis will be mimicking stormy space weather. "Understanding how natural hazards impact our upper atmosphere and cause variations in the space environment around Earth is crucial," said Chou.

In this study, we report the persistent impacts of the 2011 Tohoku earthquake/tsunami on the ionosphere using the ground‐based Global Navigation Satellite System and FORMOSAT‐3/COSMIC total electron content. Multiple unusual ionospheric phenomena, such as ionospheric irregularities, nighttime medium‐scale traveling ionospheric disturbances (MSTIDs), and planar traveling ionospheric disturbances (TIDs), were observed after the emergence of tsunami‐induced concentric gravity waves. The ionospheric irregularities initially developed over the Hokkaido region following the interference of gravity waves at ~8:45 UT. Remarkably, the Perkins‐type nighttime MSTIDs accompanying the planar TIDs were discernible over Japan following the irregularities. By comparing with the tsunami model simulation and ocean buoy observations, it is determined that these planar TIDs, lasting for about 10 hr, were likely related to tsunami ocean waves reflected by seamounts, ridges, islands, and seafloor topography in the Pacific Ocean. Due to the absence of sporadic E layers, we suggest that the coupling between the tsunami‐generated gravity waves and the Perkins instability plays an essential role in initiating the equinoctial nighttime MSTIDs. The long‐lasting tsunami can continuously impact the ionosphere, affecting the nighttime ionospheric electrodynamics and making the conditions conducive for the development of midlatitude nighttime ionospheric irregularities and instabilities.