Researchers reporting in Nature Astronomy revealed first detailed images of asteroid 2 Pallas, including its heavily cratered surface. Pallas has a diameter of about 513 km (318 miles), which is roughly 15 percent of the moon's diameter. It is the third-largest object in the asteroid belt after Ceres and Vesta.

Researchers believe that the asteroid's severely cratered surface is a result of its unusually tilted orbit, which makes it collide through the asteroid belt at an angle, unlike most other similar space objects.

They were able to acquire 11 series of images, observing the asteroid from various angles as it rotated. After compiling the images, researchers produced a 3D reconstruction of its shape.

From there, 36 craters were identified, which seem to cover at least 10 percent of the asteroid's surface. The craters ranged from about 30 to 120 km (19 to 75 miles) wide.

The massive craters on the asteroid– one near the south pole and the other near the equator– indicated that the object once received huge sideways impacts, with projectiles around 60 to 90 km (37 to 65 miles).

Furthermore, the researchers said the impact that resulted in the crater near the equator may have created the family of other hundred small asteroids around Pallas, which are less than 20 km (12 miles) wide.

Computer simulations of past collisions in the asteroid belt hinted that the space objects hitting Pallas were also moving at unusually fast speeds, with the average about 41 400 km/h (25 725 mph).

The high speeds were possibly caused by the way Pallas travels in a strangely tilted orbit– since abrupt impacts have more chance to create craters than slower ones, the asteroid's unusual orbit helped explain why it was cratered.

"Pallas is heavily cratered," said paper co-author Miroslav Broz, an astronomer at the Charles University. "Its surface might resemble a golf ball."

"From these images, we can now say that Pallas is the most cratered object that we know of in the asteroid belt. It's like discovering a new world," Marsset added, noting its "violent collisional history."

To see how violent that history likely has been, the team ran a series of simulations of Pallas and its interactions with the rest of the asteroid belt over the last 4 billion years and they did the same with Ceres and Vesta, taking into account each asteroid’s size, mass, and orbital properties, as well as the speed and size distributions of objects within the asteroid belt. They recorded each time a simulated collision produced a crater, on either Pallas, Ceres, or Vesta, that was at least 40 kilometers wide (the size of most of the craters that they observed on Pallas).

They found that a 40 km (24.8 miles) wide crater on Pallas could be made by a collision with a much smaller object compared to the same size crater on either Ceres or Vesta. Because small asteroids are much more numerous in the asteroid belt than larger ones, this implies that Pallas has a higher likelihood of experiencing high-velocity cratering events than the other two asteroids.

"Pallas experiences two to three times more collisions than Ceres or Vesta, and its tilted orbit is a straightforward explanation for the very weird surface that we don’t see on either of the other two asteroids," Marsset says.

As for the bright spot discovered in Pallas’ southern hemisphere, the researchers are still unclear as to what it might be. Their leading theory is that the region could be a very large salt deposit. From their three-dimensional reconstruction of the asteroid, the researchers estimated Pallas’ volume, and, combined with its known mass, they calculate that its density is different from either Ceres or Vesta, and that it likely originally formed from a mixture of water ice, and silicates.

Over time, as the ice in the asteroid’s interior melted, it likely hydrated the silicates, forming salt deposits that could have been exposed following an impact.

One supporting piece of evidence for this hypothesis may come from closer to Earth as each December, stargazers can view a dazzling display known as the Geminids — a shower of meteors that are fragments of the asteroid Phaethon, which itself is thought to be an escaped fragment of Pallas that eventually made its way into Earth’s orbit.

Astronomers have long noted a range of sodium content in the Geminid showers, which Marsset and his colleagues now posit may have originated from salt deposits within Pallas.

"I don’t know if they would happen, but they could tell us more about the surface of Pallas and the origin of the bright spot." 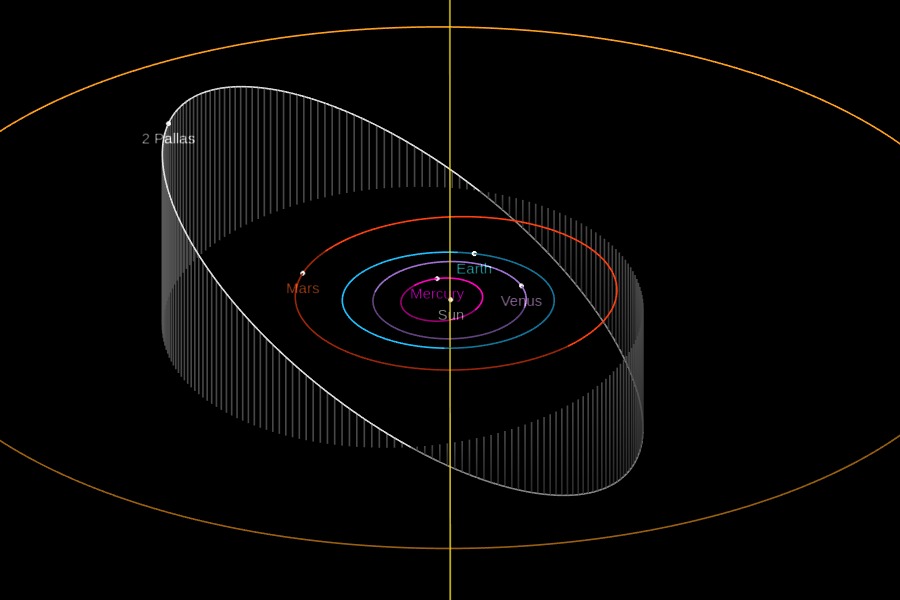 Asteroid (2) Pallas is the largest main-belt object not yet visited by a spacecraft, making its surface geology largely unknown and limiting our understanding of its origin and collisional evolution. Previous ground-based observational campaigns returned different estimates of its bulk density that are inconsistent with one another, one measurement1 being compatible within error bars with the icy Ceres (2.16 ± 0.01 g cm−3)2 and the other3 compatible within error bars with the rocky Vesta (3.46 ± 0.03 g cm−3)4. Here we report high-angular-resolution observations of Pallas performed with the extreme adaptive optics-fed SPHERE imager5 on the Very Large Telescope. Pallas records a violent collisional history, with numerous craters larger than 30 km in diameter populating its surface and two large impact basins that could be related to a family-forming impact. Monte Carlo simulations of the collisional evolution of the main belt correlate this cratering record to the high average impact velocity of ~11.5 km s−1 on Pallas—compared with an average of ~5.8 km s−1 for the asteroid belt—induced by Pallas’s high orbital inclination (i = 34.8°) and orbital eccentricity (e = 0.23). Compositionally, Pallas’s derived bulk density of 2.89 ± 0.08 g cm−3 (1σ uncertainty) is fully compatible with a CM chondrite-like body, as suggested by its spectral reflectance in the 3 μm wavelength region6. A bright spot observed on its surface may indicate an enrichment in salts during an early phase of aqueous alteration, compatible with Pallas’s relatively high albedo of 12–17% (refs. 7,8), although alternative origins are conceivable.