Astronomers have observed a unique and baffling object in asteroid belt with six comet like tails of dust radiating from it. While this object is on an asteroid-like orbit, it looks like a comet, and is sending out tails of dust into space.

Unlike all other known asteroids, which appear simply as tiny points of light, this asteroid, designated P/2013 P5, resembles a rotating lawn sprinkler and astronomers are trying to explain its mysterious appearance. 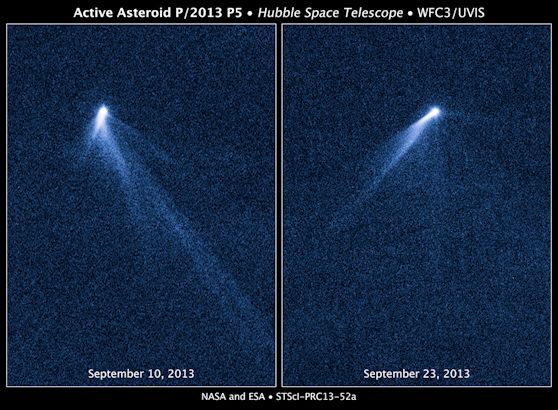 This Hubble Space Telescope's set of images reveals a never-before-seen set of six comet-like tails radiating from a body in the asteroid belt, designated P/2013 P5.

"We were literally dumbfounded when we saw it," said lead investigator David Jewitt of the University of California at Los Angeles. "Even more amazing, its tail structures change dramatically in just 13 days as it belches out dust. That also caught us by surprise. It's hard to believe we’re looking at an asteroid."

Jewitt leads a team whose research paper appeared online in the November 7 issue of the Astrophysical Journal Letters. 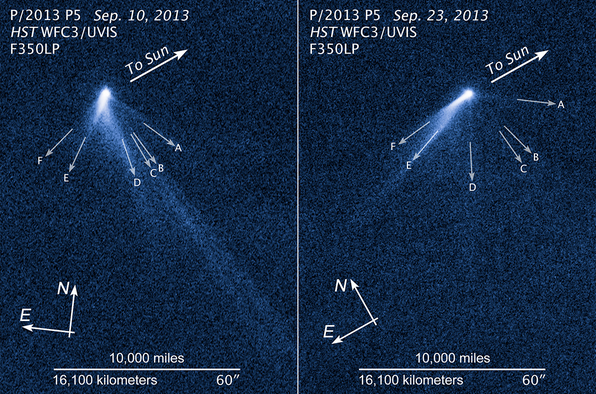 Careful modeling by team member Jessica Agarwal of the Max Planck Institute for Solar System Research in Lindau, Germany, showed that the tails could have been formed by a series of impulsive dust-ejection events. She calculated that dust-ejection events occurred April 15, July 18, July 24, August 8, August 26 and September 4.  Radiation pressure from the Sun stretched the dust into streamers.

Radiation pressure could have spun P/2013 P5 up. Jewitt said the spin rate could have increased enough that the asteroid's weak gravity no longer could hold it together. If that happened, dust could slide toward the asteroid's equator, shatter and fall off, and drift into space to make a tail. So far, only about 100 to 1,000 tons of dust, a small fraction of the P/2013 P5's main mass, has been lost. The asteroid's nucleus, which measures 1,400 feet wide, is thousands of times more massive than the observed amount of ejected dust.

Astronomers will continue observing P/2013 P5 to see whether the dust leaves the asteroid in the equatorial plane. If it does, this would be strong evidence for a rotational breakup. Astronomers will also try to measure the asteroid's true spin rate.

Jewitt's interpretation implies that rotational breakup must be a common phenomenon in the asteroid belt; it may even be the main way small asteroids die.

"In astronomy, where you find one, you eventually find a whole bunch more," Jewitt said. "This is just an amazing object to us, and almost certainly the first of many more to come."

Jewitt said it appears P/2013 P5 is a fragment of a larger asteroid that broke apart in a collision roughly 200 million years ago. There are many collision fragments in orbits similar to P/2013 P5's. Meteorites from these bodies show evidence of having been heated to as much as 1,500 degrees Fahrenheit. This means the asteroid likely is composed of metamorphic rocks and does not hold any ice as a comet does.

Featured image: Artist's schematic. This is a diagram of the structure seen around an active asteroid designated P/2013 P5. The Hubble Space Telescope photographed six finger-like dust tails in September 2013. One interpretation is that the asteroid's rotation rate has been increased to the point where dust is falling off the surface along the equator and escaping into space. The pressure of sunlight then sweeps the dust into long tails. Credit: NASA, ESA, and A. Feild (STScI)