A strong tornado hit the city of Nashville, Tennessee on March 3, 2020, causing extensive damage. The twister has left at least 24 people dead and at least 40 buildings destroyed.

Tennessee Gov. Bill Lee declared a state of emergency. "The State of Tennessee has activated a strong coordinated response effort to last night’s devastating storms," Lee said. "In the hours ahead, we will continue deploying search and rescue teams, opening shelters across the state, and sending emergency personnel to our communities hit hardest."

"We have potentially a long-track tornado that began several miles west of Nashville, continued through Nashville and then areas east of Nashville. The city of Cookeville has been hard-hit as well," NWS Nashville said.

"We have sent out storm survey teams to begin assessing the tornado damage. There is a lot to survey. We won't know any EF-ratings until later on, once they've had the opportunity to see the damage first-hand." 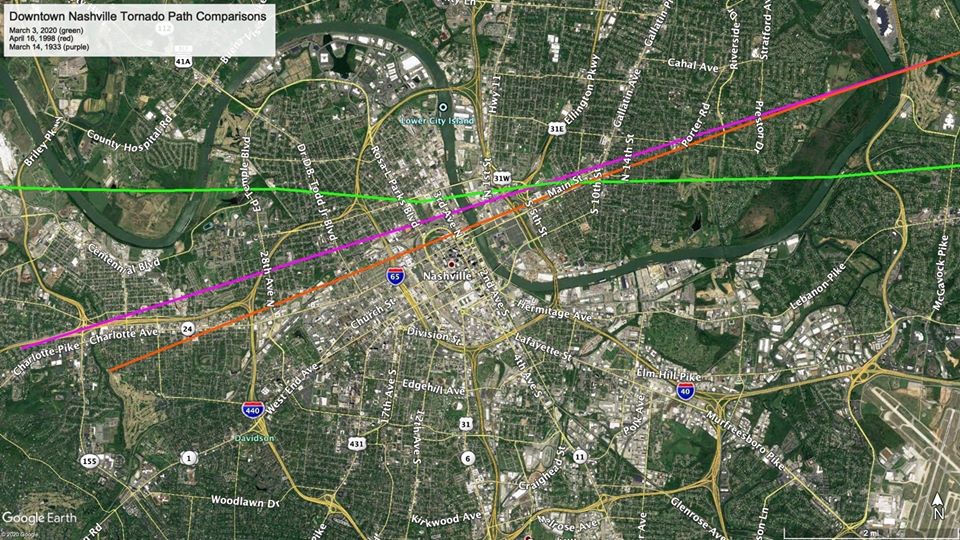 The National Weather Service (NWS) confirmed the tornado northwest of Downtown Nashville around 06:39 UTC (00:39 LT), adding that the twister was on the ground for roughly 45 minutes, moving east about 72 km/h (45 mph) before moving through several counties in Tennessee.

"This is an extremely dangerous tornado," NWS wrote. Nashville's Germantown neighborhood reportedly suffered some of the worst damage, where a gas leak forced an evacuation of the IMT building.

The Nashville Fire Department (NFD) said officers and personnel are on the scene, responding to reports of about 40 structure collapses. Moreover, the Metro Nashville Police Department (MNPD) said there was major destruction in the Central downtown and East Precincts.

Unbelievable. Tornado touched down in the Germantown neighborhood in Nashville about an hour ago. Completely ripped through the neighborhood. pic.twitter.com/JCgQGaoeyu

Sadly, the tornado damage in Nashville is only going to become profound as the sun comes up. pic.twitter.com/lmZbDqwjzR

This was the view from 5th & Main St in East Nashville as the tornado destroyed power lines and kicked up debris.

Here’s a view of Nashville, TN as the tornado sirens blared through the city tonight. Thoughts are with those who are being impacted! #tnwx #nashville : Snapchat pic.twitter.com/xqSssJLIbo

"There are multiple homes damaged and multiple injuries. We have requested mutual aid from allied agencies. We continue to search for injured," said Mt. Juliet Police in a tweet.

Jefferson Street and Rosa Parks Boulevard were closed as roads were covered with debris and fallen posts. Homes and buildings were in shambles, with roofs ripped off, walls torn in pieces, and scraps scattered on streets.

Before and after: Burger Up, Basement East, Family Dollar, and Molly Green  #nashvilletornado #NashvilleTN pic.twitter.com/IysVbpMDoM

NOT my pictures but this is my city. Prayers and love needed for #nashvilletornado pic.twitter.com/ZslhJy8NMP

Some scenes from Main Street in East Nashville tonight.

Aftermath of tornado in Nashville pic.twitter.com/nheWy8wUXI