The Indian Ocean Dipole (IOD) remains strongly positive, with the latest weekly index value to October 27 +2.06 °C. This is the second-highest weekly value observed in the Bureau's dataset, behind +2.15 °C observed two weeks ago. The Bureau's dataset extends from 2001 to present. Before the current event, the previous highest value was +1.48 °C for the week ending November 5,  2006. Monthly values from a different dataset suggest the current event is the strongest positive IOD since 1997. 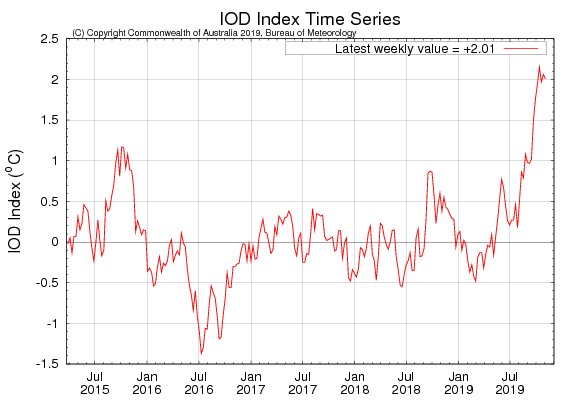 The very strong positive values of the IOD are due to the strong temperature gradient across the Indian Ocean. Sea Surface Temperatures (SST) to the south of the Indonesian islands of Sumatra remain more than 2 degrees cooler than average for the week ending October 27, while warm anomalies close to the Horn of Africa reach between 1 and 2 degrees warmer than average. 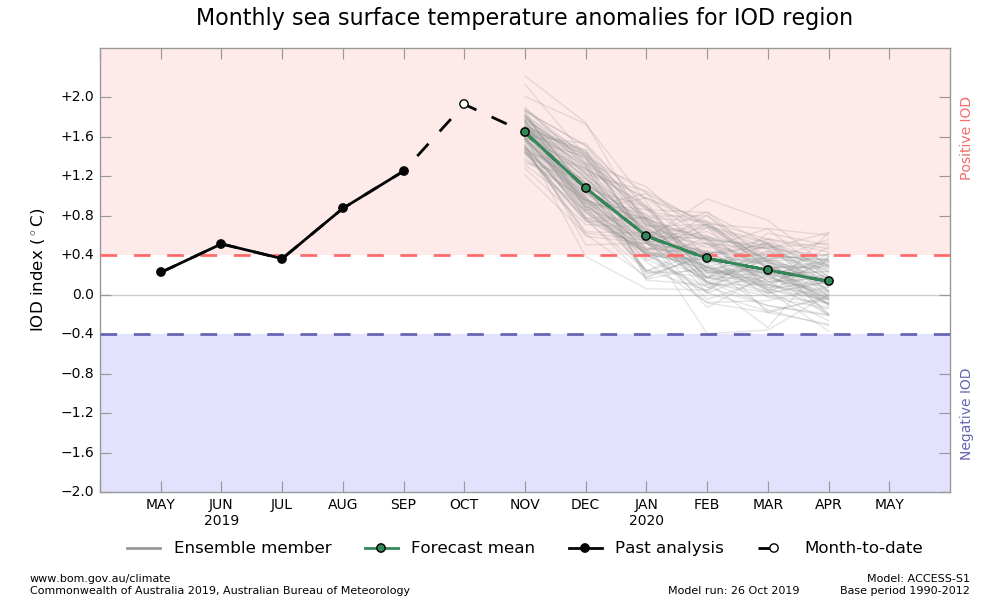 The overall pattern of sea surface temperatures has remained generally consistent with a positive IOD pattern since late May.

All six international climate models surveyed by the Bureau indicate the IOD will remain positive into December.

The retreat of the Southwest Indian Monsoon was very slow this year, and models are indicating a slower break down of the IOD than usual. However, it remains unlikely that the positive IOD will persist into the second half of summer. IOD events dissipate as the monsoon trough moves into the southern hemisphere, which changes the broadscale wind patterns over the IOD region and returns sea surface temperatures to near average.

By January four of six models are close to or well below the threshold value, indicating this return to neutral.

A positive IOD often results in below-average winter-spring rainfall over southern and central Australia and above-average rainfall across Eastern Africa. It also typically means warmer than average winter–spring days for the southern two-thirds of Australia.