Hundreds of thousands in East Africa are now being affected by torrential rains influenced by the very strong positive Indian Ocean Dipole (IOD), which was predicted to cause extreme rainfall in the region from October to December. The current positive IOD event has strengthened significantly over the past month. The latest weekly value of +2.15 °C is the strongest positive weekly value since at least 2001 (when the BOM's weekly dataset commenced), and possibly since 1997, when strong monthly values were recorded.

IOD, also called Indian Niño, is the irregular swinging movement of the temperature on the surface of the seas, in which the western Indian Ocean becomes warmer and then colder as compared to the eastern part.

According to Dr. Saji Hameed, one of the scientists who discovered IOD and studied the phenomenon at the University of Aizu in Japan, the 2019 IOD event is going to be one of the strongest ever recorded.

In October, the western Indian Ocean has been warmer than the eastern, and as a result, higher evaporation off the African coastline is being dumped inland as rainfall.

Hameed added that equatorial East Africa is very likely to be unusually wet from October to December, and "November is the most dangerous month as far as IOD impacts are concerned, as enhanced rains reach far into highlands and the watersheds of several rivers."

Intergovernmental Authority on Development Climate Prediction and Applications Center (ICPAC) in Kenya has confirmed the pattern.

Moreover, rainfall in early October has already been wetter than average, according to the monitoring by Greater Horn of Africa Climate Outlook Forum.

Hameed said people can get a glimpse of what to expect this year from the 2006 East Africa weather conditions. During that year, the region experienced heavy rains, floods, and also widespread health issues. The wet conditions impacted the outbreak of Rift Valley Fever, which affected not only humans but also animals. By March 20017, it caused 155 Kenyans to perish. Meanwhile, in Somalia, 450 000 locals were displaced by the 2006 floods.

On October 21, 2019, the UN reported that around 600 000 to 800 000 people are affected by seasonal flooding in South Sudan, which was heavier than usual. Furthermore,  unprecedented floods around the Maban town have affected 200 000 people.

According to a report from the Food and Agriculture Organization, local rainfall and increased river flow in Somalia from Ethiopia makes flooding in October very likely in a lot of southern areas in the former.

"We are seeing localized flooding and that is likely to increase," said Justin Brady, head of UN's emergency aid coordination in Somalia.

From 2016 to 2017, a negative IOD or the reverse effect was linked to drought in Somalia and southern Ethiopia. "A lot is made of El Niño, but the dipole is what has the most impact in Somalia," Brady said.

In Kenya, the Red Cross Society is preparing supplies as a response for about 30 000 people affected.

"It is a serious event [and it] may get much worse," Red Cross climate advisor Maurine Ambani said. "Everyone needs to be alert, so getting out the message is important."

The Meteorological Department in Kenya has provided a forecast in September for the Kenya Red Cross, saying there was a strong chance of rains higher than average in most parts of the country. Ambani also said that the Red Cross is also looking for funding as a preparation for possible scenarios. The agency has also called for early humanitarian action following the forecasts. 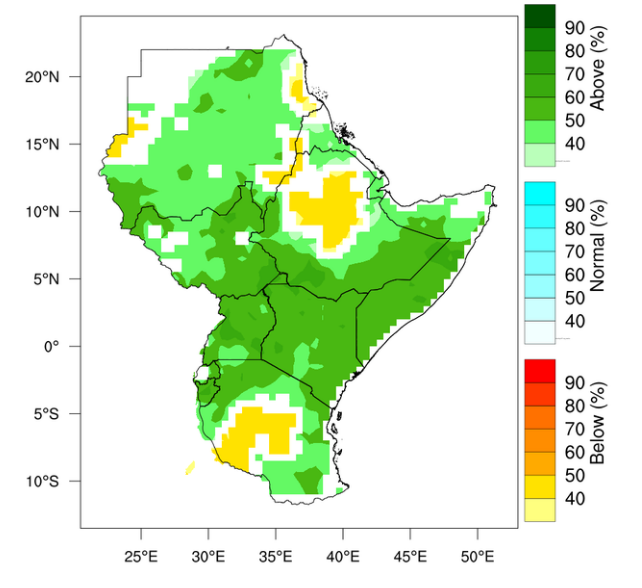 "The current positive IOD event has strengthened significantly over the past month," it continued.

"The latest weekly value of +2.15 °C is the strongest positive weekly value since at least 2001 (when the Bureau's weekly dataset commenced), and possibly since 1997, when strong monthly values were recorded. Over the past month, strong easterly trade winds across the tropical Indian Ocean aided upwelling of cooler water in the eastern Indian Ocean. At the same time, very warm waters off the Horn of Africa have caused an even greater temperature gradient across the basin.

"Given the strength of the trade winds, the IOD may strengthen further over the next fortnight. However, international climate models surveyed by the Bureau indicate the positive IOD is unlikely to persist far into summer. IOD breakdown occurs when the monsoon trough moves into the southern hemisphere in early December. With the monsoon trough having a record-late retreat from India this year, the shift into the southern hemisphere may also be later than usual.

"Typically, a positive IOD brings below-average winter–spring rainfall to southern and central Australia, with warmer days for the southern two-thirds of the country. Positive IOD events are often associated with a more severe fire season for southeast Australia."

The positive #IndianOceanDipole (IOD) has strengthened, continuing its influence on the climate of Australia and other parts of the globe.

The positive IOD is likely to persist at least until the end of spring. Read more in our #ENSO Wrap-Up: https://t.co/IA181DzgEC pic.twitter.com/vPc5YTcvfN