Hurricane "Dorian" made landfall over the Cape Hatteras, North Carolina at 12:35 UTC (08:35 EDT) on September 6, 2019. With 3 over the Bahamas, this is its fourth landfall but not final as it continues moving toward Nova Scotia, Canada where it is expected to make landfall as a Category 1 hurricane late September 7 or early September 8.

At least 4 people lost their lives in the USA and at least 30 in the Bahamas. However, the death toll in the Bahamas is expected to keep rising and some reports mention Dorian could already be one of the deadliest hurricanes on record.

Surface and radar data indicate that the center of Hurricane Dorian made landfall at 12:35 UTC over Cape Hatteras, North Carolina with maximum sustained winds were near 150 km/h (90 mph), making it a Category 1 hurricane on the Saffir-Simpson Hurricane Wind Scale.

Other stations at Hatteras High School and Buxton both recently reported a minimum central pressure of 957 hPa.

It was moving NE at 28 km/h (17 mph) and this general motion is expected through Saturday night, September 7.

The center should move to the southeast of extreme southeastern New England tonight and Saturday morning, and then across Nova Scotia late Saturday or Saturday night.

Slow weakening is expected through Saturday. After that, Dorian is forecast to become a post-tropical cyclone with hurricane-force winds by Saturday night as it approaches Nova Scotia. 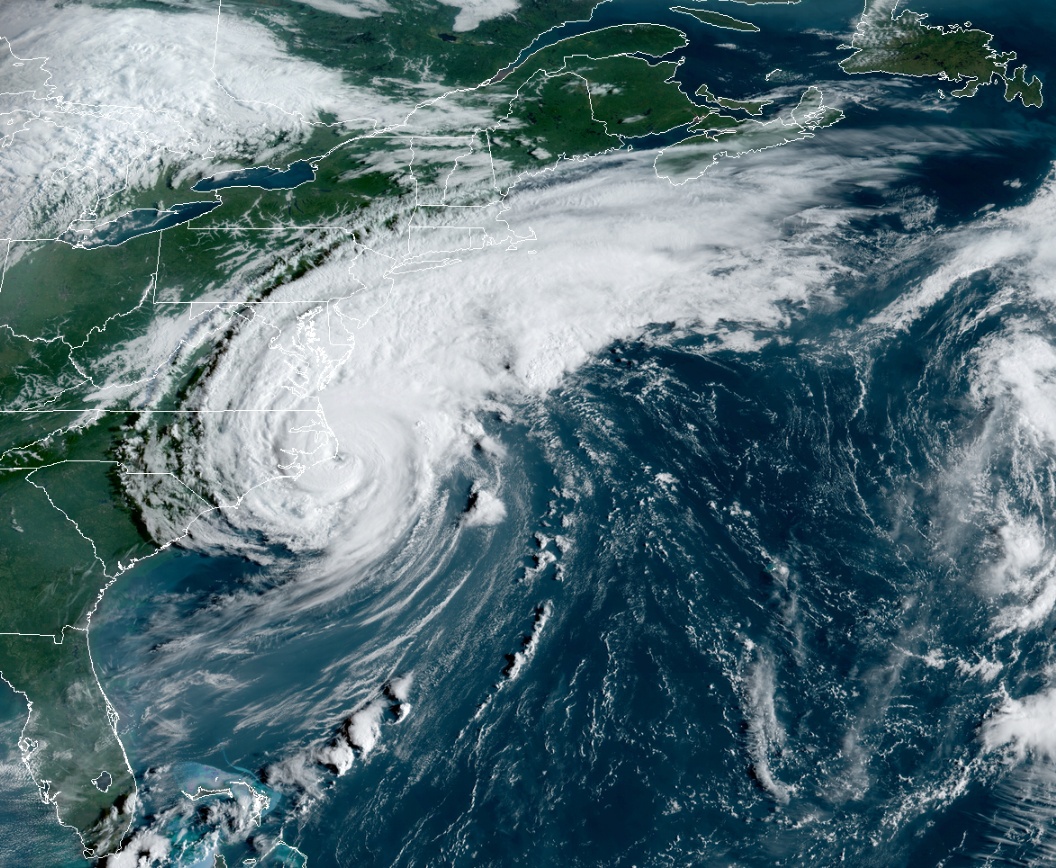 Salter Path to Duck NC, including Pamlico and Albemarle Sounds and the Neuse and Pamlico Rivers: 1.2 to 2.1 m (4 to 7 feet)

Water levels could begin to rise well in advance of the arrival of strong winds. The surge will be accompanied by large and destructive waves. Surge-related flooding depends on how close the center of Dorian comes to the coast, and can vary greatly over short distances.

Storm Surge is likely in the Gulf of St. Lawrence, the Southwest Coast of Newfoundland, and Eastern Nova Scotia.

Dorian is expected to produce the following rainfall totals through Saturday:

This rainfall may cause life-threatening flash floods

Large swells will affect much of the southeastern United States coast from northern Florida through North Carolina during the next couple of days. These swells are likely to cause life-threatening surf and rip current conditions. 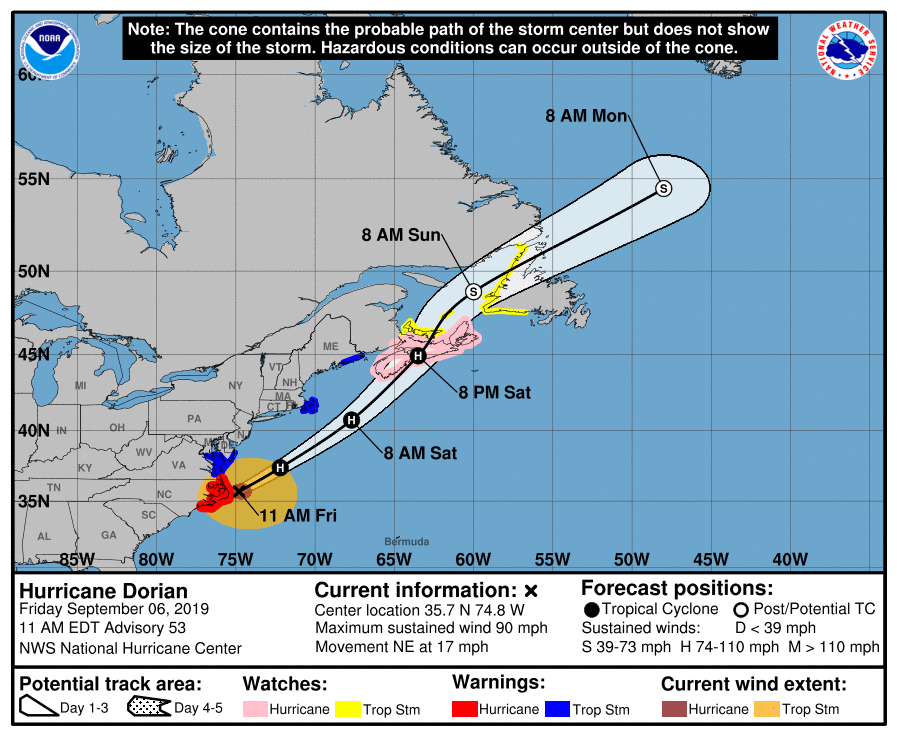 Widespread flooding was reported and tornadic damage throughout the Carolinas. NWS SPC is reporting 13 preliminary tornadoes in North Carolina. 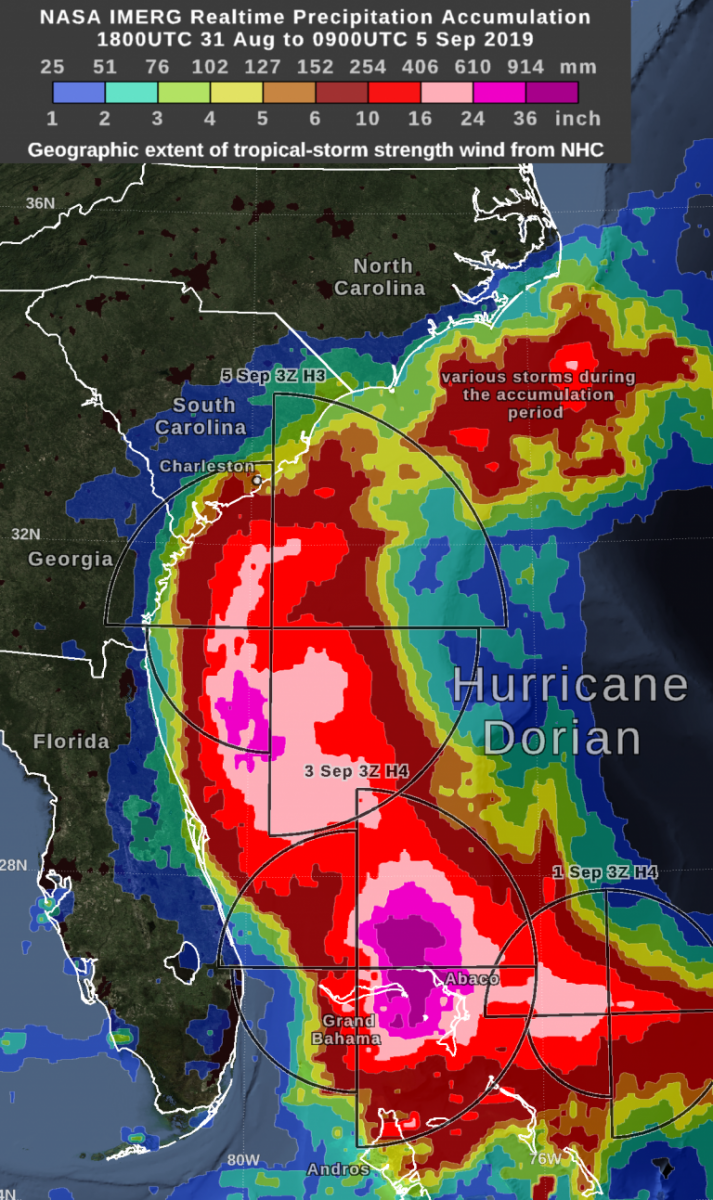 At least 4 people lost their lives in the United States – 2 in Florida and 1 each in North Carolina and Puerto Rico.

At least 30 people died in the Bahamas but authorities there say the number will continue rising.