The remnants of Ex-Hurricane "Rosa" moved through Arizona on Tuesday, October 2, 2018, causing widespread moderate to heavy rainfall. For Phoenix, it was one of the rainiest days on record, NWS said.

Tropical Storm "Rosa" approached the central and northern Baja California on October 1 and moved over the peninsula into the northern Gulf of California, bringing flooding rains to portions of Baja California, Sonora and the southwestern US. Its remnants then moved across the Desert Southwest, producing one of the wettest days Phoenix has ever seen.

One person drowned in Mexico after being swept away by fast-moving floodwaters in the city of Caborca, Sonora, on the Sea of Cortez. A state of emergency was declared for Ensenada and Mexicali.

October 2, 2018 is now the city's 8th wettest day of all time, making this October its third wettest on record. 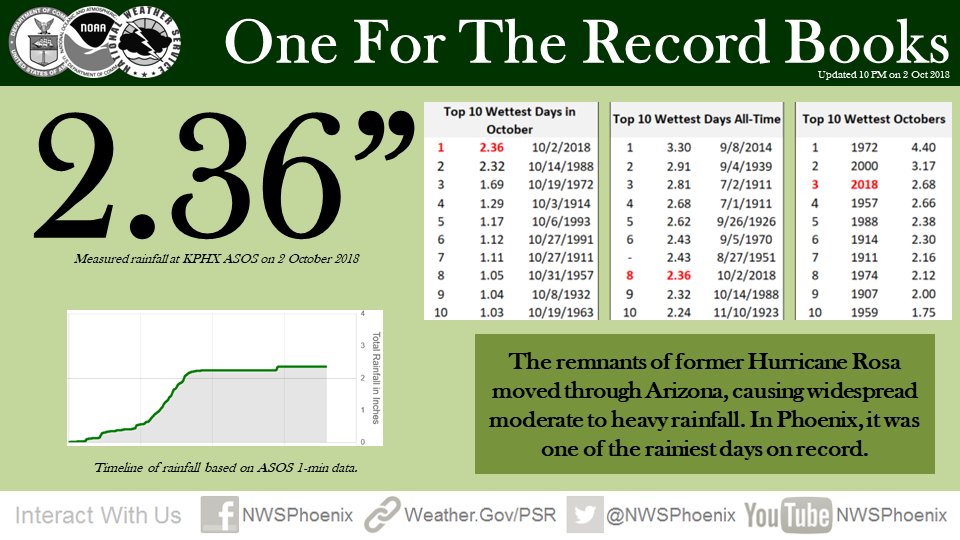 A Flash Flood Warning has been issued on the Tohono O'odham Nation until 00:15 MST, October 3 because of an imminent dam failure near the Menagers Dam community. NWS said emergency management continues to report rising water in the Menagers Lake with the lake level within 30 cm (1 foot) of overflowing.

The Tohono O'odham Department of Public Safety said Menagers Dam residents need to move as far to the north end of the community as possible and avoid the area for the next 24 hours.

Heavy rain caused a riverbed to overflow, trapping six people and 10 vehicles in a waist-deep water at the intersection of Tatum and Shea boulevards in northern Phoenix, the AP reports.

Good lord I have never seen this wash flow like this before. #azwx pic.twitter.com/zokp0m1TUe

Check out one of the most intense rainbows we've ever seen above Phoenix, AZ #azwx Photo: @geraldferguson pic.twitter.com/9cRNlOGNTf

Rosa also brought heavy rainfall to parts of Southern California where floodwaters surged across sections of Highway 95 in San Bernardino County early Monday morning, depositing rocks and other debris across the road.

Rosa dissipated by 15:00 UTC on October 2, but the threat of heavy rain and flash flooding continued over the Desert Southwest.