Another super typhoon brewing in the Pacific, TD28 drenching Guam

A new tropical depression formed near Guam on September 20 and is currently dropping heavy rain on the region.

This system has the potential to become another super typhoon in the days ahead.

Storm Ali wreaked havoc across Ireland and UK on September 19 and produced a wind gust of 146 km/h (91 mph) in Killowen in County Down, Northern Ireland.

This is now officially the strongest wind gust measured in Northern Ireland in September since records began in the 1880s.

The National Weather Service in Wakefield confirmed a total of nine tornadoes were spawned by remnants of TC Florence in Virginia on September 17.

The strongest was an EF-2 in Chesterfield County, with estimated winds of 201 km/h (125 mph). This tornado left 1 person dead and 1 injured. 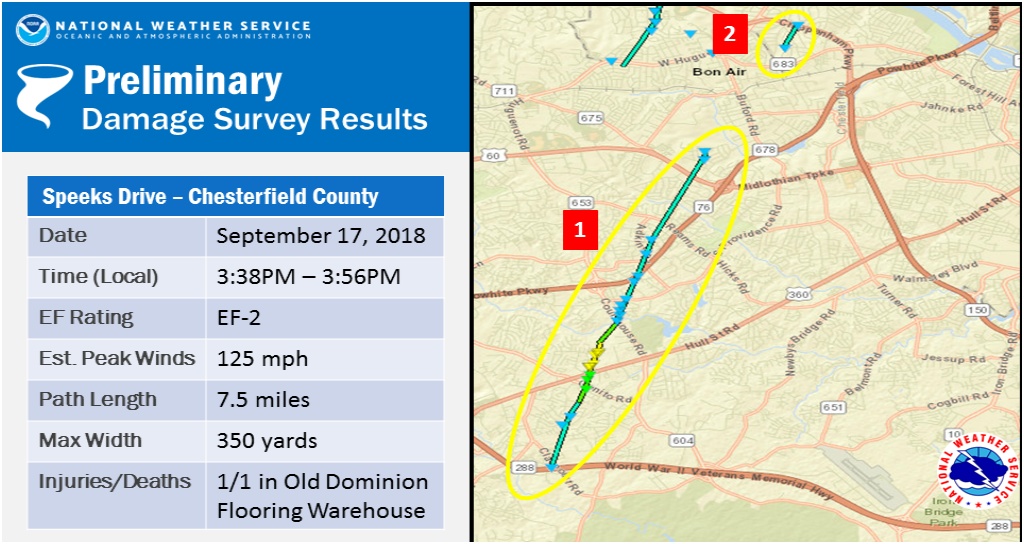 2 people were found the dead and 11 others were injured on September 19 after severe flash floods hit the Djhebli Ahmed Real Estate in Constantine, the Algeria Press Service (APS) reported September 20.

Civil Protection units rescued 11 people who were stranded in their cars.

At least 70 members of the Civil Protection, twelve trucks, and 6 ambulances were mobilized for the rescue operations.

Just one day after Storm Ali left two people dead and more than 140 000 homes without power, the second named storm of the season – Bronagh – threatens southern Ireland and central and southern Britain with strong winds and squally rain today and tomorrow, September 20 and 21, 2018.

There is also a potential for another storm to form late Saturday into Sunday, September 22 into 23.

An early fall storm is on the way for British Columbia late this week, bringing heavy rainfall, high-elevation snow, and strong winds to the province, The Weather Network reports.

Lower elevations will see only rain from this system, with widespread totals in the 25 – 50+ mm (1 – 2+ inches) range for Metro Vancouver and the Fraser Valley, meteorologists said.

With trees still carrying their summer foliage, as well as the stress from this summer's drought conditions, there is a potential for some downed limbs and power outages on Friday and Saturday, September 21 and 22 as this system moves on shore.

European summer ends with a blast

The very first Arctic outbreak of the autumn will blast across Europe early next week.

"Much, much colder weather will push all the way across central and eastern Europe including Balkan peninsula and will also be pushed into far south Mediterranean and North Africa," Severe Weather Europe meteorologists report.

WeatherWatch.co.nz is warning farmers in the lower South Island to be prepared for a late winter storm next week as a polar southerly direct from the Antarctic roars up towards New Zealand.

"This looks to be one of the more significant southerlies of 2018, at least for the lower part of New Zealand," says WeatherWatch.co.nz head forecaster Philip Duncan.

There have been changes afoot to the thermal features on Geyser Hill in Yellowstone's Upper Geyser Basin in the past week, the Yellowstone Volcano Observatory reports.

The eruption ejected not only rocks, but also material that had fallen or been thrown into the geyser in years past, like coins, old cans, and other human debris.

The last known similar-sized eruption of the spring was in 1957, although smaller eruptions occurred as recently as 2004.

As a result of these changes, Yellowstone National Park has closed portions of the boardwalk.

A new eruption started at Piton de la Fournaise, Reunion during the early morning hour of September 15, 2018, following a seismic crisis that started at 04:45 UTC (01:45 local time). Volcanic tremor appeared around 08:25 UTC and magma reached the surface, opening one or more eruptive fissures on the southern flank of the volcano near Cratère Rivals.

This is how the volcano looked like on September 19, 2018 as seen through eyes of ESA's Sentinel:

A large landslide buried between 20 and 24 homes near a limestone quarry site on the fringes of Naga City of Cebu Province in the central Philippines early September 20, 2018. Most of the residents were still asleep when the slide took place.

12 bodies have been retrieved and another 12 people pulled out alive in the first few hours.

Rescuers are looking for about 50 to 80 trapped people.

LOOK: A woman was rescued from the landslide in Naga City. | via Arni Aclao pic.twitter.com/Vpj96kGs4t

Compared to hurricane Florence, that stalled over the state of North Carolina, super typhoon Mangkhut moved fairly quickly across the western Pacific. Mangkhut killed at least 81 people in the Philippines.

Storm analysis of Hurricane "Florence" from a suite of satellites

Tropical Storm "Isaac" fired off a barrage of Gigantic Jets

Tropical Storm "Isaac" dissipated in the Caribbean on September 15 but just before it died, it fired off a barrage of Gigantic Jets. Frankie Lucena video recorded the display as the storm passed south of his home in Puerto Rico.

Unit 3 reactor at Indian Point was shut down September 18 after a steam leak was discovered. Federal safety regulators say the leak was on the non-nuclear side of the Unit 3 building in Buchanan.

The shutdown is reportedly unrelated to a water leak in a backup cooling system that led to a nine-day shutdown, which ended Monday.