High sulfur dioxide emissions and other gasses and particles released during ongoing eruption of Hawaiian Kilauea volcano have reached Micronesia, some 4 000 km (2 500 miles) west of the volcano, forcing authorities to issue health alerts.

The latest NOAA HYSPLIT model run projects haze produced by Kilauea volcano in Hawaii to spread southwestward over the next few days, the US National Weather Service based in Guam said Sunday, May 27, 2018. A haze plume is barely visible on the latest visible satellite loops, but local weather observers at both Kwajalein and Majuro in the Marshall Islands have reported haze at the airports today. This haze is expected to spread farther westward and reach Kosrae, Pohnpei and possibly Chuuk over the next few days.

Residents with respiratory health problems should stay indoors and avoid being outdoors when haze is seen and pilots and mariners need to be aware of lower visibilities caused by this haze, meteorologists said.

Visibility has increased and haze decreased on Monday, May 28, likely from increased showers across the region.

Widespread showers from Chuuk eastward have also helped to reduce the haze content for areas south of 10N on Tuesday, May 29 and meteorologists expect concentrations will decrease as Central Pacific winds redirect haze farther to the north and away from Micronesia. 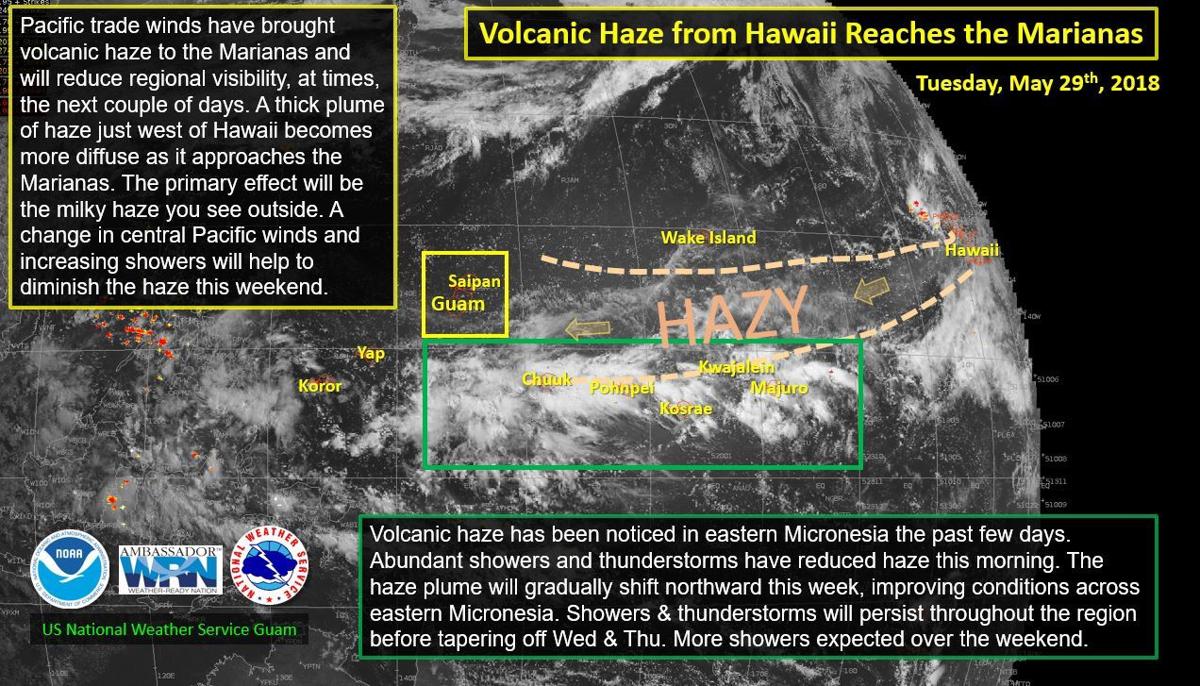 At 09:22 CHST on May 29, Guam meteorologists said the haze has reached the Marianas.

"Latest observations across the Marianas showing reduced visibilities of around 11 km (7 miles) indicate that volcanic haze has reached the region. Satellite imagery shows a dense plume of haze spanning the Central Pacific that becomes more diffuse closer to the Marianas."

Winds are expected to continue bringing haze into the Marianas over the next couple of days. However, a through in the Central Pacific is expected to redirect haze farther to the north later this week thus reducing it the Marianas.

With the possibility that Kilauea may remain in a heightened state of activity, additional haze events are possible in subsequent weeks.