A powerful hailstorm hit parts of Brazos Valley, Texas on March 18, 2018, leaving impressively sized hail behind. On Monday, strong tornadoes, very large hail, and damaging winds are expected across parts of the Tennessee Valley and Southeast during the late afternoon and evening.

Texas hailstorm occurred as a part of series of storms that hit the Brazos County area, bringing powerful wind gusts up to 128 km/h (80 mph) and downing trees in some areas.

The hardest hit were Caldwell and Walker counties where baseball-sized hail damaged homes and cars.

There have been no immediate reports of injuries from the storms.

There is an Enhanced Risk of severe weather for the Tennessee River Valley today, with the potential for strong tornadoes, very large hail and damaging winds, NWS warns.

The Enhanced Risk continues on Tuesday, this time for northern Florida and coastal Georgia and South Carolina, where a corridor of severe winds, and perhaps a couple tornadoes, will be possible.

Severe thunderstorms expected over parts of the Tennessee Valley this afternoon and tonight: 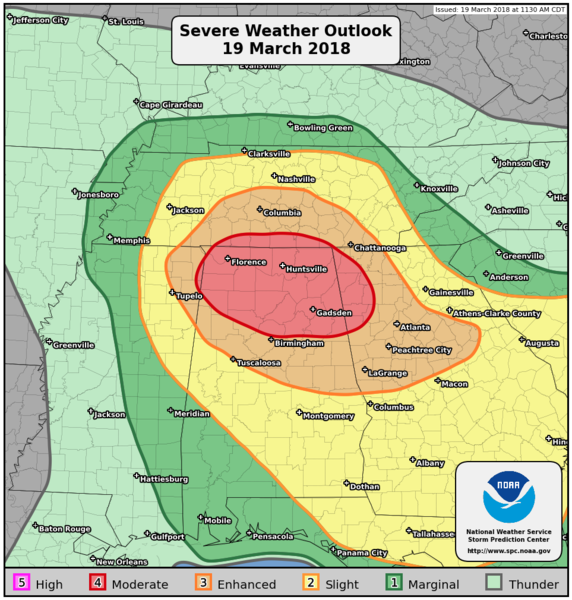 Strong tornadoes, very large hail, and damaging winds are expected across parts of the Tennessee Valley and Southeast during the late afternoon and evening.

Review your severe weather safety procedures for the possibility of dangerous weather today. Stay tuned to NOAA Weather Radio, weather.gov, or other media for watches and warnings. A tornado watch means that conditions are favorable for tornadoes to form during the next several hours. If a tornado warning is issued for your area, move to a place of safety, ideally in a basement or interior room on the lowest floor of a sturdy building.