At least three people have died and several went missing on Saturday and Sunday, February 25, 2018 as multi-day severe weather event continues across southern and central United States. This brings the total death toll since Tuesday, February 20 to six. If officially confirmed, February 24th will become the first day with a tornado-related death since May 16, 2017, ending the record streak without a tornado death at 263 days. Over 32 000 customers are without power across Kentucky, Indiana, Ohio and Texas as of 08:00 UTC, February 25.

The southern Plains, lower and middle Mississippi, Tennessee, and Ohio Valley have seen a significant amount of rainfall over the last few days and additional rainfall will continue, exacerbating already saturated soils. "As such, a high risk of flash flooding and flooding is possible through Sunday morning," NWS warned. "If you live near a river or stream, be prepared for rapid rises."

Numerous roads and structures have been damaged or destroyed and at least 6 people have lost their lives this week. Several others are missing, including 2 people swept away in flash flood near Oxmoor, Louisville, KY while crossing a bridge. 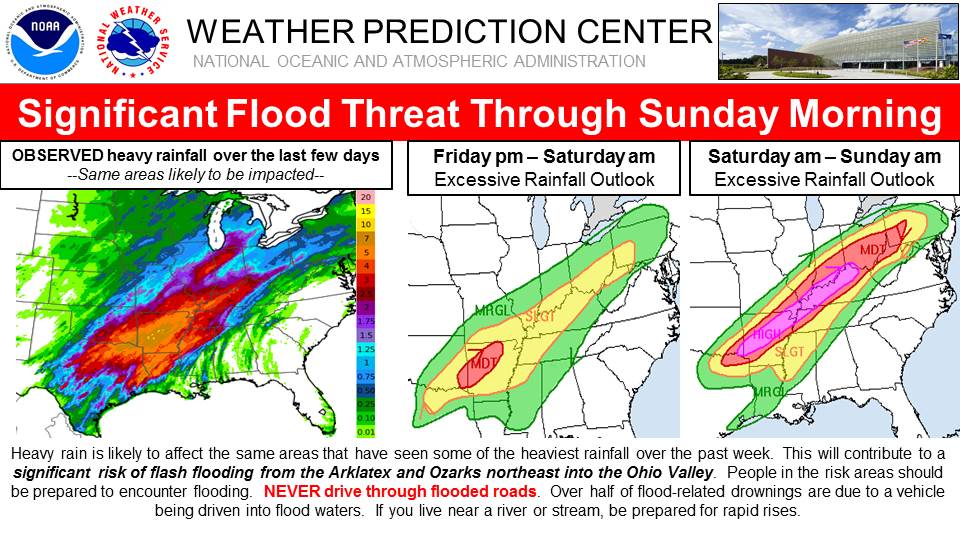 A 52-year-old woman died early Tuesday, February 20, after her vehicle rolled into a rain-filled ditch and was submerged along Illinois Route 45, south of Barr Road in Will County, IL.

A 1-year-old girl was found dead in standing water in her family's Michigan backyard on February 21. State police said she reportedly wandered away from her home and entered the water.

A 53-year-old man was killed after his car was swept away as he tried to drive across a flooded bridge near Stilwell, Oklahoma on February 21. Another body was found in a submerged vehicle in Franklin, Kentucky's Simpson County on February 24.

According to Logan County Kentucky Sheriff's Department, an elderly woman was killed after a tornado hit her home near Adairville on Saturday, February 24. Her husband was outside when the tornado hit and he sustained only minor injuries. Logan County EMA officials said the victim was inside the home when it collapsed on her, adding that this community is very rural and the couple did not hear any sirens.

Numerous structures in the area were damaged or destroyed, including farms and homes, authorities said, adding that at least 500 people in the area are without power.

If NWS confirms the Logan County tornado, it would end the longest period without a tornado-related fatality in the United States at 263 days (since May 16, 2017).

A fatal tornado has been confirmed in Logan County, Kentucky. The twister destroyed a home, killing at least one person in its path. pic.twitter.com/rQn9SOQvxT

Possible #tornado near Alvaton, KY caught on video by @tuckersmommy11
Another possible tornado in Adairville, KY has killed at least one, and if confirmed, this unfortunately would end the record streak without a tornado death at 263 days (May 16, 2017). pic.twitter.com/YfDKCydMcg

Severe damage was also reported across the state line in nearby Roberson County, Tennessee where a home was hit by an apparent tornado. Local media say there were no injuries and everyone who lives in that home is alive and accounted for.

Tonight's storms have also resulted in severe damage to several areas of Clay County, Arkansas where at least one person was killed, bringing the total death toll to six. Clay County Sheriff's Department reports power outages, power poles down and flooded roads in the area.

Another possible tornado hit Keiser, Arkansas causing significant damage, according to the local sheriff's department. There are no reports of injuries after the damage was surveyed. Storm damage and possible tornado damage was also reported in Osceola, AR where a roof was blown off of a hotel.

Homes were damaged and residents reportedly trapped by debris near the town of Union City in northwestern Tennessee. Significant structural damage and at least two injuries were reported east of Clarksville just after 21:00 CST, Saturday. 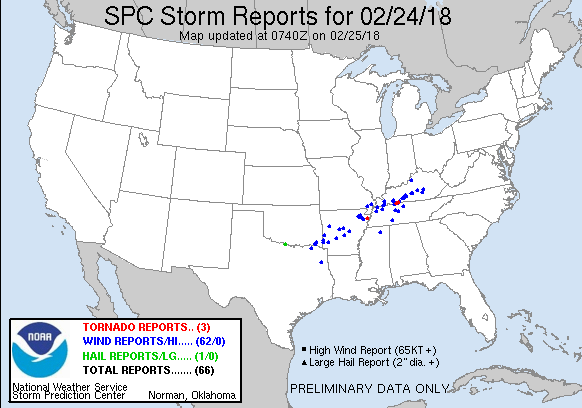 Sunday will bring more heavy rain, exacerbating flooding over central and southern U.S. In addition, severe thunderstorms are expected over portions of the Mississippi, Ohio, and Tennessee Valleys. Some storms may produce large hail, damaging winds, and tornadoes, NWS warns.

"A wave of low pressure over the Southern Plains will deepen rapidly and occlude while moving through the Great Lakes Sunday morning," NWS forecaster David Roth noted.

The system will produce snow – heavy at times – to the left of its track over parts of the Northern Plains, the Upper Midwest, and Upper Peninsula of Michigan by Saturday night, clearing the Great Lakes by Sunday evening, he said.

Showers and thunderstorms are expected to linger across the Western/Central Gulf Coast into Sunday night as the cold front stalls and weak waves ripple along the boundary. Precipitation then moves eastward into a more stable airmass as an area of rain into the Southern Mid-Atlantic/Southeast Sunday afternoon and evening and the Northeast on Sunday.

Snow and areas of freezing rain are expected across New England.