At least three people have died in widespread floods across central and southern United States over the past couple of days. Friday, February 23 will be another day with heavy rain which will further increase the risk of flash flooding and long-term flooding in the Southern Plains and the Lower/Mid-Mississippi and Ohio River Valleys. The NWS Weather Prediction Center has issued Moderate Risks for excessive rainfall for parts of these regions on Friday and into the weekend. Some areas may see an additional 100 – 130 mm (4 – 5 inches) of rain over the next 3 days.

As of 13:00 UTC on February 23, a total of 233 gauges across the United States are in flood stage. Of them, 21 are in major flood stage (Illinois, Indiana and Michigan), 53 are in moderate flooding and 159 in minor. With more heavy rain expected in this region over the weekend, the situation will only get worse. 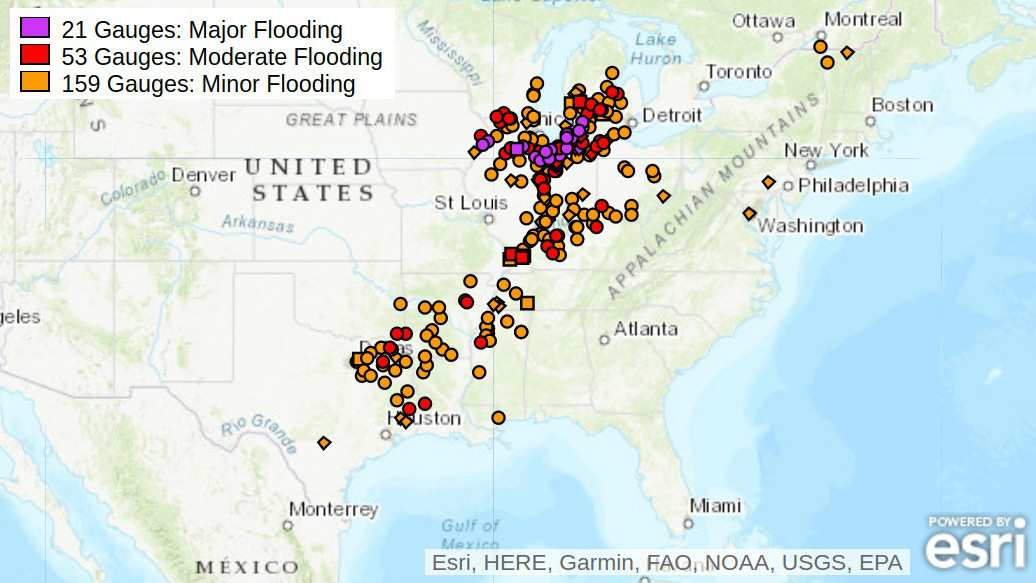 Authorities confirmed three deaths so far. A 52-year-old woman died early Tuesday, February 20, after her vehicle rolled into a rain-filled ditch and was submerged along Illinois Route 45, south of Barr Road in Will County, IL. Peotone Fire Chief Willian Schreiber said there were multiple crashes at that intersection, which is a 'very low spot,' with water flowing across the road.

A 1-year-old girl was found dead in standing water in her family's Michigan backyard on February 21. State police said she reportedly wandered away from her home and entered the water.

The third casualty is a 53-year-old man whose car was swept away after he tried to drive across a flooded bridge near Stilwell, Oklahoma.

Firefighters rush to #rescue a PA police officer from the roof of his SUV. The vehicle was swept away by rising water. The officer was trapped for 35 minutes before crews pulled him to safety. We speak to one of the rescuers at 7:40aET. pic.twitter.com/3jd8hX9MWT

This drone footage captures the severity of the flooding in Elkhart, Indiana, where a state of emergency was declared Wednesday: https://t.co/N2LYpkhllM pic.twitter.com/dtGBWGLPFs

Areas that have been getting relentless #rain are in for another shot today and over the weekend. #Severe weather is also a concern with these storms. TOR:CONs are up to 4. AMHQ has your forecast now until 9aET. pic.twitter.com/UucwM6v99r

The system pulls a front extending roughly from the Western Ohio Valley to the Western Gulf Coast that will move eastward off the Northeast/Northern Mid-Atlantic Coast then westward to a wave of low pressure over the Middle Mississippi Valley by Saturday evening, February 24. Snow will develop over parts of the Northern Plains to the Upper Mississippi Valley/Upper Great Lakes that will lift northeastward into Canada by Friday evening.

Showers and thunderstorms will develop along and ahead of the front from the Western Gulf Coast/Southern Plains to the Ohio Valley that will lift northward into parts of the Middle/Lower Mississippi Valley by Friday evening. Additional showers and thunderstorms will also develop over parts of the Central Gulf Coast by Friday evening.

The rain will move off the Northeast Coast/Northern Mid-Atlantic Coast by Saturday morning and a region of rain/freezing rain will develop over parts of interior New England Friday into Friday evening.

Overnight Friday, showers and thunderstorms will develop along and ahead of the associated boundary over the Southern Plains that will move to the Middle/Lower Mississippi Valley by Saturday evening.