A blast of increasingly cold Arctic air, dubbed 'Beast from the East,' is arriving to Europe and is expected to hang over a large part of the continent through February and engulf all of it from March 5 for at least a couple of days. Very cold Arctic air will dip down south more than usual and there is a potential for a historic cold spell so make sure you prepare on time.

This noticeable change in weather is linked to Sudden Stratospheric Warming (SSW) event that took place some 30 km (18.6 miles) above the North Pole last week when the temperature suddenly rose for about 46 °C (83 °F), from -82 °C (-115.6 °F) to about -35 °C (-31 °F). This warming results from a breakdown of the usual high-altitude westerly winds and often leads to a switch in weather over Europe. 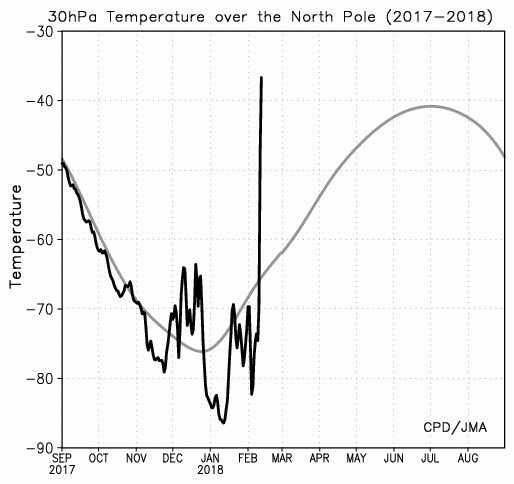 The result will be an extended period of cold and dry weather across much of Europe lasting through the rest of February and well into March.

"Just when we had almost given up on the idea of a polar vortex split or breakdown in the stratosphere, it finally happened last week," Dr. Todd Crawford, chief meteorologist at The Weather Company, said. "This will be the first period of extended North Atlantic blocking in about five years, so the change should be quite noticeable."

With brief warming periods, very cold temperatures (below normal) will likely last through the rest of March.