Category 4 Hurricane "Harvey" made landfall around 03:00 UTC on Saturday, August 26, 2017 at Rockport, Texas with winds of 215 km/h (130 mph). It then stalled over the coast of central Texas, dumping extreme amounts of rain. Harvey is the first major hurricane to make landfall in the United States since Wilma in 2005, ending a record 12-year period with no major hurricanes making landfall in the US. In terms of rainfall it brought and flooding it caused, experts say Texas has never seen an event like this, adding that it could become the worst flooding disaster in the history of United States.

Harvey is also the first hurricane to hit the state of Texas since Ike in 2008, and the strongest to hit the state since Carla in 1961. The system has since weakened into a tropical storm, but is still dumping extremely heavy rain, and will continue to do so over the coming days. It is now expected to move slightly off the coast, make another landfall over the SE Texas on Wednesday, August 30 and move over the NW Louisiana into Arkansas and toward Tennessee.

Tropical Storm "Harvey" formed on August 17 and moved swiftly westward into the Caribbean Sea under the influence of an expansive ridge of high pressure to its north. It was downgraded to a tropical depression at 21:00 UTC on August 19, and six hours later, it was declared an open tropical wave.  A reconnaissance aircraft investigating its remnants at 15:00 UTC on August 23 indicated that it once again acquired a well-defined center, and the NHC upgraded it to a tropical depression accordingly. The system began to slowly consolidate amid an increasingly favorable environment, attaining tropical storm intensity by 06:00 UTC on August 24.

Further deepening occurred as the storm approached the coast of Texas, with Harvey becoming a Category 4 hurricane at 23:00 UTC on August 25, based on reconnaissance aircraft data. Around 03:00 UTC on Saturday, August 26, the hurricane made landfall at peak intensity over the northern end of San Jose Island, about 6 km (4 miles) east of Rockport with winds of 215 km/h (130 mph) and an atmospheric pressure of 938 hPa. Harvey became the first major hurricane to make landfall in the United States since Wilma in 2005 and the strongest in terms of wind speed to hit the country since Charley in 2004. It was the first hurricane to strike Texas since Ike in 2008, the first major hurricane in the state since Bret in 1999, and the strongest in Texas since Carla in 1961.

In Houston metro area, days of heavy rain caused unprecedented and catastrophic flooding, with parts of southeast Houston recording more than 610 mm (2 feet) of rain in just 24 hours. Houston Mayor Sylvester Turner said that as of 17:00 local time Sunday, August 27, the city received nearly 6 000 calls for rescues and that more than 1 000 have been rescued. As of early August 28, at least 5 persons lost their lives, but flooding is still not over as Harvey is now expected to move slightly off the coast and make another landfall on Wednesday, August 30.

Meteorologists say the flooding in Houston in some locations rivals what was observed during Tropical Storm "Alison" in 2001, one of the most devastating rain events in the history of the United States. Neither historical data nor weather forecasts could adequately predict this extraordinary storm that, before leaving Texas, would dump as much as 80 percent of the area’s average annual rainfall over some Houston and Harris County neighborhoods, simultaneously affecting more than 2 million people. When the local rains finally eased, Allison had left Harris County, with 22 fatalities, 95 000 damaged automobiles and trucks, 73 000 damaged residences, 30 000 residents in shelters, and more than $5 billion in property damage in its wake.

Dr. Greg Postel, meteorologist and hurricane specialist for The Weather Channel, said the flooding unfolding in the Houston area "could be the worst flooding disaster in U.S. history;" and Gov. Abbott, appearing on Fox News Sunday, said: "We're measuring rain these days not in inches but in feet."

Swollen rivers in east Texas aren't expected to crest until later this week, CNN reports, but federal officials are already predicting the system will drive 30 000 people into shelters and spur 450 000 victims to seek some sort of disaster assistance.

"This is a landmark event for Texas," said FEMA Administrator Brock Long. "Texas has never seen an event like this." But, Long warned, Harvey presents a dynamic situation, and "every number we put out right now is going to change in 30 minutes."

Harvey will likely surpass 2008's Hurricane "Ike" and 2001's Tropical Storm "Allison," two of the most destructive storms to hit the Gulf coast in recent memory, he said. Around 13 million people from Corpus Christi to New Orleans are under flood watches and warnings as of Monday morning as Harvey's storm bands repeatedly pummel the same areas.

At 12:00 UTC (07:00 CDT) on August 28, the center of Tropical Storm "Harvey" was located about 40 km (25 miles) east of Port O'Connor, Texas. Harvey is moving toward the southeast near 6 km/h (3 mph) with the minimum estimated central pressure of 997 hPa. A slow southeastward motion is expected today and a slow northeastward motion is expected to begin on Tuesday.  The center of Harvey is emerging off of the middle Texas coast, and it is expected to remain just offshore through Tuesday, August 29.

Maximum sustained winds, at the time, were near 65 km/h (40 mph)) with higher gusts. Slight restrengthening is possible later today and Tuesday. 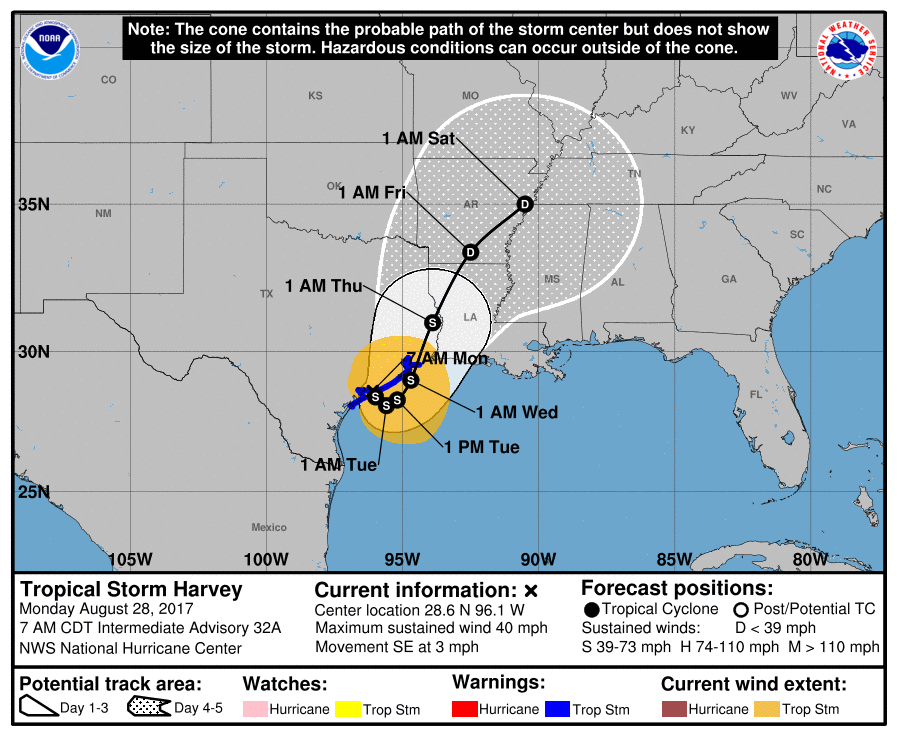 "These rains are currently producing catastrophic and life-threatening flooding, and flash flood emergencies are in effect for portions of southeastern Texas," the center said and warned all residents not to attempt to travel in the affected area if they are in a safe place. "Do not drive into flooded roadways. Please sea warnings and products issued by your local National Weather Service office for additional information on this life-threatening situation."

The water is expected to reach the following heights above ground if the peak surge occurs at the time of high tide:

The deepest water will occur along the immediate coast near the area of onshore winds. Surge-related flooding depends on the relative timing of the surge and the tidal cycle, and can vary greatly over short distance

Swells generated by Harvey are affecting the coasts of Texas and Louisiana. These swells are likely to cause life-threatening surf and rip current conditions.

A few tornadoes are possible today and tonight from the upper Texas coast across parts of southwestern and south-central Louisiana.