After record-breaking rains that hit Japan this week, heavy rains are now spreading through the neighboring South Korea. The country was drenched with heavy rain today, with generally up to 50 – 60 mm (1.96 to 2.36 inches) of rain per hour and, in places, as much as 180 mm (7 inches) per hour. The heavy rains are expected to end the country's prolonged drought period.

According to data provided by the Korea Meteorological Administration (KMA), the South Korea's central region was drenched with up to 50 to 60 mm (1.96 to 2.36 inches) of heavy rain per hour, with some areas in the northern province of Gangwon recording as much as 180 mm (7 inches) per hour from Friday to Saturday morning, July 7 to 8, 2017. 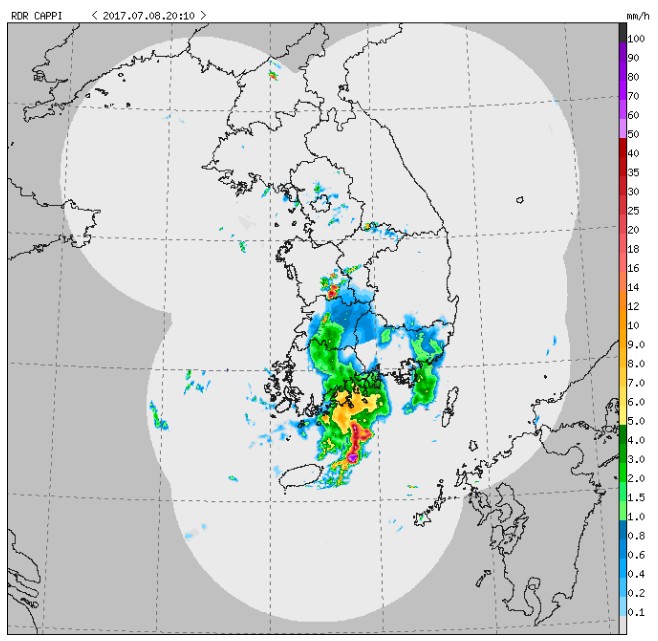 Yonhap News Agency reports that authorities issued heavy rain warnings in Gangwon region and some areas in Gyeonggi Province as of 11:00 local time today. They also issued heavy rain advisories in parts of South Chungcheong Province, including Daejeon and the administrative city of Sejong, the KMA said.

Many roads were flooded by the downpour across the country, but no serious damage such as house flooding has been reported so far. Some traffic accidents were reported, with a few people rescued from water in the central provinces, it added. No flights or shipping operations have been canceled.

The downpour is expected to help end the prolonged drought that had affected many paddy fields in provincial areas. A major dam in a western central province has recovered its water reserve rate to the first double-digit figure since May.

More heavy rain is expected over the weekend.