Tropical Cyclone 03S formed off the coast of Western Australia on January 27, 2017. It is only the third tropical cyclone to form in the 2016/17 southern hemisphere season. This is the fewest on record between January 1 and 27, according to Philip Klotzbach of the CSU.

This system first formed on January 23 in the western area of the Gulf of Carpentaria. After moving west-southwestward over land, the low gradually developed and was designated by the BOM as 14U on January 26. The JTWC began issuing advisories on January 27, classifying it as 03S as it moved over water.

TC 03S is moving further away from the coast. It might intensify over the next 24 hours but should not affect the mainland. 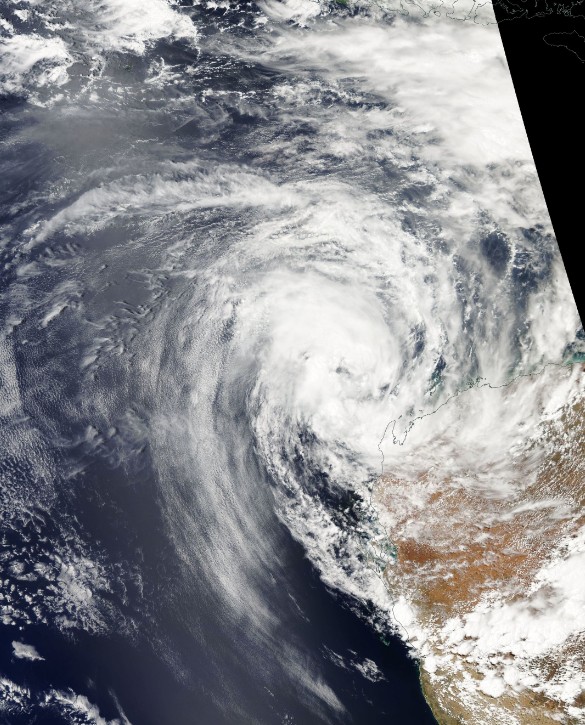 TC 03S is forecast to track westward to west-southwestward along the northern periphery of the low- to mid-level subtropical ridge over the next 48 hours.

Environmental conditions remain marginally conducive for a brief period of intensification within the next day, however, conditions will thereafter become unfavorable due to decreasing sea surface temperature and entrainment of cooler, more stable air.

At 13:19 UTC today, BOM said that the intensity analysis of 74 km/h (46 mph) is influenced by surface observations from earlier in the day coupled with the continued quick translation speed. However, as gales are likely on the southern side only, the system is not rated at tropical cyclone intensity.

In Australia, this system is known as Tropical Low 14U. 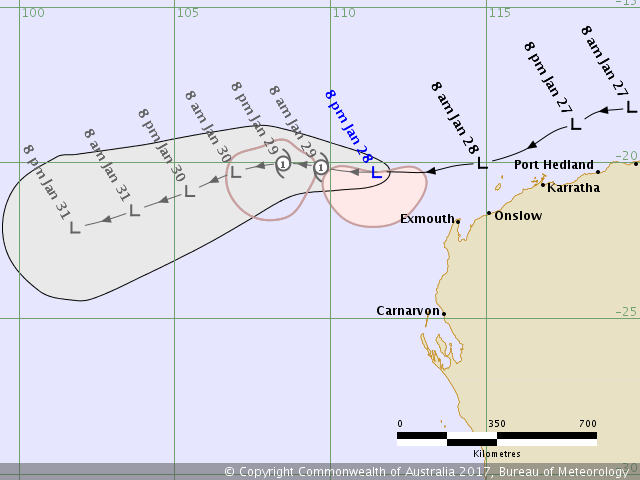 The potential for the system to intensify is contingent on whether overnight convection re-develops. Forecast policy is somewhat conservatively continuing to indicate that gales may extend to northern quadrants for a brief period from Sunday morning [T+12h], BOM said.

"However, this is becoming less likely now in line with the latest model guidance, despite strong model consensus that the system will slow down on Sunday. In any case, gales are likely to continue southwest of the center for a period as the translation speed combines with the synoptic southeasterly flow."