Tropical Cyclone "Debbie" formed in the Coral Sea, east of Australia on March 25, 2017. Debbie's very destructive core is currently expected to cross the coast between Townsville and Proserpine, Queensland on Tuesday morning, March 28 (local time), most likely as a Category 4 tropical cyclone on the Australian tropical cyclone wind scale. Wind gusts up to 260 km/h (161 mph) near the center are expected at the time of landfall. Debbie will also bring up to 500 mm (20 inches) of rain, and a large storm surge.

Debbie is currently a slow-moving Category 2 tropical cyclone expected to reach Category 3 by the end of the day.

Debbie is expected to adopt a steady west-southwest track within the next 12 hours. 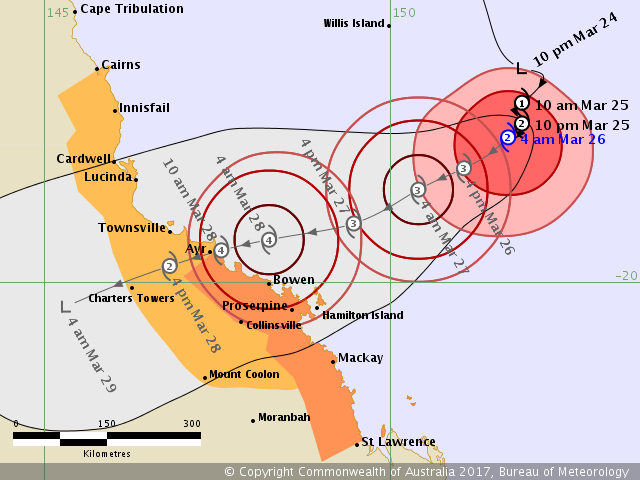 "Gales are expected to develop about the exposed coast and islands between Ayr and Mackay during this afternoon or evening, and could extend further south to St Lawrence on Sunday night. Gales could extend further north to coastal areas between Cairns and Ayr on Monday, as well as further inland to Charters Towers and Mount Coolon," BOM said at 04:00 AEST.

Destructive winds with gusts over 125 km/h (78 mph) are expected to develop about the exposed coast and islands between Lucinda and Mackay on Monday afternoon or evening.

The very destructive core of Tropical Cyclone Debbie is currently expected to cross the coast between Townsville and Proserpine on Tuesday morning, most likely as a Category 4 tropical cyclone, with wind gusts up to 260 km/h (161 mph) near the center.

Abnormally high tides are expected to occur between at least Lucinda and Mackay as the cyclone approaches the coast. Large waves may also develop along the beachfront. People living in areas likely to be affected by this flooding should take measures to protect their property as much as possible and be prepared to follow instructions regarding evacuation of the area if advised to do so by the authorities. 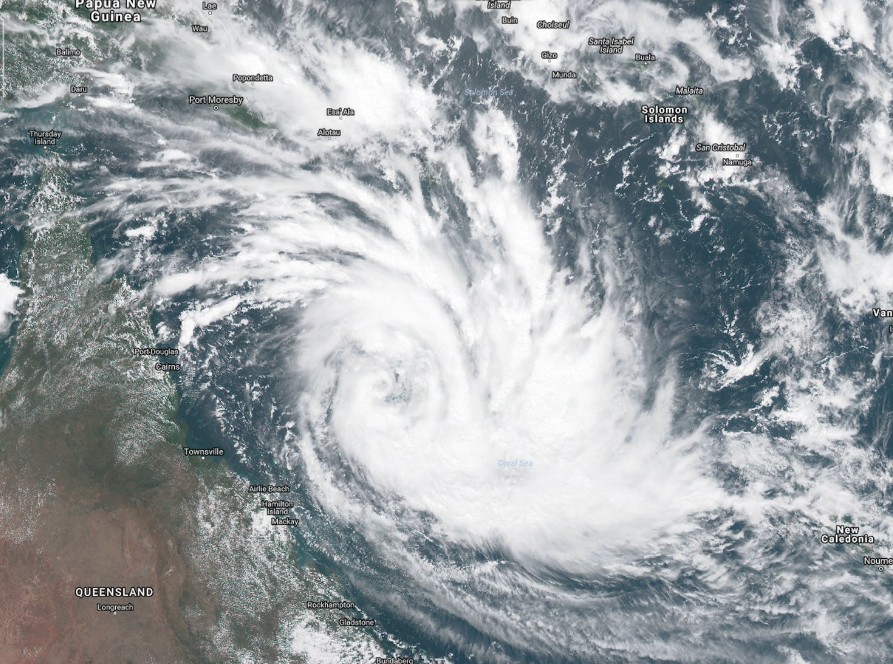 Areas of heavy rain with the potential to cause severe flash flooding are expected to develop about parts of the northern and central Queensland coast and adjacent inland areas late on Sunday and continue through Monday and Tuesday. Major river flooding may also develop over a broad area next week and a Flood Watch is current for coastal catchments between Cairns and Gladstone, extending inland to the eastern Gulf River catchments.

People between Ayr and St Lawrence should immediately commence or continue preparations, especially securing boats and property using available daylight hours, BOM warns. People between Cairns and Ayr, and inland to Charters Towers and Mount Coolon should consider what action they will need to take if the cyclone threat increases.