As of January 26, 2017, forest fires burning across central and southern Chile over the last couple of weeks have consumed an area of 238 600 hectares (589 600 acres / 981 mi2 / 2 386 km2) and killed 6 people. Red Alert for forest fires is in effect in the regions of Coquimbo, Valparaiso, Metropolitana, O’Higgings, Maule and Biobio.

As of 07:00 UTC today, ONEMI reported 99 forest fires, of which 64 are still active, 30 have been controlled and five have been extinguished, in the regions of Coquimbo, Valparaiso, Metropolitan, O’Higgins, Maule, Biobio, La Araucania.

According to local media, as of the same date, the death toll has reached six people, of which five in Maule, and one more in Santiago (Metropolitan). They also reported at least 30 people injured, 4 000 people evacuated and over 340 houses damaged in the regions of Maule, Metropolitan, O'Higgings, Biobio.

The wildfires are described as the worst in Chile's modern history and the country has asked for international help. The United States has sent a massive Boing 747-400 Super Tanker which arrived yesterday. The aircraft flew in from a US air force base in Colorado and is funded (US$ 2 million) by a wealthy Chilean resident in the US, Lucy Ana Aviles. France, Peru and Mexico have also sent help.

The fires are fueled by strong winds and extremely high temperatures on top of nearly a decade-long drought.

"We have never seen something of this size, never in Chile's history. And the truth is we are doing everything that is humanly possible and will continue to do so until the fires are contained and controlled," President Michelle Bachelet said.

Bachelet added that at least some of the fires may have been intentionally started and that there had been a number of arrests. 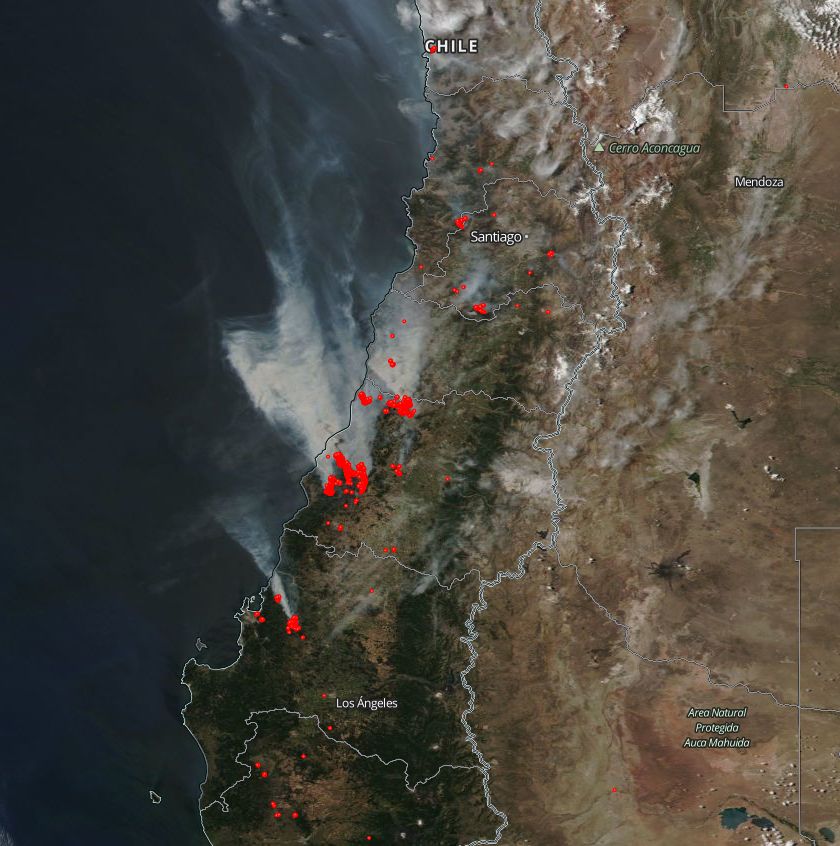 As of early January 26, Red Alert for forest fires is in effect in the regions of Coquimbo, Valparaiso, Metropolitana, O’Higgings, Maule, Biobio.