Mild Strombolian activity accompanied by frequent small ash emissions is occurring at Etna's Southeast Crater (SEC) over the past couple of days, INGV reports. This new eruptive activity marks the return of magma to the surface after almost 8 months of eruptive quiescence on Etna.

The source of this activity is a vent located in the former "saddle" between the old and new cones of the Southeast Crater, which formed during a single eruptive episode between January 31 and February 2, 2015, and which since then had not shown any further signs of activity until mid-December 2016.

Although this new activity marks the return of magma to the surface after almost 8 months, the summit area of the volcano had not been entirely quiet during the past few months.

On August 7, 2016, a small degassing vent opened on the northeastern internal wall of the Voragine crater (VOR), and whose interior since then has been vividly incandescent, creating weak glows at night visible only with light-sensitive instruments. However, in recent weeks these glows have become progressively more intense. 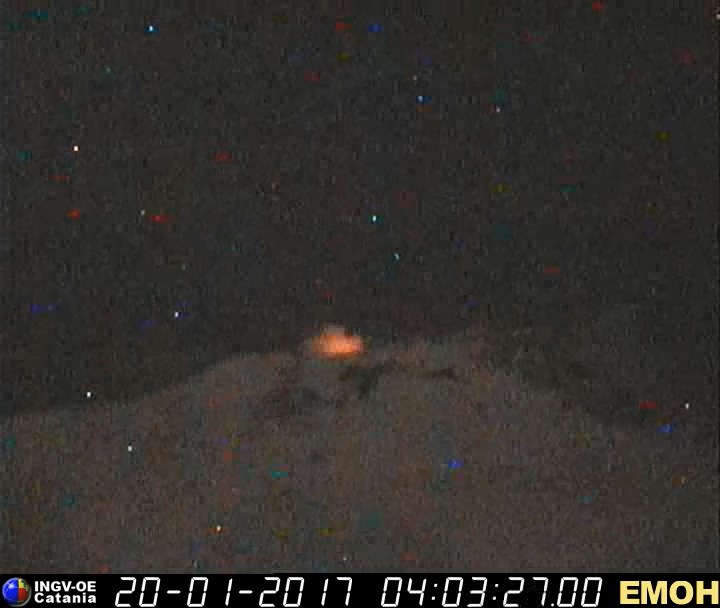 It seems that thus far no solid ejecta have been deposited beyond the rims of the vent, although it cannot be excluded that a few rare and weak Strombolian explosions have occurred, whose products have fallen back into the vent; since its birth on August 7, 2016 this vent has been the main source of degassing from the summit of Etna.

On October 10, 2016, marked subsidence started on the floor of the Bocca Nuova (BN); this process has continued in an episodic manner, sometimes producing small puffs of diluted ash.

During a field visit on December 2 by INGV-OE staff, the area most strongly affected by the collapse, in the western part of the crater, had subsided about 70 m (230 feet) compared to the pre-subsidence leve of the crater floor.

The following photo, taken on December 2, 2016 by Stefano Branca (INGV-OE) shows the collapse area seen from the southwest rim of the BN, with several ledges that mark the successive levels of stagnation between the various episodes of subsidence in the period from October to December 2016. 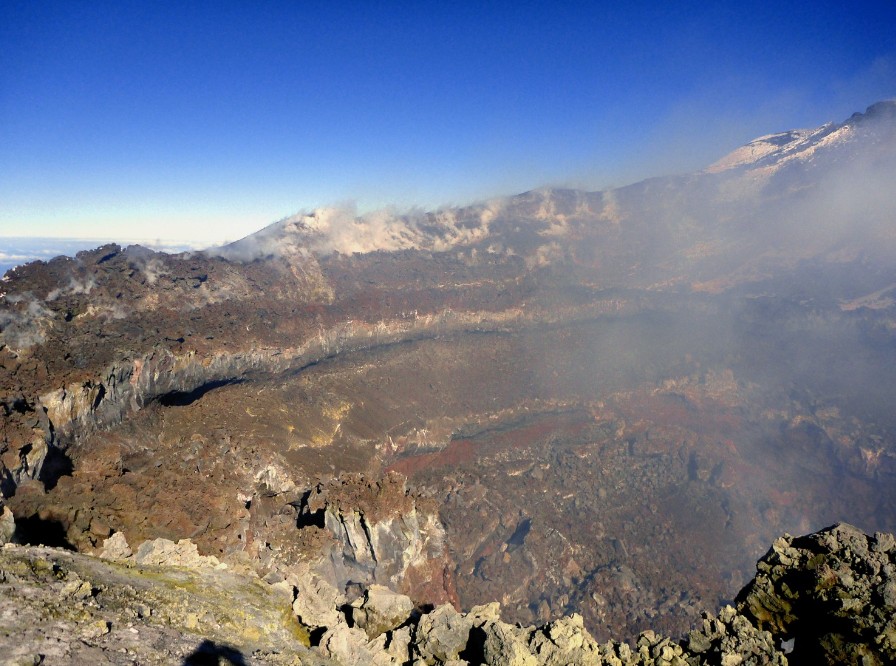 At the SEC, for several months very small and sporadic emissions of vapor mixed with brownish ash were observed at the vent that had opened on November 25, 2015 on the upper east flank of the new cone (NSEC). Rarely, these emissions were visible also as weak anomalies in the images of the thermal monitoring camera at Monte Cagliato (EMCT). In the second half of October, this activity has progressively diminished, and no further evident emissions were observed until mid-December at the SEC.

In the morning hours of December 15, 2016, the visual surveillance cameras of the INGV-OE showed for the first time that small emissions of brown ash were occurring at the "saddle vent" of the SEC (see frame "a" on the next image). On the evening of that day, the images of the high-sensitivity camera EMOH showed weak glows during some of the emissions, and one event was more energetic, launching a small quantity of incandescent material, which then rolled down the steep south slope of the SEC cone. This material was sampled on the following day and seen to consist only of older – though rather hot – rock ripped from the conduit walls, but was not derived from new magma. During the following 5 weeks, rather weak emissions of brownish ash were occasionally seen to issue from the "saddle vent", without being accompanied by incandescence or thermal anomalies. 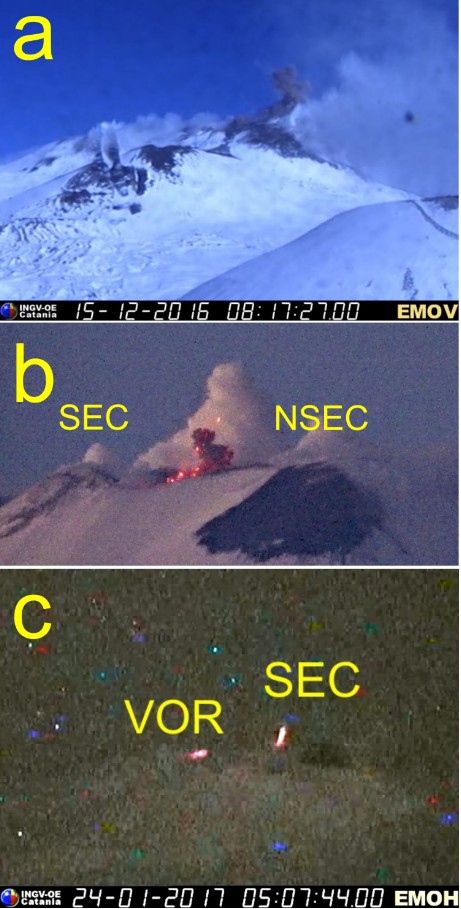 From the early morning of January 20, 2017, the emissions from the "saddle vent" were again visible, this time producing small puffs of black ash and conspicuous anomalies in the images of the thermal surveillance camera on the Montagnola (EMOT).

INGV-OE staff heard bangs, and persons being present on the SEC observed ejections of incandescent pyroclastics along with blocks and ash.

Following a few days of rather bad weather, Etna appeared again cloud-free on the evening of January 23, and mild Strombolian activity was observed, which was accompanied by frequent emissions of small, black ash puffs (see frame "b" on the image above). This activity showed a gradual increase during the night, with some explosions that launched incandescent pyroclastics as far as the base of the SEC cone.

In addition, the usual, fluctuating and at times rather intense glow was visible at the 7 August 2016 vent of the VOR (see frame "c").

On January 24, the frequency of explosions and ash emissions increased, but then showed a slight diminution on the morning of January 25.

Etna on the morning of January 24, 2017. Courtesy Turi Caggegi

All other parameters monitored by the INGV-OE, foremost the volcanic tremor amplitude, show no significant variations.