The National Weather Service (NWS) announced that a large dome of high pressure over the eastern US will cause temperatures between 5.5 and 11.1 °C (10 and 20 °F) above normal over a large portion of the central and the eastern US through October 19. Record high temperatures are possible and peak temperatures may reach 26.7 and 32.2 °C (80 and 90 °F).

A building upper-level high-pressure ridge, extending from the southern Plains into the Southeast will cause above average temperatures across a major part of the central and the eastern US on October 18 and 19. High temperatures are expected to be between 5.5 and 11.1 °C (10 and 20 °F) above the average. Temperatures will rise up to 26.7 °C (80 °F) across much of the Mid-Atlantic and part of the Northwest, and up to 32.2 °C (90 °F) across parts of Texas to the lower Mississippi valley.

The spell of warm weather will be broken by a series of cold fronts that will sweep the central and the eastern US through the short range. The first cold front is expected to move across the Great Lakes, Ohio valley, and portions of the North during October 18, causing scattered showers and thunderstorms while the second low will develop along the first on October 19 and spread showers and thunderstorms from the southern Plains to the Ohio valley. Locally heavy rainfall is possible.

A second cold front will bring a much cooler autumn air mass while traveling over the Midwest during October 18 and 19 and will spread into the Ohio valley by October 20. 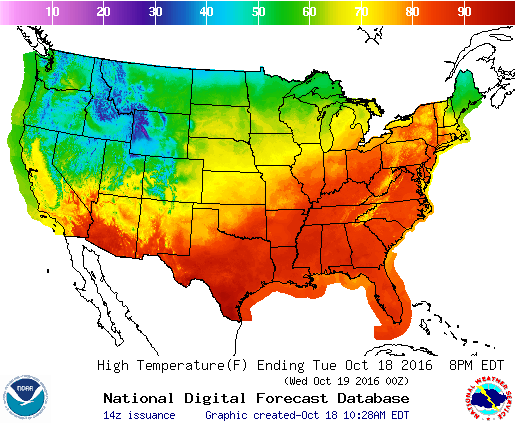 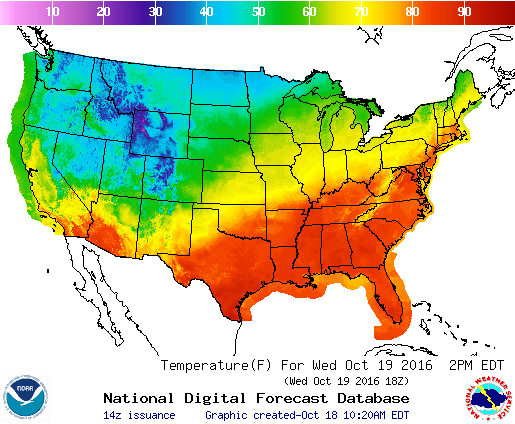 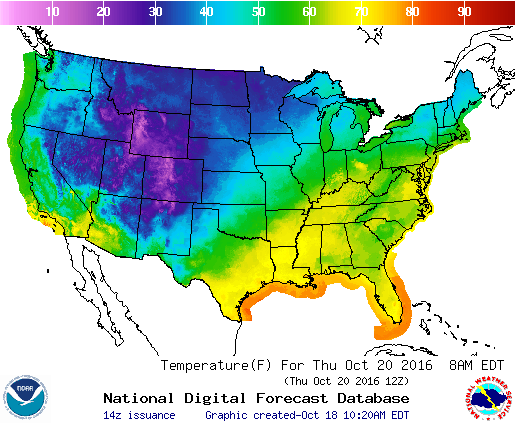 "A strong area of high pressure over the Southeast will help funnel very warm air northward for the first half of the week," said Andy Mussoline, an AccuWeather Meteorologist.

Record-breaking temperatures were already reported on October 16 across the High Plains and the cities of Amarillo, Texas, Roswell, New Mexico, Colorado Springs, Colorado, and Wichita, Kansas, have experienced record warmth for the month of October.

"Highs in the upper 70s and 80s are more typical during the last weeks of summer across the Northeast and mid-Atlantic," explained Mussoline.

The hot and dry weather spell will not be regarded as welcome in New England, as it means the drought conditions will continue. Colder air mass behind the upcoming system will step in for the weekend, and lower the temperatures back to normal, or below.