Remnants of Hurricane "Matthew" slammed Canadian provinces of Nova Scotia and Newfoundland on October 10, 2016 with high wind and heavy rain.

This powerful storm was a result of the remnants of Hurricane "Matthew" meeting up with a system off the coast of the Carolinas. It ripped out trees and power lines, leaving about 50 000 Nova Scotia Power customer without electricity.

About 225 mm (8.85 inches) of rain was recorded in Sydney area on October 10, according to unofficial numbers from Environment Canada.

The rain resulted in flooding that led to street closures, mostly in Sydney and Glace Bay. It's too early to say how much the storms will cost Nova Scotia, but the mayor of Cape Breton Regional Municipality said it will be "millions and millions."

CBRM Mayor Cecil Clarke said for CBC that while the weather has "stretched the resources of the region and municipality. The most important thing is that people are safe, we haven't suffered a loss of life."

After taking its toll on Cape Breton, the weather system moved on to Newfoundland dumping more than 150 mm (5.9 inches) of rain forcing some communities to declare states of emergency. The weather caused accidents and road washouts across the island. 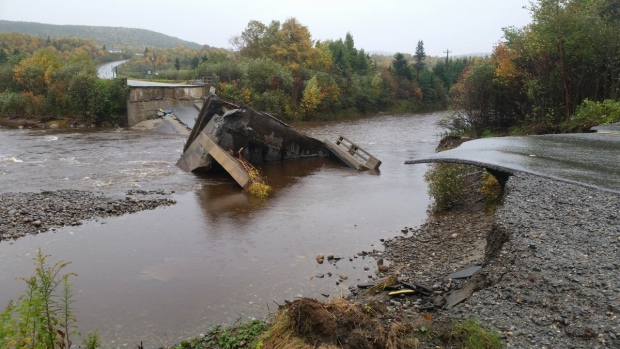 Power is expected to be restored in western and central Nova Scotia by 18:00 local time. Much of the eastern part of Nova Scotia will have to wait until Wednesday, morning.

"It is forecast to stay offshore, but potentially close enough to have some impact, especially to Southern Newfoundland. Matthew is a sobering reminder to not let your guard down even when all the models are offshore."