For the first time, retired U.S. Air Force officers involved in forecasting and analyzing the extreme space weather event of May 23, 1967, collectively and publicly describe how great solar and geomagnetic storm at the height of the Cold War almost led to a disastrous military conflict between the United States and the Soviet Union. Ultimately, this event led the military to recognize space weather as an operational concern and build a stronger space weather forecasting system.

Although listed as one of the most significant events of the last 80 years, the space weather storm of late May 1967 has been of mostly fading academic interest. The storm made its initial mark with a colossal solar radio burst causing radio interference at frequencies between 0.01 – 9.0 GHz and near-simultaneous disruptions of dayside radio communication by intense fluxes of ionizing solar X-rays.

This story develops during the rapid rise of Solar Cycle 20 and the intense Cold War in the latter half of the 20th Century. Authors detail the events of late May 1967 in the intersecting categories of solar-terrestrial interactions and the political-military backdrop of the Cold War. This was one of the "Great Storms" of the 20th century, despite the lack of large geomagnetically-induced currents.

On May 18, 1967, an unusually large group of sunspots with intense magnetic fields appeared in one region of the Sun. On May 23, observatories in New Mexico and Colorado saw a flare visible to the naked eye while a solar radio observatory in Massachusetts reported the Sun was emitting unprecedented levels of radio waves.

A significant worldwide geomagnetic storm was forecast to occur within 36 – 48 hours, according to a bulletin from NORAD’s Solar Forecast Center in Colorado Springs, Colorado on May 23.

As the solar flare event unfolded on May 23, radars at all three Ballistic Missile Early Warning System (BMEWS) sites in the far northern hemisphere were disrupted. The radars, designed to detect incoming Soviet missiles, appeared to be jammed, which, if true, would be considered as an act of war.

The Air Force prepared aircraft for war, thinking the nation’s surveillance radars in polar regions were being jammed by the Soviet Union. Just in time, military space weather forecasters conveyed information about the solar storm’s potential to disrupt radar and radio communications. The planes remained on the ground and the U.S. avoided a potential nuclear weapon exchange with the Soviet Union.

Retired Colonel Arnold L. Snyder, a solar forecaster at NORAD’s Solar Forecast Center, was on duty that day. The tropospheric weather forecaster told him the NORAD Command Post had asked about any solar activity that might be occurring.

“I specifically recall responding with excitement, ‘Yes, half the Sun has blown away,’ and then related the event details in a calmer, more quantitative way,” Snyder said.

Along with the information from the Solar Forecast Center, NORAD learned the three BMEWS sites were in sunlight and could receive radio emissions coming from the Sun. These facts suggested the radars were being ‘jammed’ by the Sun, not the Soviet Union, Snyder said. As solar radio emissions waned, the ‘jamming’ also waned, further suggesting the Sun was to blame, he said. 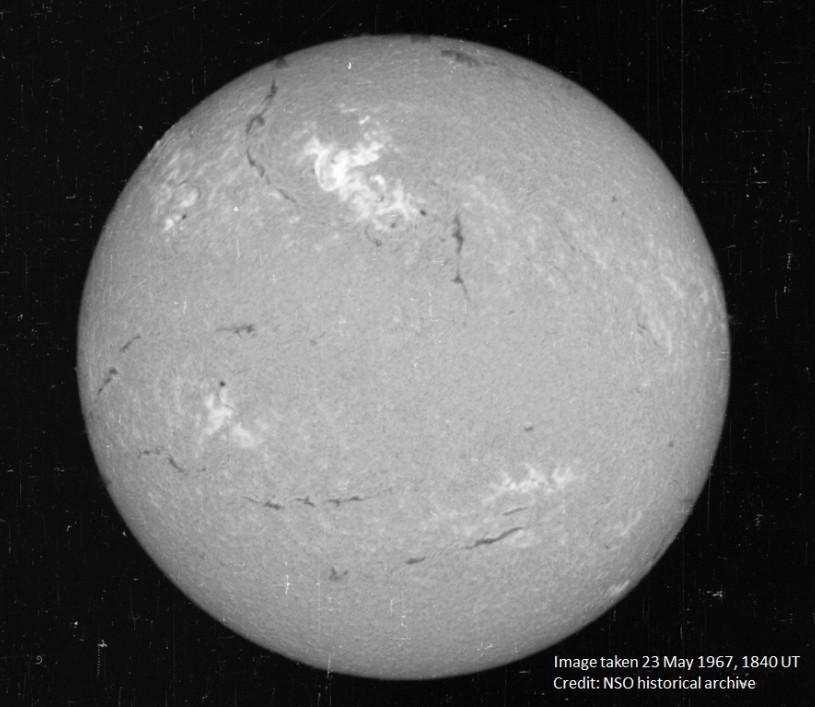 A view of the Sun on May 23, 1967, in a narrow visible wavelength of light called Hydrogen-alpha. The bright region in the top center region of brightness shows the area where the large flare occurred. Credit: National Solar Observatory historical archive.

During most of the 1960s, the Air Force flew continuous alert aircraft laden with nuclear-weapons. But commanders, thinking the BMEWS radars were being jammed by the Russians and unaware of the solar storm underway, put additional forces in a “ready to launch” status, according to the study.

“This is a grave situation,” said Delores Knipp, a space physicist at the University of Colorado in Boulder and lead author of the new study. “But here’s where the story turns: things were going horribly wrong, and then something goes commendably right.”

The Air Force did not launch additional aircraft, and the study authors believe information from the Solar Forecasting Center made it to commanders in time to stop the military action, including a potential deployment of nuclear weapons. Knipp, quoting public documents, noted that information about the solar storm was most likely relayed to the highest levels of government – possibly even President Johnson.

The geomagnetic storm, which began about 40 hours after the solar flare and radio bursts, went on to disrupt U.S. radio communications in almost every conceivable way for almost a week. It was so strong that the Northern Lights, usually only seen in or near the Arctic Circle, were visible as far south as New Mexico. 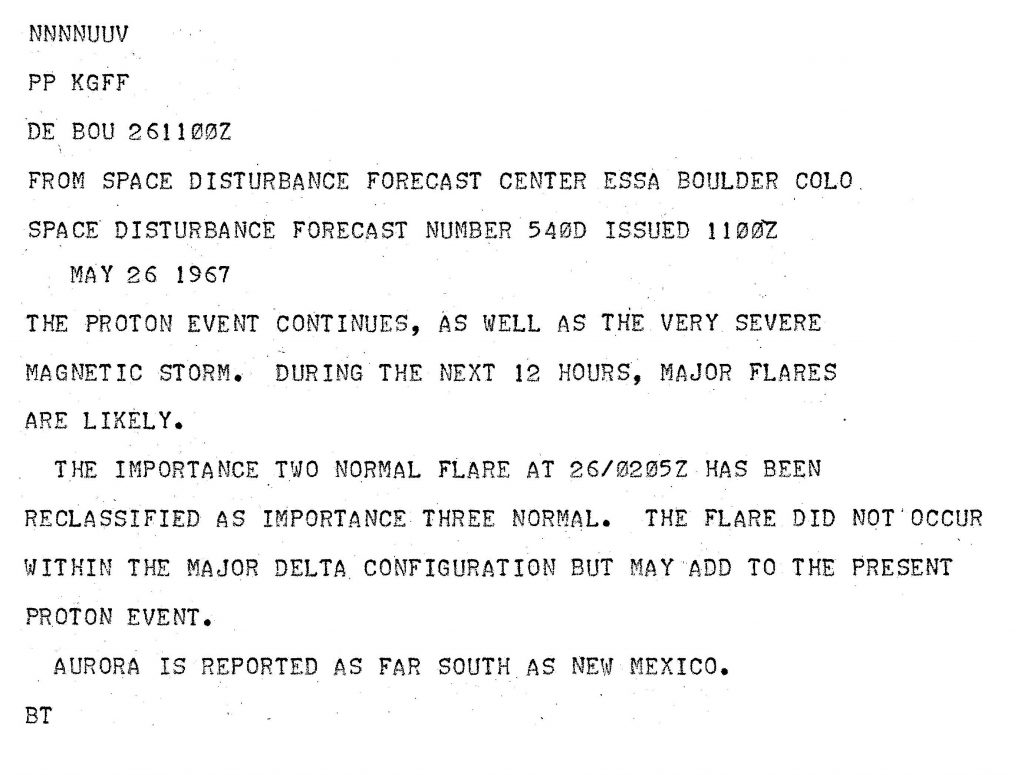 A report of solar activity on May 26 from the Space Disturbance Forecast Center, a civilian forecasting center at the Environmental Science Services Administration (now NOAA). Credit: ESSA/NOAA.

According to Snyder and the study authors, it was the military’s correct diagnosis of the solar storm that prevented the event from becoming a disaster. Ultimately, the storm led the military to recognize space weather as an operational concern and build a stronger space weather forecasting system, he said.

The public is likely unaware that natural disasters could potentially trick contemporary military forces into thinking they are under attack, said Morris Cohen, an electrical engineer and radio scientist at Georgia Institute of Technology in Atlanta who was not involved in the new study.

“I thought it was fascinating from a historical perspective,” he said of the new study.

The May 1967 storm brought about change as a near miss rather than a full-blown catastrophe, according to Cohen.

“Oftentimes, the way things work is something catastrophic happens and then we say, ‘We should do something so it doesn’t happen again,’” he said. “But, in this case, there was just enough preparation done just in time to avert a disastrous result.”