Equatorial sea surface temperatures (SSTs) in the eastern Pacific continued to cool during the past fortnight, the Australian Bureau of Meteorology reported on June 7, 2016.

SSTs more than 1 °C (33.8 °F) warmer than average continue to surround most of the Australian continent, except for the southwest where they are closer to average.

SSTs over large parts of the Indian Ocean remain more than 1 °C above average. 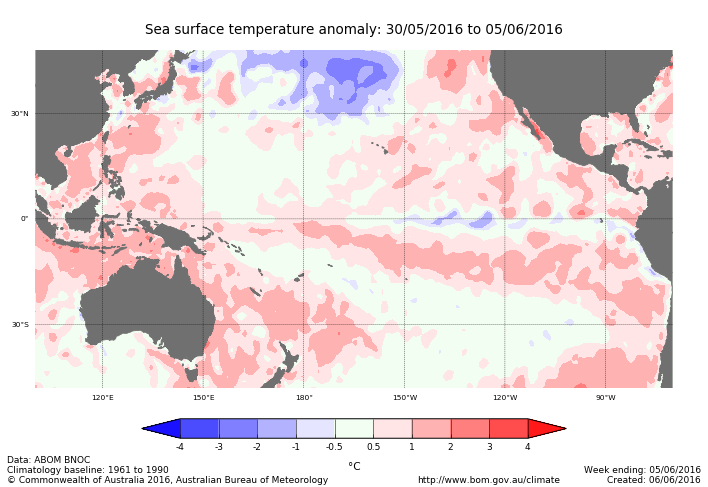 May 2016 SSTs remained more than 1 °C above average over parts of the tropical eastern and central Pacific away from the equator. Along the equator in the eastern and central Pacific, cool anomalies covered the largest area since February 2014. The decrease in SSTs in the tropical central and eastern Pacific was consistent with the decay of El Niño.

SSTs northeast of Australia have increased since April and are again more than 1 °C warmer than average in parts. 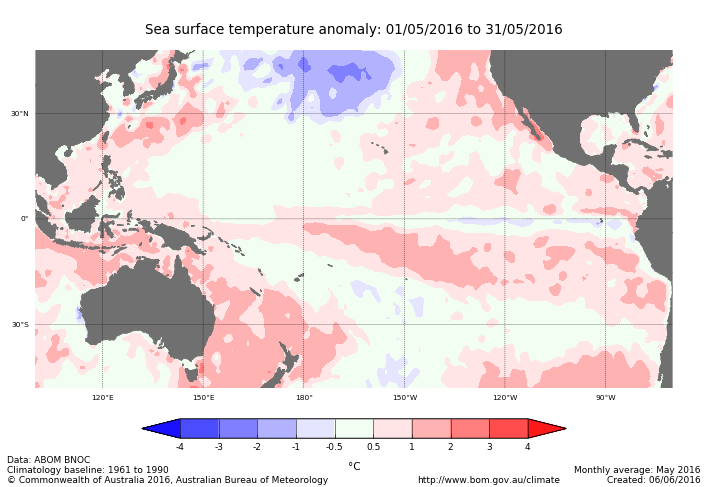 Sub-surface temperature anomalies in the equatorial eastern Pacific continue to expand. The coolest anomalies, more than 4 °C (39.2 °F) below average, lie about 100 m (328 feet) below the surface centered around 155° W.

The four-month sequence of sub-surface temperature anomalies shows a clear cooling trend in the top 100 m of the equatorial Pacific since February. Cool anomalies have spanned the entire equatorial Pacific since April, and May removed almost all remaining warmer than average water from the top 50 m (164 feet). The top 50 m of water west of 150° W is mostly close to average temperature; east of 150° W the water is cooler than average. 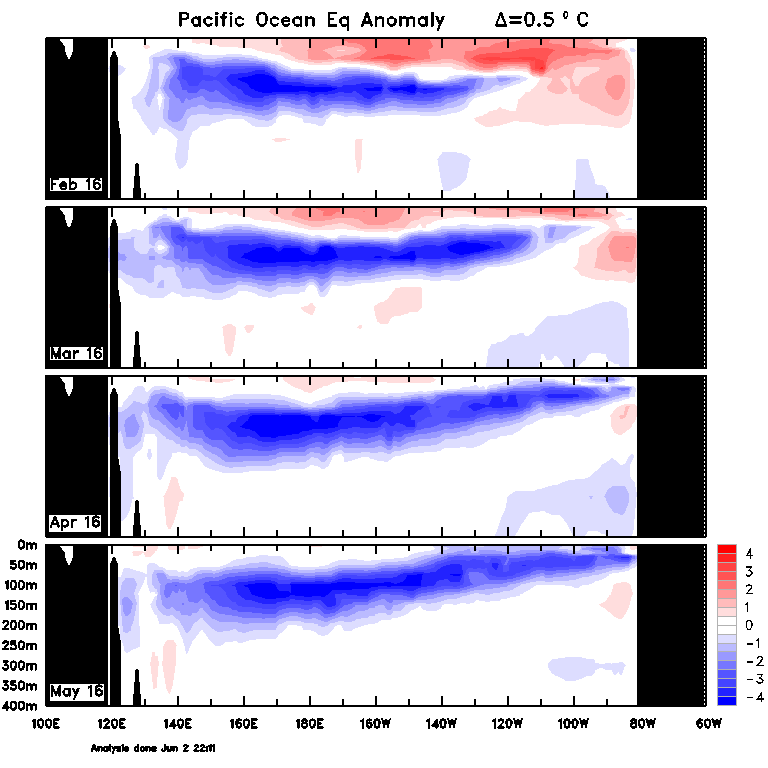 The 30-day Southern Oscillation Index (SOI) to June 5 is +0.3. The SOI value for May was +2.3. Both values are well within the neutral ENSO range. 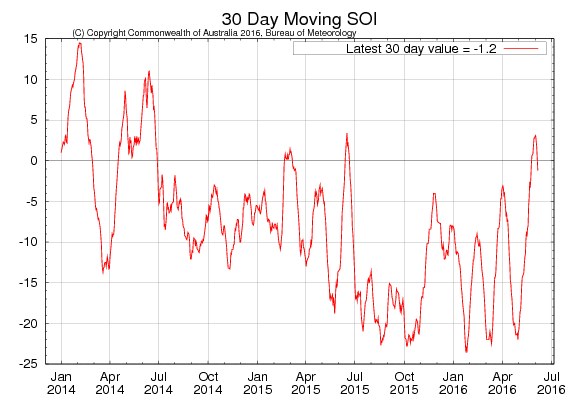 30-day SOI values for the past two years. Credit: BOM

Pacific trade winds near the equator have remained close to normal for the 5 days ending June 5, as they mostly have been since the start of March 2016. The return to near-normal trade winds is consistent with a neutral El Niño–Southern Oscillation (ENSO) state. 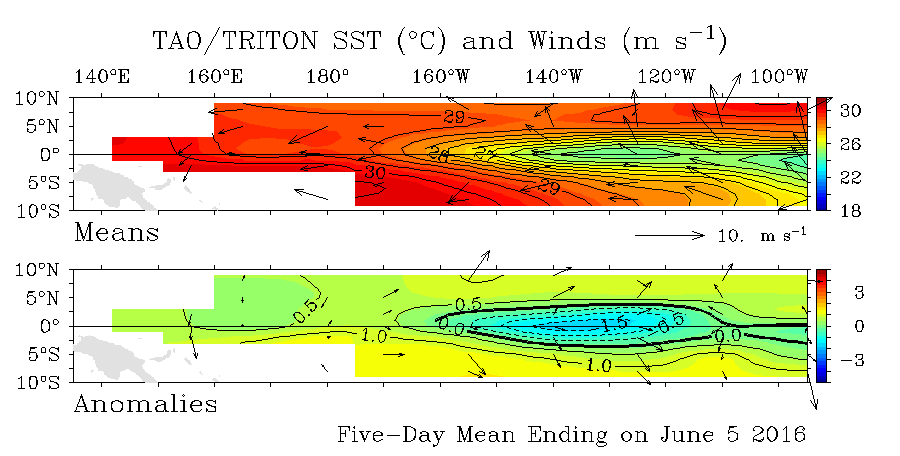 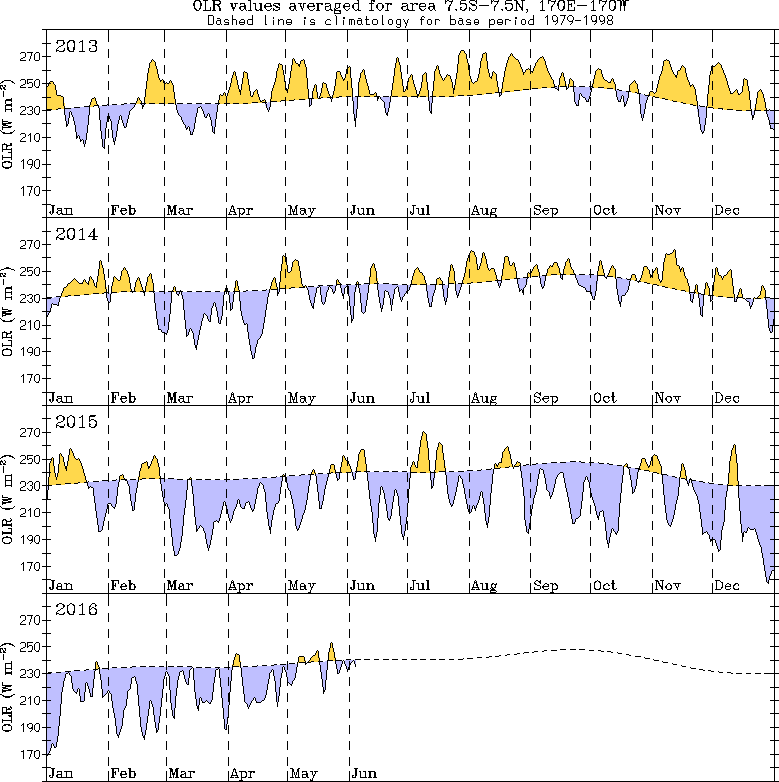 The Bureau's ENSO Outlook remains at La Niña WATCH. This suggests around a 50% likelihood of La Niña forming later in 2016. International climate models indicate the tropical Pacific Ocean will continue to cool, with six of eight models suggesting La Niña is likely to form during the austral winter (June – August).

However, individual model outlooks show a large spread between neutral and La Niña scenarios. At least one model suggests La Niña conditions may be short-lived, returning to neutral by October. 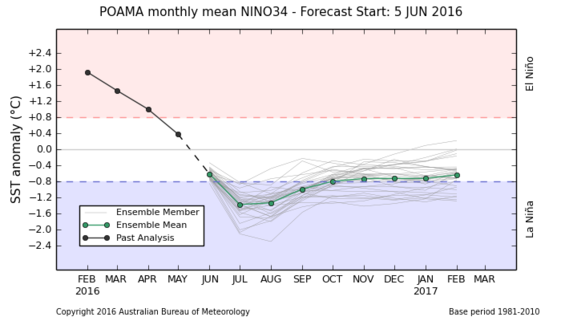 The Indian Ocean Dipole (IOD) is neutral. However, international models monitored by the Bureau indicate a negative IOD event may develop in the coming months. The weekly Dipole Mode Index value to June 5 is -0.65 °C (30.83 °F), dipping to negative IOD levels for the second consecutive week. However, it would take several more weeks of similar IOD index values before a negative IOD would be considered established. 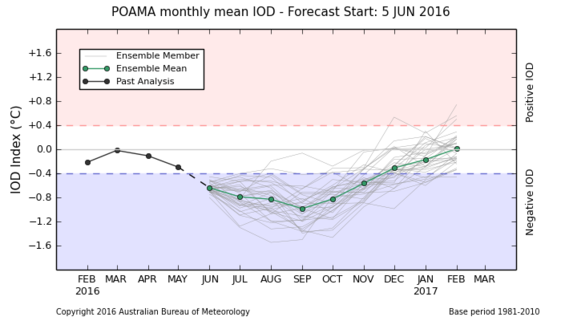