The tropical Pacific Ocean has returned to a neutral El Niño–Southern Oscillation (ENSO) state, the Australian Bureau of Meteorology reports in their May 24 ENSO Wrap-Up.

Equatorial sea surface temperatures (SSTs) in the eastern Pacific have cooled in the past fortnight, supported by much cooler-than-average waters beneath the surface, and are now at neutral levels for the first time since April 2015. 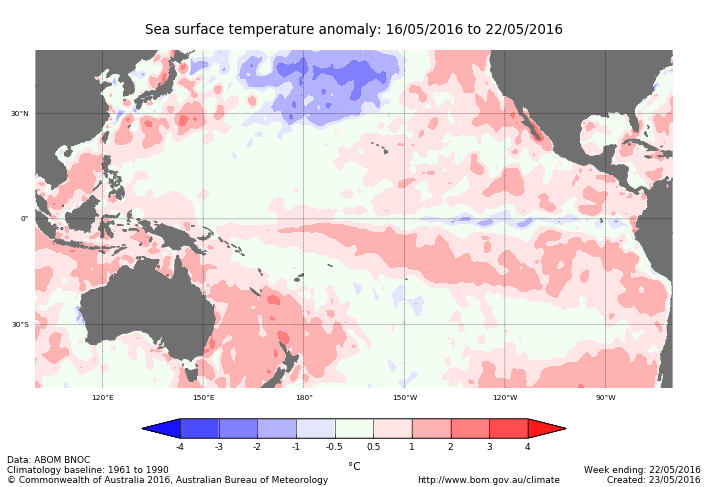 The four-month sequence of sub-surface temperatures anomalies shows the clear cooling trend in the top 100 m (328 feet) of the equatorial Pacific since February. Cool anomalies have spanned the entire equatorial Pacific since April. The first week of May saw the removal of almost all the remaining warmer than average water in the top 50 m (164 feet). Most of the top 50 m of water west of about 150° W is now close to average.

In the atmosphere, indicators such as the trade winds, cloudiness near the Date Line, and the Southern Oscillation Index have also returned to neutral levels. Outlooks suggest little chance of returning to El Niño levels, in which case mid-May will mark the end of the 2015–16 El Niño. 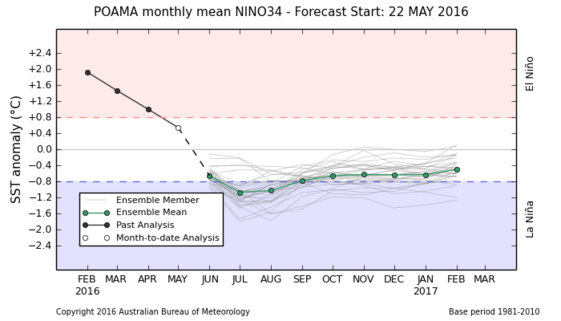 Changes in the tropical Pacific Ocean and atmosphere, combined with current climate model outlooks, suggest the likelihood of La Niña forming later in 2016 is around 50%, meaning the Bureau's ENSO Outlook remains at La Niña WATCH.

The Indian Ocean Dipole (IOD) is neutral and climate model outlooks suggest a negative IOD conditions are possible by June. However, model skill is generally lower at this time of year, and outlooks should be used with caution. Negative IOD events are more likely to occur during La Niña. Sea surface temperatures (SSTs) remain significantly warmer than average across the tropical Indian Ocean.