The decline of the 2015-16 El Niño continues in the tropical Pacific, the Australian Bureau of Meteorology (BOM) reported today. For southern hemisphere winter and spring, climate models suggest neutral and La Niña conditions are equally likely.

Temperatures below the ocean surface have cooled steadily, with only the top 50 metres more than +1 °C warmer than normal. It is likely this is the coolest this top layer of ocean has been since January 2015. Atmospheric indicators reflect such changes in the ocean. For instance, the Southern Oscillation Index (SOI) has returned to weak El Niño levels. However, some indicators, such as cloudiness near the Date Line, have been slower to respond and still show a clear El Niño signal.

International climate models suggest El Niño will continue to weaken during the southern autumn, returning to neutral levels by mid-2016. For winter and spring, climate models suggest neutral and La Niña are equally likely. However, the accuracy of forecasts made at this time of year is lower than those at other times, and therefore some caution should be exercised. 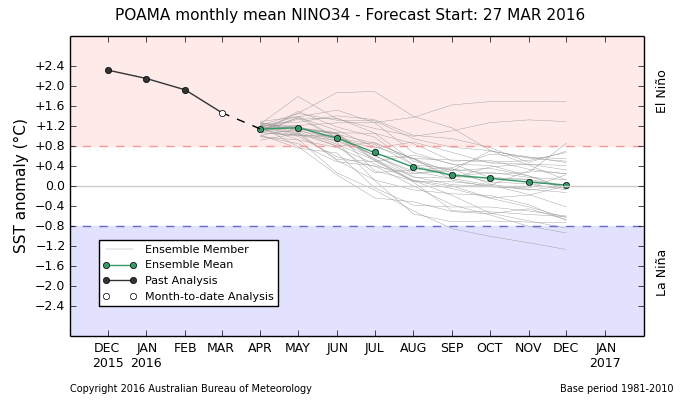 Although the 2015–16 El Niño is weakening, it will continue to influence climate during the southern hemisphere autumn. In Australia, the breakdown of strong El Niño events has historically brought average to above average rainfall to many locations. However, northern Australia typically sees less rainfall than usual.