According to scientists at the National Snow and Ice Data Center (NSICD) and NASA, the 2016 Arctic sea ice appears to have reached a record low wintertime maximum extent for the second year in a row. 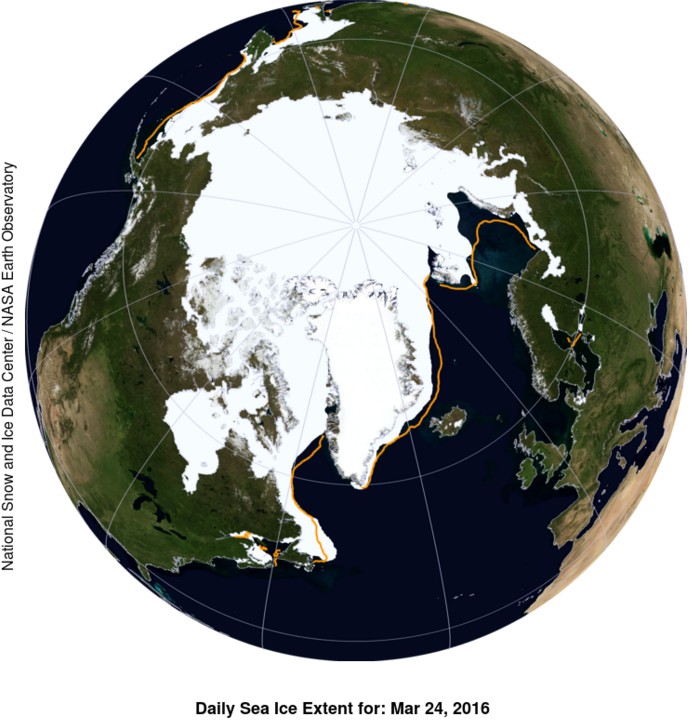 According to NSIDC, sea ice extent was below average throughout the Arctic, except in the Labrador Sea, Baffin Bay, and Hudson Bay. It was especially low in the Barents Sea. As noted by Ingrid Onarheim at the Bjerknes Centre for Climate Research in Bergen, Norway: “A decrease in Barents Sea ice extent for this winter was predicted from the influence of warm Atlantic waters from the Norwegian Sea.”

The cap of frozen seawater floating on top of the Arctic Ocean and its neighboring seas melts during the spring and summer and grows back in the fall and winter months, reaching its maximum yearly extent between February and April.

Scientists are watching extent in this area because it will help them understand how a slower Atlantic Meridional Overturning Circulation (AMOC) may affect Arctic sea ice.

“Some studies suggest that decreased heat flux of warm Atlantic waters could lead to a recovery of all Arctic sea ice in the near future,” said NSIDC senior research scientist Julienne Stroeve. “I think it will have more of a winter impact and could lead to a temporary recovery of winter ice extent in the Barents and Kara seas.”

The September Arctic minimum began drawing attention in 2005 when it first shrank to a record low extent over the period of satellite observations. It broke the record again in 2007, and then again in 2012. The March Arctic maximum has typically received less attention. That changed last year when the maximum extent was the lowest in the satellite record.

“The Arctic is in crisis. Year by year, it’s slipping into a new state, and it’s hard to see how that won’t have an effect on the weather throughout the northern hemisphere,” said Ted Scambos, NSIDC lead scientist. 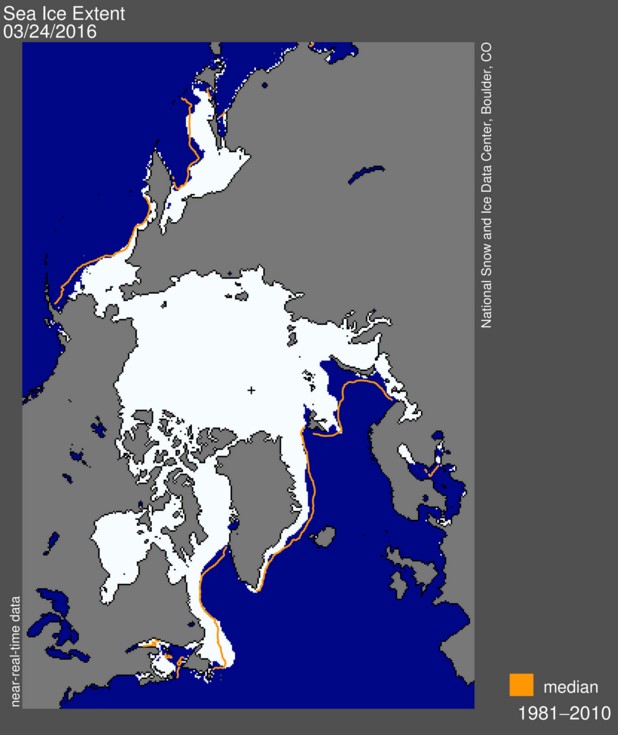 Arctic sea ice plays an important role in maintaining Earth’s temperature – its bright white surface reflects solar energy that the ocean would otherwise absorb. But this effect is more relevant in the summer, when the sun is high in the sky in the Arctic, than in the winter, when the sun doesn’t rise for months within the Arctic Circle. In the winter, the impact of missing sea ice is mostly felt in the atmosphere, said Jennifer Francis, a climate scientist at Rutgers University in New Brunswick, New Jersey.

“In places where sea ice has been lost, those areas of open water will put more heat into the atmosphere because the air is much colder than unfrozen sea water,” Francis said. “As winter sea ice disappears, areas of unusually warm air temperatures in the Arctic will expand. These are also areas of increased evaporation, and the resulting water vapor will contribute to increased cloudiness, which in winter, further warms the surface.”