A team of scientists from Japan, South Korea, and the USA, has identified a new pattern of atmospheric circulation around the Arctic that could drive co-occurrences of heatwaves and large-scale wildfires over the region, particularly in Siberia and subpolar North America. The new climate pattern is named the Circum-Arctic wave (CAW).

In previous years during summer, extremely high temperatures have been a usual occurrence over Europe. Heatwaves and wildfires have often been seen in and around the Arctic, such as Siberia and subpolar North America, including Alaska and Canada, which has caused widespread air pollution. Many people living in these regions have expressed immense concern over the recent unusual climate phenomena.

In a new study, scientists have uncovered a summertime climate pattern in and around the Arctic that could enhance these climate phenomena. Hokkaido University's Assistant Professor Teppei J. Yasunari, the lead author, revealed in the paper the relationships among wildfires, air pollution or aerosols, and climate patterns.

"Wildfires lead to extensive air pollution, primarily in the form of inhalable particulate matter with diameters of 2.5 micrometers or smaller (PM2.5)," said Yasunari. 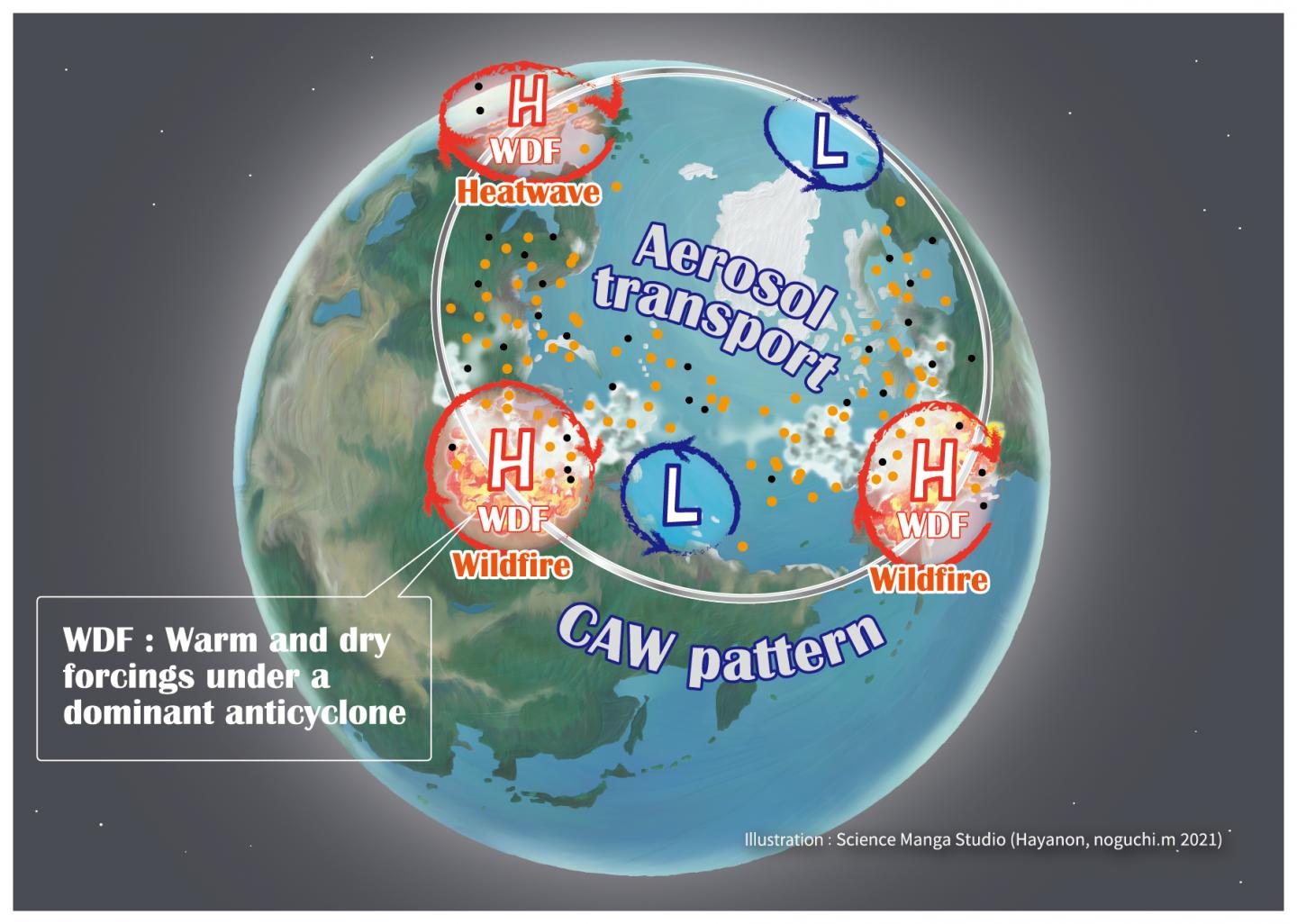 He explained, "Arctic hazes during winter and spring are typical phenomena due to aerosols existing in the Arctic. In our scientific field, it is also known that deposition of light-absorbing aerosols onto snow surfaces can induce the so-called snow darkening effect, contributing to accelerated snow melting. For these reasons, long-term assessments of PM2.5 and aerosols in the Arctic and surrounding regions are required."

For the study, scientists used the MERRA-2 (Modern-Era Retrospective analysis for Research and Applications, version 2) dataset and fire data by satellite focusing on events from 2003 to 2017. The team assessed comprehensive air pollution in the Arctic, looking to clarify the relationships among variations in PM2.5 and aerosols, wildfires, and the relevant climate patterns.

The findings showed that 13 out of the 20 months with the highest PM2.5 in the Arctic during the 15 year period were in summer.

"The elevated PM2.5 levels were highly correlated with relatively higher organic carbon aerosol concentrations, implying active wildfires. We concluded that the summertime wildfires contributed to those months with exceptionally high PM2.5 in the Arctic," said Yasunari.

"In those months, the wildfires likely occurred under extremely warm and dry conditions. Those were due to concomitantly persistent or developed high-pressure systems over Europe, Siberia, and subpolar North America, namely, Alaska, and Canada."

Long-term assessment of severe wildfires and associated air pollution and related climate patterns in and around the Arctic is essential for assessing healthy human life status. To examine the relationships, we analyzed the National Aeronautics and Space Administration (NASA) modern-era retrospective analysis for research and applications, version 2 (MERRA-2). Our investigation based on this state-of-the-art atmospheric reanalysis data reveals that 13 out of the 20 months with the highest PM2.5 (corresponding to the highly elevated organic carbon in the particulate organic matter [POM] form) monthly mean mass concentration over the Arctic for 2003–2017 were all in summer (July and August), during which POM of $ \geqslant $0.5 μg m−3 and PM2.5 were positively correlated. This correlation suggests that high PM2.5 in the Arctic is linked to large wildfire contributions and characterized by significant anticyclonic anomalies (i.e. clockwise atmospheric circulation) with anomalous surface warmth and drier conditions over Siberia and subpolar North America, in addition to Europe. A similar climate pattern was also identified through an independent regression analysis for the July and August mean data between the same atmospheric variables and the sign-reversed Scandinavian pattern index. We named this pattern of recent atmospheric circulation anomalies the circum-Arctic wave (CAW) pattern as a manifestation of eastward group-velocity propagation of stationary Rossby waves (i.e. large-scale atmospheric waves). The CAW induces concomitant development of warm anticyclonic anomalies over Europe, Siberia, Alaska, and Canada, as observed in late June 2019. Surprisingly, the extended regression analysis of the 1980–2017 period revealed that the CAW pattern was not prominent before 2003. Understanding the CAW pattern under future climate change and global warming would lead to better prediction of co-occurrences of European heatwaves and large-scale wildfires with air pollution over Siberia, Alaska, and Canada in and around the Arctic in summer.