Since October, Arctic ice extent has been more than two standard deviations lower than the long-term average. At the same time, Antarctic sea ice extent quickly declined in November, also setting a record low for the month and tracking more than two standard deviations below average during the entire month. For the globe as a whole, sea ice cover was exceptionally low, the Center said. 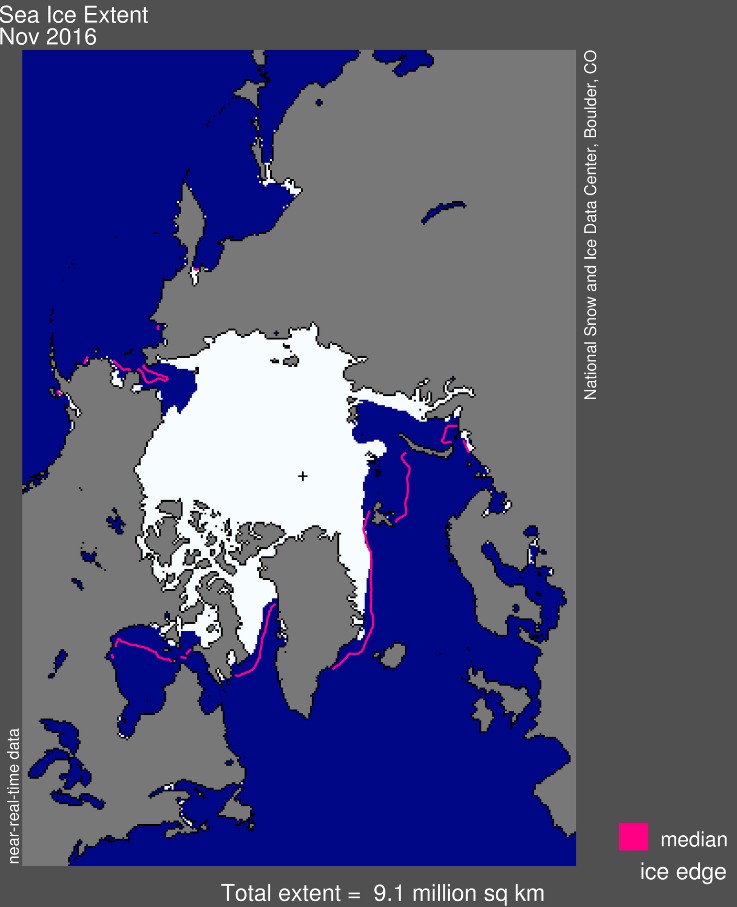 At this time of year, air temperatures near the surface of the Arctic Ocean are generally well below freezing, but this year has seen exceptional warmth. The overall rate of ice growth this November was 88 000 km2 (34 000 mi2) per day, a bit faster than the long-term average of 69 600 km2 (26 900 mi2) per day. However, for a brief period in the middle the month, total extent actually decreased by 50 000 km2, or 19 300 mi2 – an almost unprecedented occurrence for November over the period of satellite observations. A less pronounced and brief retreat of 14 000 km2 (5 400 mi2) occurred in 2013.

Ice growth during November as a whole occurred primarily within the Beaufort, Chukchi and East Siberian Seas, as well as within Baffin Bay. Ice extent slightly retreated in the Barents Sea for the month. Compared to the previous record low for the month set in 2006, sea ice was less extensive in the Kara, Barents, East Greenland, and Chukchi Seas, and more extensive in Baffin Bay this year.

Continuing the warm Arctic pattern seen in October, November air temperatures were far above average over the Arctic Ocean and Canada. Air temperatures at the 925 hPa level (about 2 500 feet above sea level) were above the 1981 to 2010 average over the entire Arctic Ocean and, locally up to 10 °C (18 °F) above average near the North Pole. This is in sharp contrast to northern Eurasia, where temperatures were as much as 4 to 8 °C (7 to 14 °F) below average (Figure 2b). Record snow events were reported in Sweden and across Siberia early in the month. 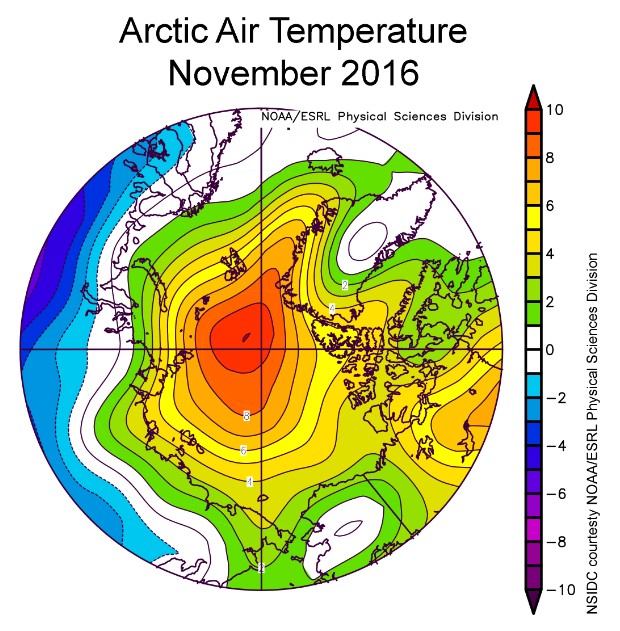 Figure 2b. This plot shows air temperature difference from average in the Arctic for November 2016. Air temperatures at the 925 hPa (approximately 2 500 feet) level in the atmosphere were above the 1981 to 2010 average over the entire Arctic Ocean and, locally up to 10 ° C (18 °F) above average near the North Pole. This is in sharp contrast to northern Eurasia, where temperatures were up to 4 to 8 °C (7 to 14 °F) below average.  Credit: NSIDC courtesy NOAA/ESRL Physical Sciences Division

In autumn and winter, the typical cyclone path is from Iceland, across the Norwegian Sea and into the Barents Sea. This November, an unusual jet stream pattern set up, and storms instead tended to enter the Arctic Ocean through Fram Strait (between Svalbard and Greenland). This set up a pattern of southerly wind in Fram Strait, the Eurasian Arctic and the Barents Sea and accounts for some of the unusual warmth over the Arctic Ocean. The wind pattern also helped push the ice northwards and helps to explain why sea ice in the Barents Sea retreated during November. 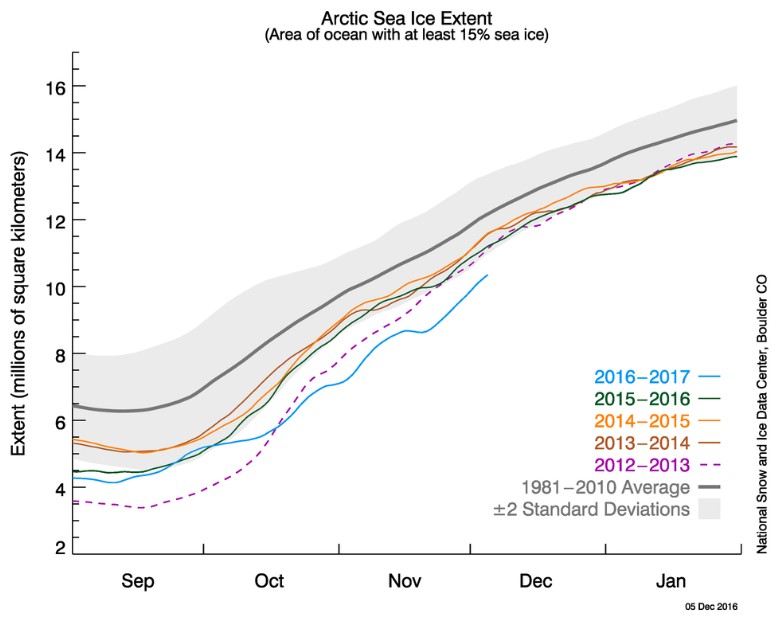 Figure 2a. The graph above shows daily Arctic sea ice extent as of December 5, 2016, along with daily ice extent data for four previous years. 2016 is shown in blue, 2015 in green, 2014 in orange, 2013 in brown, and 2012 in purple. The 1981 to 2010 average is in dark gray. The gray area around the average line shows the two standard deviation range of the data. Sea Ice Index data.  Credit: National Snow and Ice Data Center 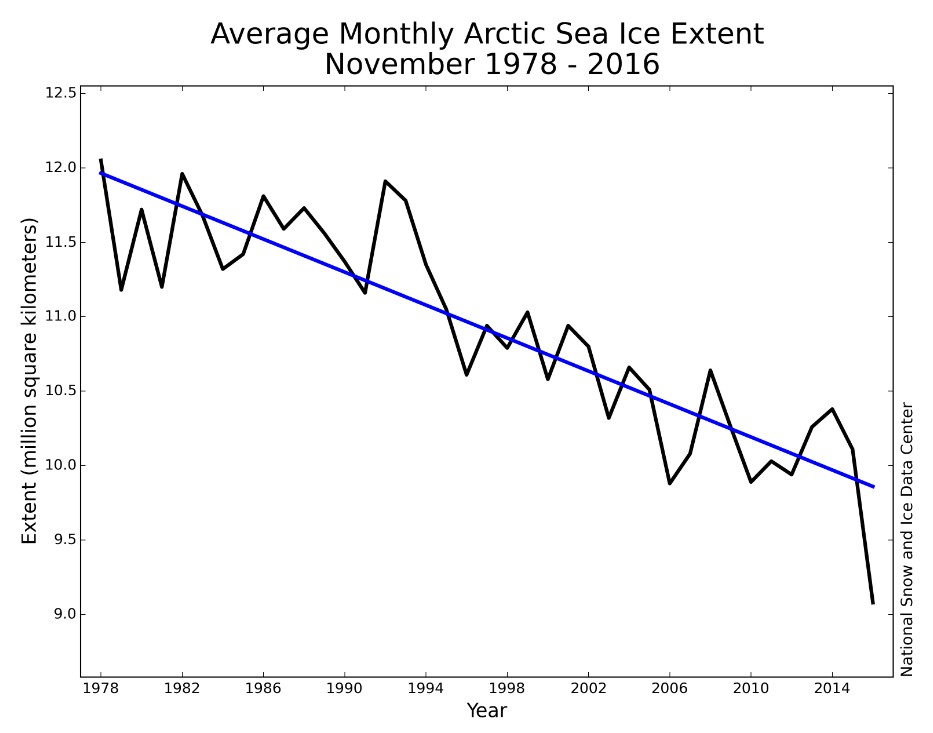 Figure 3. Monthly November ice extent for 1979 to 2016 shows a decline of 5.0% per decade. Credit: National Snow and Ice Data Center 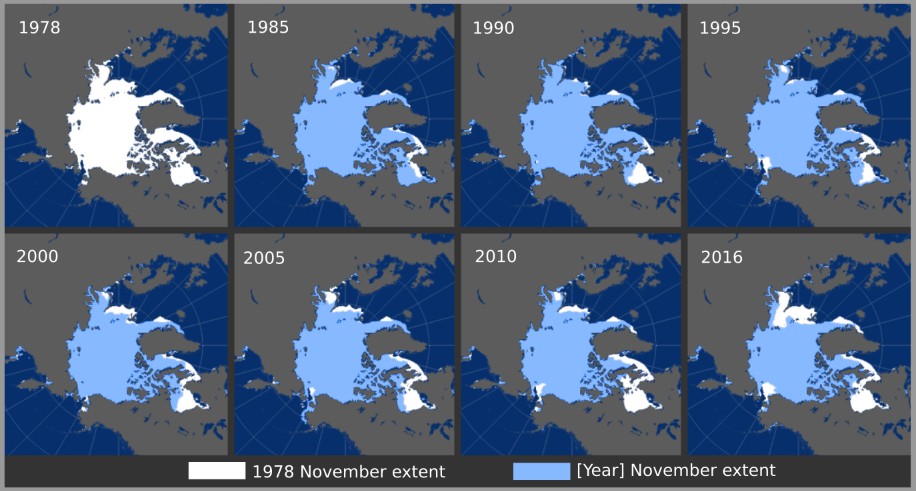