A recently performed temperature analysis shows the North Pole is over 20 °C (36 °F) warmer than over the last decades. At the same time, unprecedented frigid temperatures have been observed in parts of Asia, in a highly unusual temperature anomaly dipole.

The analysis conducted by Sean Birkel, a research assistant professor at the University of Maine's Climate Change Institute, also shows the entire Arctic region was about 7.2 °C (13 °F) warmer on November 18, 2016 than during the past few years.

The calculation was performed by comparing the current temperatures with values from a baseline period between 1979 and 2000. Professor Birkel regularly updated the temperature difference for the Arctic region on ClimateReanalyzer.org in the hope of raising the awareness about the Arctic heating. 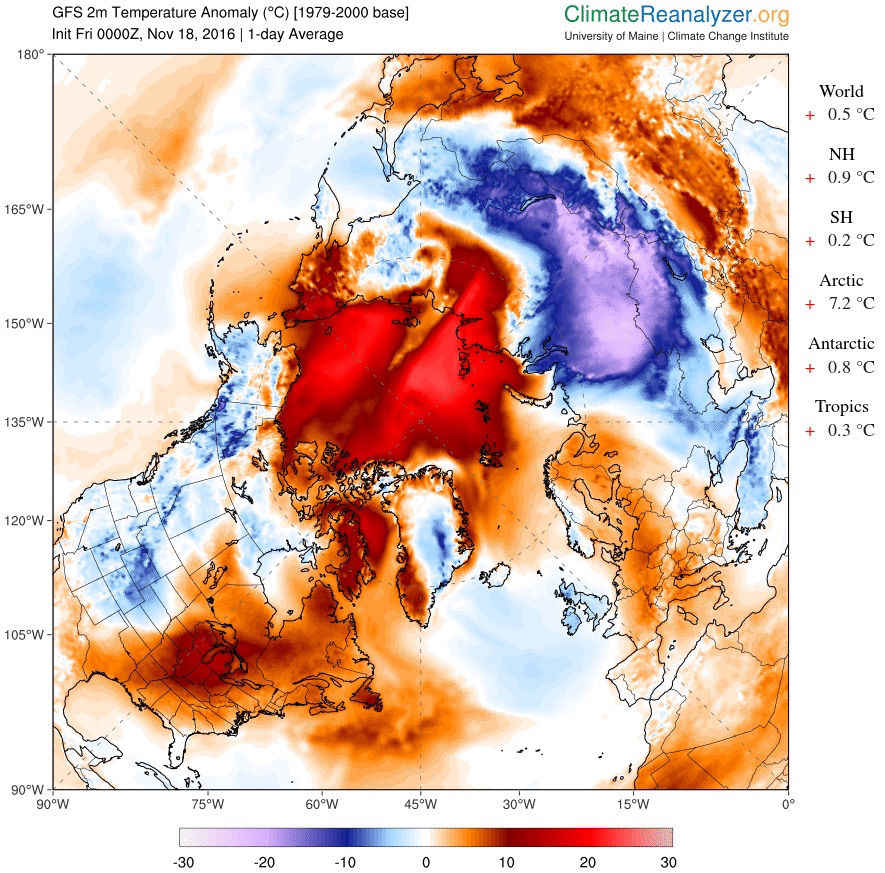 A heat map indicating much hotter (red) and colder (blue) the Earth was on November 18, 2016, in comparison with the same days in a period between 1979 and 2000. Image credit: ClimateReanalyzer.org/Climate Change Institute/The University of Maine 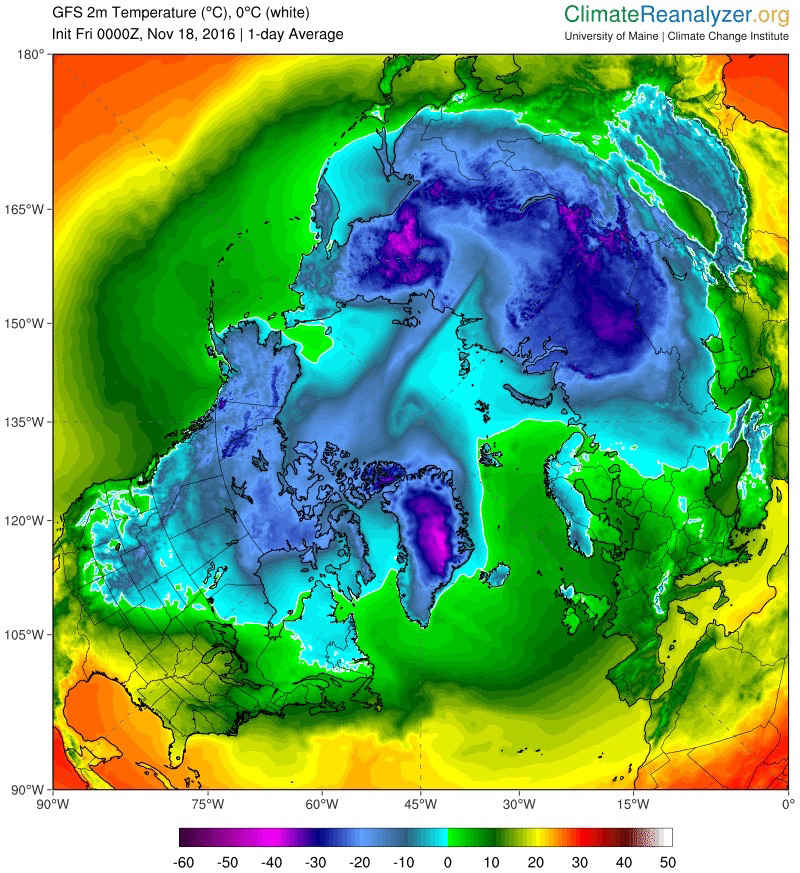 Results are not surprising when taking into the account that the Arctic recorded record low sea-ice amount and unprecedented temperatures throughout 2016.

"The Arctic has been in uncharted territory pretty much all year long, ever since last fall," said Jennifer Francis, a research professor in the Department of Marine and Coastal Sciences at Rutgers University, New Jersey.

According to the International Arctic Buoy Programme, air temperatures collected from five different buoys near the North Pole, on November 15, showed values between 0 and 1.2°C (32 and 34.16°F).

"Warm air has flooded the Arctic from both the Pacific and Atlantic in response to a large North Pacific Low and anomalous Eurasian ridge," said Zack Labe, a Ph.D. student and climate researcher at the University of California, Irvine.

Such conditions have caused the mean Arctic temperatures to rise since mid-October into mid-November, instead of falling as would usually be anticipated. The higher sea surface temperatures have prolonged the ice-free period in parts of the Beaufort, Kara, and Barents Seas.

The National Snow and Ice Data Center reported the Arctic sea ice coverage is at its record low over the last 37 years, covering almost 2 million square kilometers (0.78 square million miles) less than the daily mean from the period between 1981 and 2010. This means an area larger than Alaska is missing its ice coverage on Arctic.

According to the scientists, the high temperatures are induced by the melting of Arctic ice sheets, as the exposed ocean surfaces absorb the incoming heat which would instead be reflected back into space by the ice sheets. The warming water releases water vapor which keeps the heat in the planet's atmosphere. Also, the consequently forming clouds cause even more heat to get trapped inside the atmosphere.

"The loss of the sea ice, the increased melting of the Greenland Ice Sheet, the thawing of permafrost, the changes in the weather patterns, the rising sea level – it's all consistent with our expectations for the response of the climate system to increases in greenhouse gasses. It's been totally expected. What's not expected is how fast it's been happening," explained Francis.

The Arctic conditions are, in return, bringing extremely cold winter conditions to the central Asia, as the jet stream swings northward in the area north of Scandinavia and western Russia.

The increasing temperatures exacerbate the conditions, as the intensify the jet streams' tilt causes it to dip farther to the south over the central Asia.

"That allows the cold air from the Arctic to plunge farther south, and it tends to create snowfall earlier in the fall, which is exactly what we've seen this year. In fact, it's been a record amount of snowfall in northern Siberia. And when you get snow on the ground there, that makes it colder, and that intensifies the southward dip even more," added Francis.

The alarming conditions which, although expected, appear to unfold on at a much faster pace than anticipated will probably impact the animals resident to the affected areas, as they depend on the sea ice for their survival. Research also suggests, the rising sea surface temperatures cause a change in the type of plankton present in the water columns, which could potentially affect the entire food chain.

The North Pole is a shocking 36 degrees hotter than it should be. https://t.co/mYJ14d8Fqf pic.twitter.com/vGHFwWXH1A

Unprecedentedly cold conditions have set in across parts of Asia, over 1 609 km (1 000 miles) south of the North Pole. Numerous cities in Russia reported temperatures at or below -40 °C (-40 °F) on November 15. Such temperatures are not unusual in the region of eastern Siberia, although they are not customary in central Russia and Kazakhstan.

According to experts, the trapping of the upper-level low south of the Eurasian ridge in combination with the greatest areal extent of early-season Siberian snow cover over the last 18 years, is the leading cause of the phenomenon.

"What resulted was one of the most bizarre, upside down temperature anomaly dipoles I've witnessed in my career," concluded Jonathan Erdman, a senior meteorologist at weather.com.