The Apex Telescope Large Area Survey of the Galaxy (ATLASGAL) has been completed, ESO announced on February 24, 2016. The survey resulted in an impressive new image of the Milky Way, showing the full area of the Galactic Plane visible from the southern hemisphere at submillimeter wavelengths, between infrared light and radio waves. The map is the sharpest made so far.

The Atacama Pathfinder EXperiment telescope (APEX) is situated on the Chajnantor Plateau, at 5 100 m (16 732.3 feet) above the sea level in Atacama region, Chile. The ATLASGAL survey relied on the sensitive and unique features of the telescope, capable of studying the cold areas of Universe, only a few tens of degrees above the absolute zero.

This video takes a close look at a new image of the Milky Way released to mark the completion of the APEX Telescope Large Area Survey of the Galaxy (ATLASGAL). Video credit: ESO/APEX/ATLASGAL consortium/NASA/GLIMPSE consortium/ESA/Planck. Music: Johan B. Monell

The LArge BOIometer Camera (LABOCA), one such instrument, was used to measure the incoming radiation by registering the slight rise in temperature it causes on its detectors. The device is capable of detecting emission from the cold dark dust bands obscuring the stellar light. The survey has mapped to map the distribution of dense cold gas along the plane of the Milky Way galaxy, including the area of star formation in the southern Milky Way.

The maps cover the sky area 140° long and 3° wide, four times bigger and of much higher quality than the first ATLASGAL release. The new edition complements observations from ESA's Planck and Herschel satellites. The combination of observations from Planck and APEX enabled the scientists to detect emission spread over a larger area of sky and to estimate the fraction of dense gas in the inner Galaxy. The data from ATLASGAL have also been used to create a complete census of cold and massive clouds in the region where new stars are being formed.

The southern plane of the Milky Way from the ATLASGAL survey. Image credit: ESO/APEX/ATLASGAL consortium/NASA/GLIMPSE consortium/ESA/Planck 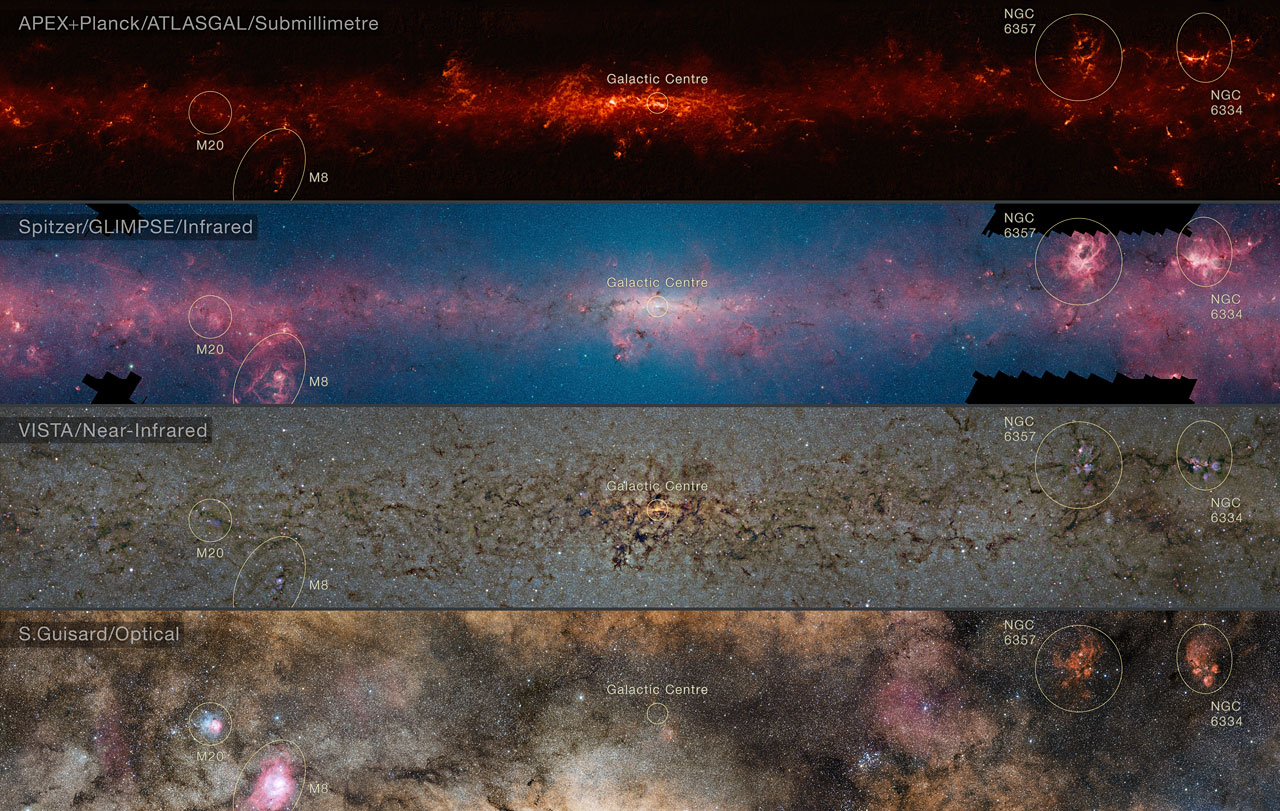 This comparison shows the central regions of the Milky Way observed at different wavelengths. The top panel shows compact sources of submillimetre radiation detected by APEX as part of the ATLASGAL survey, combined with complementary data from ESA’s Planck satellite, to capture more extended features. The second panel shows the same region as seen in shorter, infrared, wavelengths by the NASA Spitzer Space Telescope. The third panel shows the same part of the sky again at even shorter wavelengths, the near-infrared, as seen by ESO’s VISTA infrared survey telescope at the Paranal Observatory in Chile. Regions appearing as dark dust tendrils here show up brightly in the ATLASGAL view. Finally, the bottom picture shows the more familiar view in visible light, where most of the more distant structures are hidden from view. The significance of the colours varies from image to image, and they cannot be directly compared. Image credit: ESO/ATLASGAL consortium/NASA/GLIMPSE consortium/VVV Survey/ESA/Planck/D. Minniti/S. Guisard. Acknowledgement: Ignacio Toledo, Martin Kornmesser

"ATLASGAL provides exciting insights into where the next generation of high-mass stars and clusters form. By combining these with observations from Planck, we can now obtain a link to the large-scale structures of giant molecular clouds," said Timea Csengeri from the Max Planck Institute for Radio Astronomy (MPIfR), Bonn, Germany, leader of the work of combining the APEX and Planck data.

"ATLASGAL has allowed us to have a new and transformational look at the dense interstellar medium of our own galaxy, the Milky Way. The new release of the full survey opens up the possibility to mine this marvellous dataset for new discoveries. Many teams of scientists are already using the ATLASGAL data to plan for detailed ALMA follow-up," concluded Leonardo Testi from ESO, a member of the ATLASGAL team and the European Project Scientist for the ALMA project.

The ATLASGAL survey is the single most successful APEX large programme with nearly 70 associated science papers already published, and its legacy will expand much further with all the reduced data products now available to the full astronomical community.