The consequences of a rare hurricane hit in Yemen on November 3, 2015 are still felt today. Tropical Cyclone "Chapala" caused flash floods across the port of Mukalla, and regions of the Hadramout province, which damaged roads, houses and sewer systems. Recent Dengue fever outbreak is directly connected to un-remediated effects of cyclone hit.

The Mukalla city is still submerged in sewage swamps producing harmful fumes that residents are forced to inhale. The situation is greatly contributing to hazardous health conditions in the area aggravated by the second outbreak of Dengue fever during mid-November 2015.

City's residents and local officials have complained about not receiving proper aid in recovering from the consequences of Cyclone "Chapala". According to the province's assistant undersecretary for technical affairs, Mohammed al-Amoudi, numerous humanitarian organizations have been reluctant to provide the necessary support due to the current political situation in the area.

Dengue fever outbreak occurred only a few months after the residents recovered from a disease outbreak earlier in the year.

"I have no other choice but to keep driving, as no one would feed my children if I stayed at home," said Abdullah, a middle-aged bus driver in Mukalla, who travels to work every day with a severe cough and sore eyes after suffering exposure to sewage on the streets of the city. To minimize breathing in the fumes, Abdullah said he presses a piece of cloth over his mouth and nose when driving by the waste. 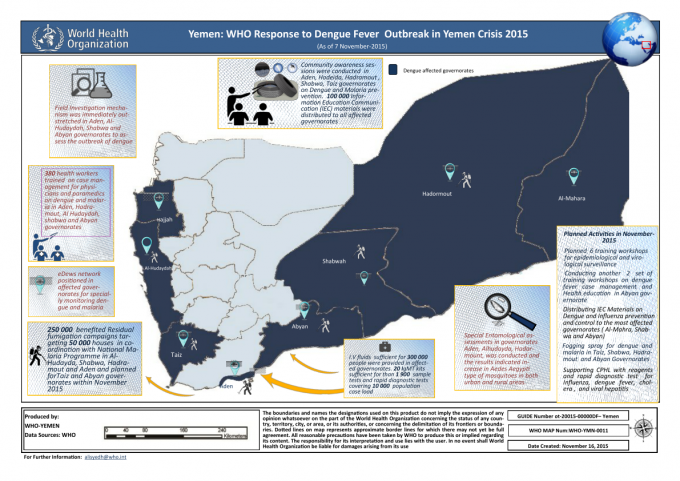 According to Riad al-Juriri, head of the provincial office of the minister of health in Mukalla, 1 040 suspected cases of dengue fever and 280 confirmed cases have been reported so far. Seven people have died. The spread of the disease is "due to large swamps, damaged sewer systems and accumulation of garbage", Juriri said.

Local charities have provided generous aid in the health sector, however, a substantial amount of funding is required to repair the damage.

"We seek to rebuild the destroyed roads and bridges. Many farmers whose lands were washed away want to bring back their sources of livelihood," Amoudi said.

More recently, some international aid organization have decided to provide help to affected region, and a worker from Doctors Without Borders (MSF) visited the city to meet with the authorities.

"MSF's aid shipment was very helpful and met our demands since their worker directly experienced our problem. We are still in need of a large quality of pesticides, spraying machines and some laboratory supplies," Juriri said.