The government of Yemen has declared the port city of Aden a disaster area on April 22, 2020, following devastating flash floods caused by up to 125 mm (5 inches) of rain in just 24 hours. On average, the city receives just about 5 mm (0.19 inches) of rain in April and about 37 mm (1.4 inches) in an entire year. Floodwaters destroyed buildings and shelters, affecting thousands of people and killing at least 10.

Streets turned to raging rivers as waters swept away vehicles, leaving significant damage to properties and infrastructures. It also affected temporary shelters of families already suffering after being displaced by the conflict in the country.

Nearly 1 000 households were impacted in the governorate of Sana and more than 5 000 in Marib. Water wells were contaminated, with sewages posing threats for an increase of cholera. Yemen holds the highest record of cholera cases in the world, with about a million infected and more than 2 000 fatalities since 2017.

Residents fear of epidemic outbreak during the rainy season, amid the ongoing civil war that has damaged more than half of the country's health facilities and disabled most of the sources of clean water and sanitation. 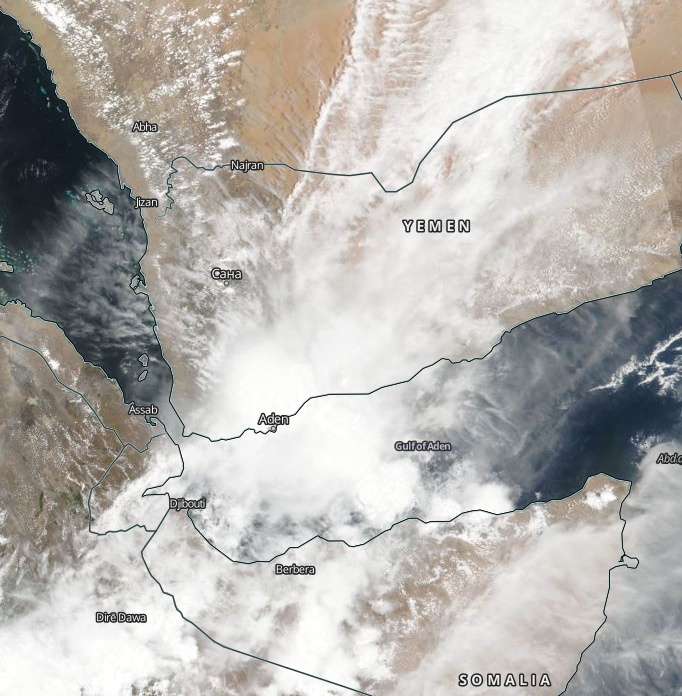 At least 10 fatalities were reported, while 30 others sustained injuries in different neighborhoods of Aden. An official stated that two of the casualties were in the Al Mualla district, and five others were in Sirah.

Among the victims were three children from the same family who died when their house collapsed in the district of Crater, the official added. Injured residents were taken to nearby medical centers for treatment.

Heavy rains & flooding have affected displaced Yemenis across #Yemen – from Sana’a, to Marib, to Aden.

Many families lost their shelter, and everything they own.

UNHCR is providing emergency response to hundreds of families with tents, mattresses and blankets. pic.twitter.com/7oiIwZmhFD

Aden is sinking.
Our thoughts and prayers for the people of #Aden, #Yemen. pic.twitter.com/nW0DtViMQk

Will we sleep today in the street? A woman of two children in #Aden is crying for help after her house is swept away in flood . #YemenCantWait #Yemen pic.twitter.com/pXVDP2Pusb

Video:- The devastating floods in Aden, Yemen.
We hope and pray #Covid19 will be the only disaster. @HarunMaruf. pic.twitter.com/F0TPyKjClU

Aden sinking due 2torrential rian as over 15 reportedly casualties & yet there is no official response by authorities or Hadi gov.
The situation in #Yemen is critical & doesn't afford more disasters unless there rescue operations + sheltering we going to see horrific catastrophe pic.twitter.com/NdZ3q0cJj1

This was the second major flooding in Aden in almost a month. On March 25, up to 75 mm (3 inches) of rain fell in the city, leading to flash floods that killed two and injured four.

Heavy rains on April 13, 2020, caused widespread and severe flooding in Sana'a, resulting in massive damage to properties. Flash flooding in the district of Al-Sabeen killed two people after they were swept away by raging waters. At least one house collapsed, while dozens of others sustained damages, prompting residents to evacuate. Videos posted by locals on social media show widespread inundations cutting off roads and stranding individuals.