The South Coast Region was hit the hardest on January 4. 117 mm (4.6 inches) of rainfall was recorded in Bateman's Bay and 155 mm (6.1 inches) in Moruya. The observed amounts of precipitation have been reported to set a record for the heaviest January rainfall in the area since 1999.

Since the downpours began on January 3, 34 mm (1.3 inches) was measured in Sydney, with rainfall amounts rising to 45.6 mm (1.8 inches) in the city's west Horsley Park.

Another January record was broken as 109 mm (4.3 inches) of rainfall fell in Nimmitabel over the last 24 hours. At the same time, the Central Coast of the state reported between 50 and 70 mm (1.9 and 2.7 inches) of precipitation. 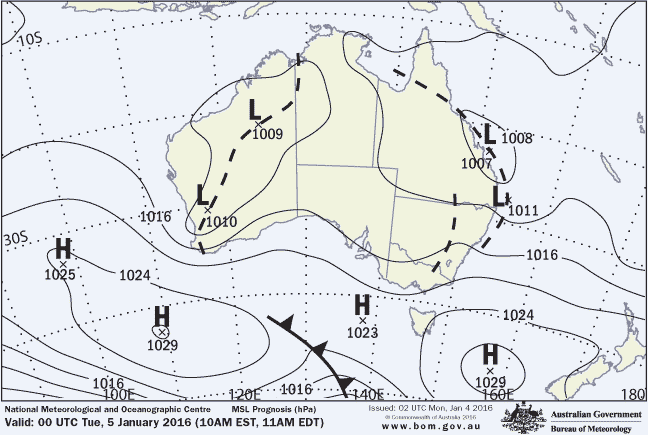 BOM reported a strong high pressure system over the southern Tasman Sea and a broad trough over Queensland are combining to produce a humid easterly airflow and widespread rain over eastern NSW. A trough has been forecast to deepen along the northern NSW coast during January 5 under the influence of an approaching upper level feature that will produce heavy rainfall in the Hunter and Mid North Coast districts.

Many famous beaches across the state have been closed due to dangerous surf conditions. Tamarama area also reported high pollution levels caused by heavy rainfalls and overflowing storm water. 1 person died in flood-related incident near Seymour on January 4, according to media reports.

Widespread 24 hour accumulation rain totals between 50 and 100 mm (1.9 and 3.9 inches) are expected in parts of the Mid North Coast and Hunter districts, especially between Newcastle and Port Macquarie, during January 5. Precipitation amounts could rise between 100 and 200 mm (3.9 and 7.9 inches) or higher in locally isolated areas.

The State Emergency Service advised people to remain alert, avoid driving, riding or walking through flood water, keep clear of creeks and storm drains and seek refuge in the highest available place and ring rescue service should they find themselves trapped by flash flooding.