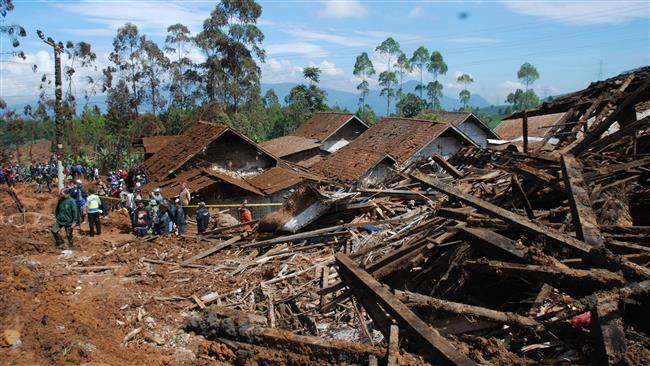 A landslide caused by heavy rainfall hit a village in western Indonesia on Thursday, December 3, burying the local villagers. This is the second deadly landslip at this area for this week.

Twenty huts were brought under the rubble up to 5 meters (16 feet) high after mounds of earth and rocks surged down a hillside in Bengkulu, a province in the southwest of Sumatra island, Indonesia burying 18 people. Three have been retrieved so far and the rescuers are searching for remaining 15, that officially remain missing.

"I think there were no survivors because earth piled up as high as five metes above the hut," the head of Lebong Tandai Village, Munta Alimun said.

According to disaster agency spokesman Sutopo Purwo Nugroho efforts to recover the victims' bodies had been hampered by difficult access to the engulfed area.

This accident was second this week that came after a landslide in Pematang Siantar town in North Sumatra province on Tuesday, December 1, damaging 57 houses, killing 2 people and injuring nine.

This areas are hilly and known for gold mining. Indonesia is composed of a chain of 17 000 islands and is prone to flooding. Seasonal rains and high tides cause frequent landslides and floods which peaks between December and February. Many of the Indonesia's 250 million people live in mountainous areas or fertile, flood-prone plains near rivers.

Featured Image: Rescuers search for buried victims in a village hit by landslide in Indonesia. Photo by presstv.ir