Beginning on October 22, 2015, a swarm of mostly small earthquakes occurred about 10 km (6 miles) NW of the towns of Crescent and Gilchrist, Oregon. Through the morning of October 23, the Pacific Northwest Seismic Network (PNSN) located 29 events, and a number of additional events, too small to locate, close to a volcanic complex of the region. The Cascades Volcano Observatory (CVO) claims this is most likely only a typical tectonic swarm, however, it is being closely monitored. The local residents are warned not to panic.

A number of seismic stations around La Pine have reported an earthquake swarm is taking place in the region. The swarm seems to be located in the close proximity of a nearby volcano complex. An earthquake stack is not very strong, as the strongest of the detected earthquake which took place on October 22, 2015, was only 2.6 in magnitude. The Klamath County Emergency has asked people to stay calm, as there is no reason for the concern at the moment.

According to the county's Emergency Manager the current situation is being carefully monitored by a number of scientists, and more seismometers will be added to the network to ensure good quality monitoring, the USGS reported.

According to CVO, this area has experienced periods of elevated seismicity in the past. In June-August 2001, the PNSN located 6 events (maximum magnitude M2.6), and in July-August 2012 the PNSN located 20 events (maximum magnitude M1.1). Prior to the expansion of the Newberry seismic network in 2012 earthquakes were much harder to detect and locate in central Oregon in general and in this area in particular, so it is conceivable that other Crescent-area swarms could have occurred prior to 2012 that were not detected by CVO or the PNSN. 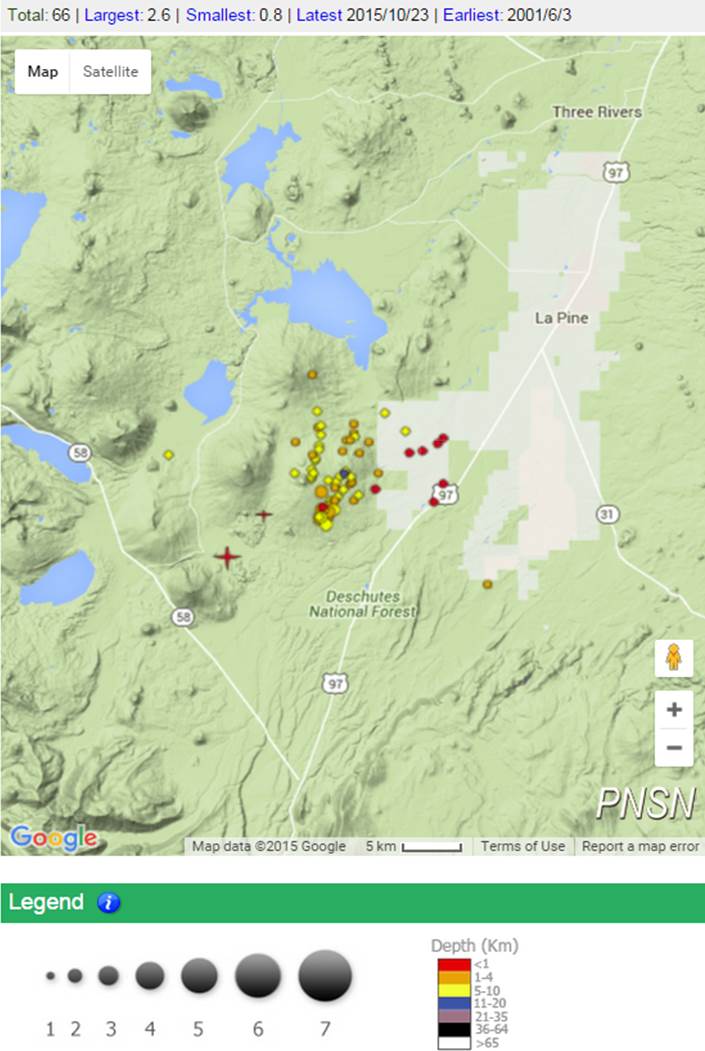 Earthquake depths are most likely all occurring in the upper 10 km (6 miles), according to geologists. Despite the low magnitudes, the number of shakes might be a cause of concern as they all seem to be situated around the Davis Volcanic Complex, situated only a couple of kilometers away.

Despite the close proximity of the volcano complex, the Cascades Volcano Observatory claims the swarm of shake is not a cause of concern and is most probably resulting from "typical" tectonic swarms.

However, some people think the geothermal energy project taking place at the Newberry Volcano might be the cause of an increased earthquake activity. According to KTVS, the AltaRock Energy's Newberry enhanced geothermal systems (EGS) project uses the so-called hydroshearing process, which utilizes cold pressurized water injections to break through solid rock. However, there seems to be no solid evidence that would support this, as no work has been done in the area for several months.

According to the PNSN the earthquake swarm is most likely only a "normal" set of shakes, and not a results of any work being done in the area or of a displaced magma chamber lying below the surface.

The magma chambers being displaced are a sign that a larger earthquake is about to hit the adjacent area, so this does seem a valid reason to remain on alert and carefully examine all the available data.