The swarm, located about 360 km (200 miles) west of the Cascadia Subduction Zone, is ongoing along the Blanco Fracture Zone, which is a strike-slip fault system on the edge of the Juan de Fuca plate.

The series started with M4.2 at 13:21 UTC and continued through the morning.

According to the forecast made by the USGS, there is a 1% chance of one or more aftershocks that are larger than magnitude 5.8 over the next 7 days.1

"Earthquakes in this region often come in swarms similar to this one," the USGS said.

"Because these quakes are generally small to moderate in magnitude and have a strike-slip focal mechanism (lateral or horizontal motion, not vertical), they are unlikely generate tsunamis. However, if they become larger, they might cause some increased local waves. 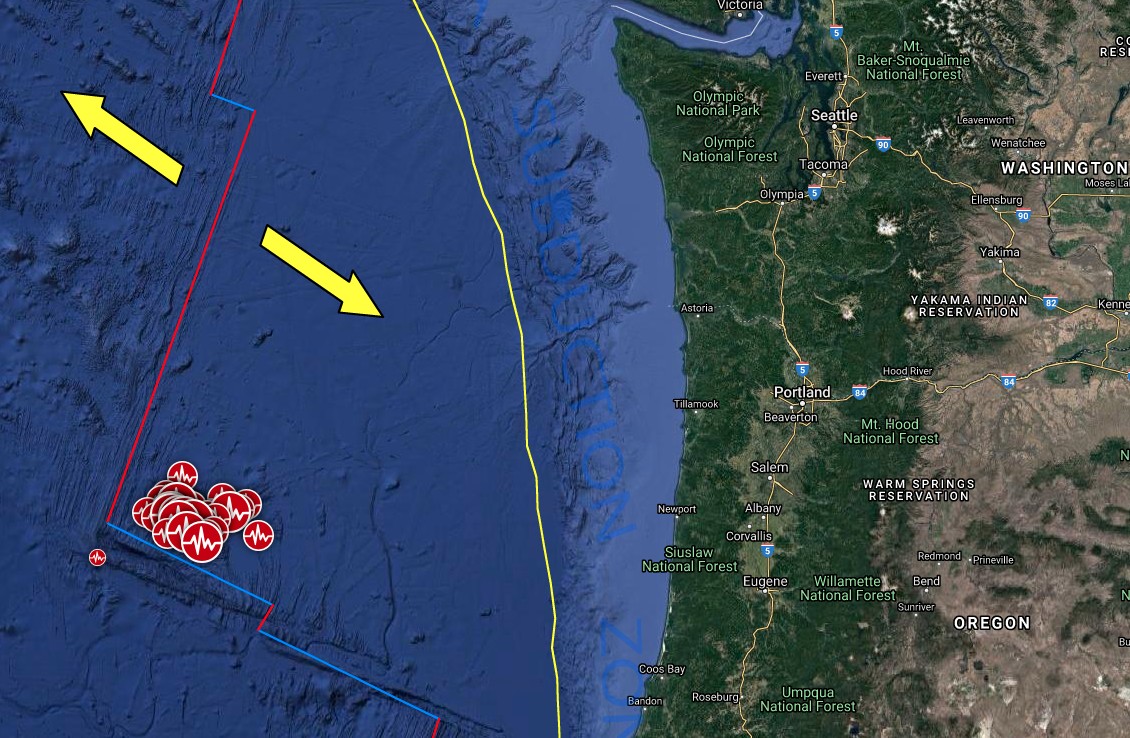 Currently, scientists are predicting that there is about a 37% chance that a megathrust earthquake of 7.1+ magnitude will happen at the boundary between the Juan de Fuca and North American plates, called the Cascadia Subduction Zone, in the next 50 years. This event will be felt throughout the Pacific Northwest.2

The last earthquake that occurred in this fault was on January 26, 1700, with an estimated magnitude of 9.0. This earthquake caused the coastline to drop several feet and a tsunami to form and crash into the land.

What is most surprising is that evidence for this great earthquake also came from Japan. Japanese historic records indicate that a destructive distantly-produced tsunami struck their coast on January 26, 1700. By studying the geological records and the flow of the Pacific Ocean, scientists have been able to link the tsunami in Japan with the great earthquake from the Pacific Northwest. Native American legends also support the timing of this last event. 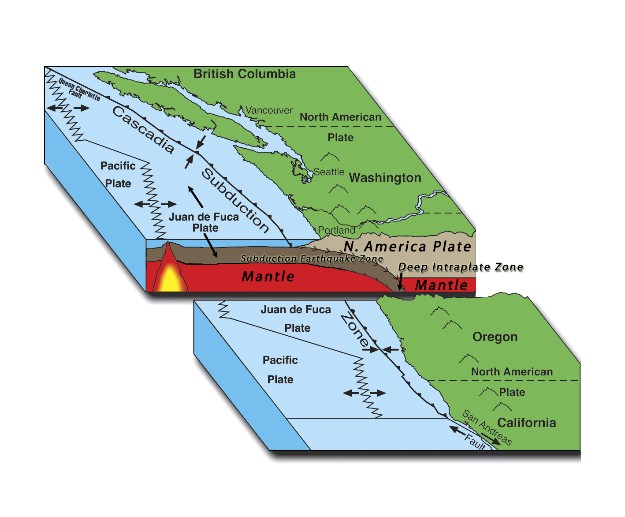 Oregon has the potential for a 9.0+ magnitude earthquake caused by the Cascadia Subduction Zone and a resulting tsunami of up to 30 m (100 feet) in height that will impact the coastal area. There is an estimated 2 – 4 minutes of shaking or rolling that will be felt along the coastline with the strength and intensity decreasing the further inland you are.

The Cascadia Subduction Zone has not produced an earthquake since 1700 and is building up pressure where the Juan de Fuca Plate is subsiding underneath the North American plate.